On 8th January, authorities demolished the Mullivaikkal memorial at Jaffna University, which was erected in 2019 to commemorate the tens of thousands of Tamil civilians who were killed in the final stages of the war in 2009. Students who peacefully protested the demolition at the gates of the university were surrounded by heavily armed members of Sri Lanka’s Special Task Force in an intimidating show of force. This is just the latest incident in a year which has seen a steep decline in respect for human rights in Sri Lanka and organised attacks by the state on protestors, lawyers, journalists, and human rights defenders. Yet Police Scotland recently renewed their training contract with the Sri Lankan police force until 2022.

Since 2006, Police Scotland have made 90 different deployments to Sri Lanka, training and supporting the Sri Lankan police force. Since 2015, the UK has also been rebuilding its relationship with Sri Lanka’s armed forces. This includes training programmes, joint military exercises, and diplomatic visits to senior commanders. As part of a gradual increase in engagement, a resident Defence Advisor post was re-established in Colombo in January 2019. The Sri Lanka Campaign are calling on the UK government to withdraw the Defence Advisor – you can join the campaign here.

Both Police Scotland and the Ministry of Defence claim that their engagement with Sri Lankan police and military forces is underpinned by a human rights approach. The Ministry of Defence has stated repeatedly that the Defence Advisor’s engagement works “to hasten the development of a modern, accountable and human rights compliant military,” and is based on improvements in the human rights situation in Sri Lanka, as well as conditions on the commitment of the armed forces to accountability, democracy, and transparency. In the same vein, Chief Superintendent of Police Scotland, David Duncan, said: “Police Scotland’s work in Sri Lanka is underpinned by a human rights approach. It supports the realisation of the United Nations Sustainable Development Goals, particularly gender equality, reduced inequality, peace and justice, strong institutions and partnerships to achieve goals.”

Many questions arise from the official claims. What exactly are the activities of Police Scotland and the Defence Advisor? Has this “human rights engagement” seen any meaningful and measurable improvement in the Sri Lankan security forces’ attitude to human rights? If not, given the ongoing militarisation, deteriorating human rights situation, and increasing suppression of dissent in the country, what conditions would actually lead to disengagement?

Unclear Activities of Police Scotland and the Defence Advisor

The training and engagement projects run by Police Scotland in Sri Lanka since 2006 have ranged from “capacity building” to “community policing” and, most recently, somewhat vague work to combat sexual violence and improve gender equality. There is little transparency about the content and activities beyond these buzzwords. Reports on the projects highlight a focus on “peacebuilding and reconciliation,” but there have been no significant reforms to the force over the sixteen years that Police Scotland have been engaging with Sri Lanka. In the  UK, “community policing” generally refers to a focus on building relationships and collaboration with the local community, yet we know that Police Scotland has trained Sri Lankan forces in riot policing and other methods not usually associated with “community policing.”

An undercover investigation in 2017 showed Police Scotland were training Sri Lanka’s Special Task Force, a para-military police unit which has been accused of human rights abuses, including extrajudicial killings and involvement in disappearances, since they were formed in 1983. The STF were on the frontlines during the civil war, and a UN investigation concluded that there are reasonable grounds to investigate their involvement in the mass atrocities committed in 2009. In June 2017, the STF assaulted medical students who were peacefully occupying the Health Ministry, and in July that year, a 17-year-old Tamil boy drowned after contact with the STF, who reportedly prevented people from rescuing him. And it is not just the STF who are accused of human rights violations. Freedom From Torture reports that torture is still deeply entrenched in the Sri Lankan police forces, while Human Rights Watch highlights ongoing forced physical examinations by the police, amounting to sexual violence and torture, and widespread rape in custody. 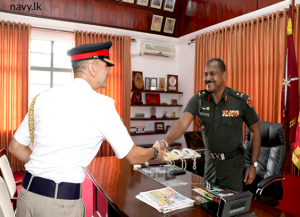 The activities and responsibilities of the resident Defence Advisor are even more unclear. We have identified at least five meetings between the Defence Advisor and senior military commanders who are credibly accused of involvement in war crimes and gross human rights violations. This includes:

Beyond these “cordial” meetings and photo opportunities put out by the Sri Lankan Army, we have little idea what the Defence Advisor does in Sri Lanka. Recently, we have seen him attending meetings with Silva in his role as the head of the Covid-19 response in Sri Lanka. It is not clear why the Defence Advisor is the most appropriate UK diplomat to attend updates on the public health situation in Sri Lanka, and his attendance risks legitimising the controversial militarisation of Sri Lanka’s Covid-19 response as well as Silva himself.

The funding for the Police Scotland training and the Defence Advisor’s post comes from the UK government’s Conflict, Stability and Security Fund, an opaque fund that has been criticised for its lack of effective review, evaluation and accountability. A review of the CSSF in 2018 showed that every human rights assessment for proposed projects was approved with no changes – raising questions as to how seriously human rights concerns are considered in these assessments.

Increasing Militarisation and A Culture of Impunity in Sri Lanka

The Sri Lankan military enjoys total impunity for human rights violations. To this day, almost no one has been held accountable for crimes committed during the civil war in Sri Lanka, or the many other human rights violations committed both before and after. The active programme of engagement between the UK and Sri Lankan armed forces and police forces lends legitimacy to the Sri Lankan military and police. Both regularly present their interactions with the UK military and Police Scotland as endorsements of their work. 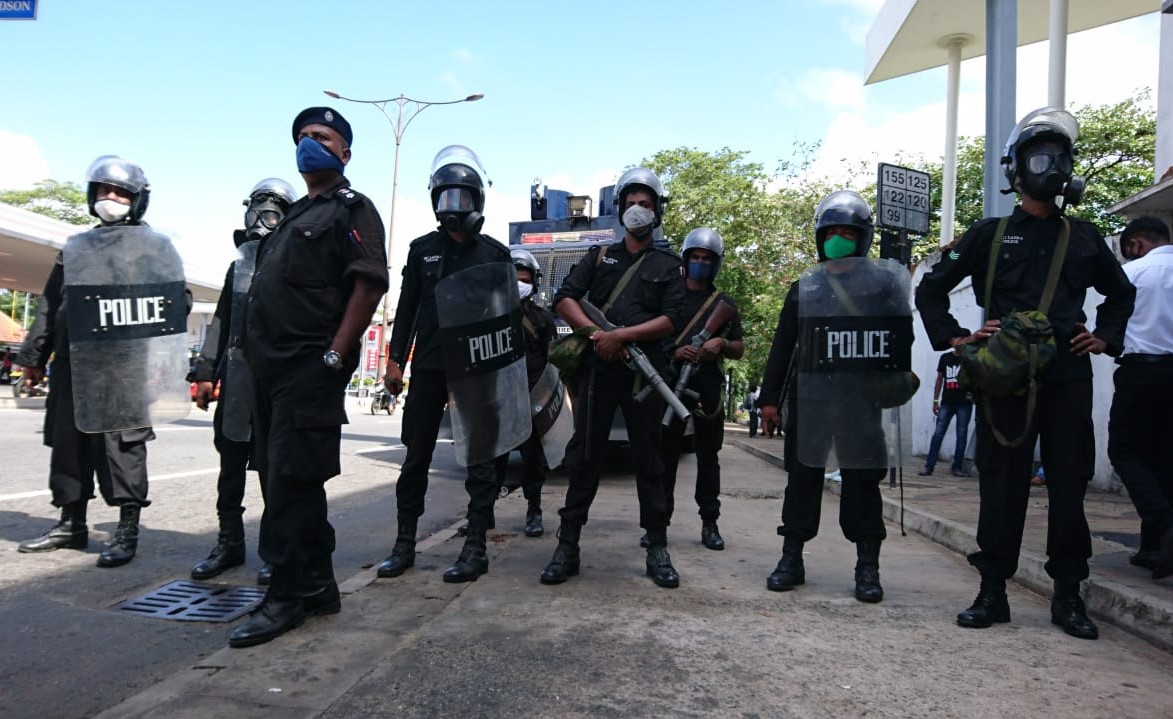 With the election of Gotabaya Rajapaksa and increased state suppression of dissent, the situation for human rights defenders and the country’s Tamil and Muslim populations has deteriorated. The Sri Lankan police force continue to show disregard for human rights, exemplified in their brutal crackdown on a peaceful Black Lives Matter protest in Colombo in June 2020 and their treatment of the families of the disappeared seeking answers about their loved ones. These families have faced increased surveillance and intimidation by police since Gotabaya’s election.

Individuals who have been credibly accused of war crimes are being promoted, not prosecuted. Shavendra Silva was appointed Army Commander eight months after the Defence Advisor arrived in Colombo. The President, Gotabaya Rajapaksa, himself accused of involvement in mass atrocity crimes, has pulled Sri Lanka out of international agreements to pursue justice for crimes committed during the war and has promised to protect soldiers from prosecution. In March 2020, he pardoned a soldier convicted of murdering eight Tamil men and boys in 2000, including a five-year-old child. The country’s response to COVID-19 has been heavily militarised, led by Army Commander Shavendra Silva. The passing of the 20th Amendment last year was a clear step towards authoritarian government by one man. Progress on democracy, accountability, transparency, and ethics has not only stalled, but been reversed.

These steps undermining justice and accountability are surely a clear breach of the UK government’s conditions of re-engagement. It is unclear how the activities of Police Scotland and the Defence Advisor are aimed at preventing future abuses, when those who were involved in crimes during the war have now risen to leadership positions within the STF, the army, and the government. Police Scotland claim that their training courses “have a direct influence on the professionalism of policing within Sri Lanka,” but offer no evidence of impact and improved human rights in the country. In fact, the International Truth and Justice Project reports trainees in the STF being instructed by senior officers to disregard training from the Red Cross, concluding that “no amount of training will remedy this culture of impunity for grave violations, which is institutionalised and systemic.”

Police Scotland and the UK government claim that their engagement promotes human rights and is based upon conditions of improving human rights in the country. Yet how effective can their engagement be when the most senior position in the Sri Lankan military is occupied by an individual credibly accused of mass atrocity crimes and gross human rights violations, while the police use military tactics to suppress legitimate protest and operate with little accountability?

Far from encouraging “the development of a modern, accountable and human rights compliant military”, British engagement with the Sri Lankan armed forces and police boosts the reputation of state forces that operate with total impunity. Police Scotland’s training projects have been running for sixteen years and seen no significant security sector reform or structural change nor improvement in attitudes to human rights.

What conditions would lead to disengagement, if the deterioration in democracy, human rights, and accountability in the country since President Gotabaya Rajapaksa’s election have not been serious enough?

Why is there such a lack of transparency about the activities of Police Scotland and the Defence Advisor – what exactly are they doing to improve human rights and challenge impunity in Sri Lanka? Why have we not seen any change or reform in the years of training and engagement?

What message does the UK send to Sri Lanka’s human rights defenders, oppressed Tamil and Muslim populations, and brave victim-survivor communities with this tacit support for the forces that continue to target them and trample on their rights?