A fight in parliament

Only weeks after the shoot-out between politicians Bharatha Lakshman Premachandra and Duminda Silva that left Premachandra dead, another altercation took place on Monday the 21st, this time within the seat of power. 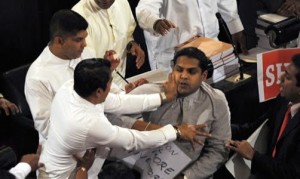 Members of Sri Lanka’s ruling party, the United People’s Freedom Alliance, attacked the opposition who were protesting inside parliament about President Rajapaksa’s budget. Punches were thrown in front of the President.

According to reports, members of the United National Party – no strangers to human rights abuses themselves during their own time in power – tried to hold up placards saying “shame” on the House floor in protest of the proposed budget, which they said did not contain enough measures to help people who were struggling economically. They were then surrounded by lawmakers who punched them, grabbing their placards.

Since the incident, Chamal Rajapaksa, speaker of Sri Lankan parliament and eldest of the Rajapaksa brothers (who include the President, the defence secretary and the Minister for Economic Development), has appointed a committee to investigate. However, like other investigations run by the government (such as the discredited Lessons Learned and Reconciliation Commission) the probe is likely to pay lip-service to objectivity and free the government of any blame

“Speaker Chamal Rajapaksa has ordered to initiate an investigation into the unacceptable behavior exhibited by some MPs in the House during the budget speech by President Mahinda Rajapaksa,” Maithripala Sirisena, health minister and secretary of the the largest party in the governing coalition, the SLFP, said on Wednesday.

Sirisena condemned the opposition MPs’ behaviour at a media conference and denounced their actions of bringing in placards and posters and disrupting the budget speech. He accused the opposition party of instigating an incident to create a display for invited foreign diplomats in the gallery.

“It was their premeditated plan to disrupt the presentation of the budget,” the Minister has said.

The consensus among the SLFP is that they were the wronged party, forced to engage in violence by the provocative behaviour of the opposition. Yet the right to protest is an essential component of any democracy, and the UNP MPs were protesting in a peaceful manner.

This incident is a fitting symbol of the state of the country. Those at the heart of power are engaged in violence and ruthless suppression.

After the incident, opposition leader Ranil Wickremesinghe told reporters: “Today our Parliament became a symbol of lawlessness…What wrong did we commit?”That same question could be asked by the thousands of minority groups who have been subjected to brutality, violence and displacement by this government, and before them by the LTTE and UNP, the scores of journalists who have been murdered and the dozens of others who have been chased out of the country.