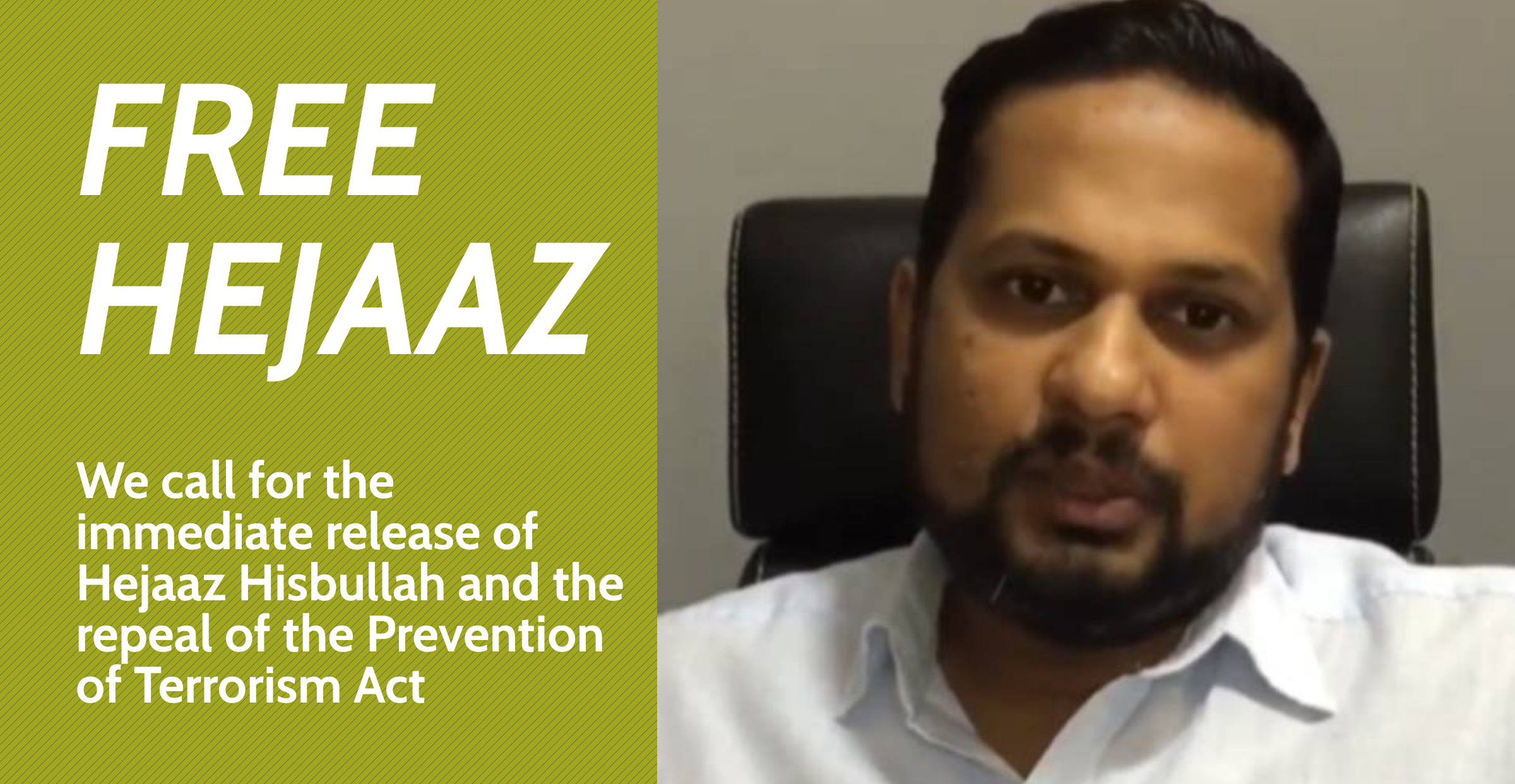 On 14 April 2020, prominent human rights lawyer Hejaaz Hizbullah was arrested by Sri Lankan security forces under the draconian Prevention of Terrorism Act (PTA) for alleged involvement in the tragic Easter Sunday bombings in 2019. Hejaaz has been denied unrestricted access to his family and lawyers for most of his detention, and was only charged in March 2021, including on the vague charge of “inciting communal disharmony” under the PTA. One year after his arrest, the full details of charges against him are still unclear and no evidence of his involvement in the bombings has been provided by the police. He remains in detention.

His case is one among many that have created a climate of fear among activists and minority communities. Hejaaz’s family believe that his arrest is in retaliation for his work as a lawyer and his peaceful activism for the rights of Muslims.

The arrest and detention of Hejaaz comes in the context of increased suppression of dissent by the government of Sri Lanka, rising Islamophobia and hate speech against Muslims, and the ongoing use of the Prevention of Terrorism Act to detain individuals on vague charges. No reason was given at the time of Hejaaz’s arrest, and many legal and nongovernmental groups have brought attention to the lack of due process and fair trial rights in denying Hejaaz access to his lawyers and repeatedly renewing his 90-day detention orders. Three children have alleged that the police attempted to coerce them into making false terrorism allegations against Hizbullah.

Repression of dissent and increased intimidation of human rights defenders, victims, journalists, and lawyers, has been intensifying under President Gotabaya Rajapaksa. The crackdown on dissent has included intimidation, death threats, physical assaults, and arbitrary arrests of activists, as well as increased surveillance and intimidation by security forces. Data collated by INFORM show incidents of repression of dissent averaging over one a day in 2020. Incidents include beatings, arbitrary arrests, surveillance, death threats, and hacking of electronic devices.

Hejaaz’s arrest coincided with a surge in anti-Muslim sentiment in Sri Lanka, which has  been on the rise in recent years, especially since the Easter Bombings in 2019. Hundreds of Muslims were arrested in the aftermath of the attacks, often under the PTA. Since the start of the COVID-19 pandemic, Muslims have been scapegoated and stigmatised as “super-spreaders.” The government’s policy of forced cremation for Covid victims was carried out without scientific evidence and contradicted WHO guidelines.  Families said this policy was deliberately targeted at Muslims and it was widely condemned by the international community. There is a clear pattern of Islamophobic sentiment, rhetoric and policy, from government and media, and Hejaaz has been a prominent advocate for the Muslim community.

In her recent report on Sri Lanka, the High Commissioner for Human Rights referred directly to Hejaaz’s detention among her concerns over new threats to human rights in the country: “The High Commissioner is concerned that the Government has continued to use the Prevention of Terrorism Act (PTA), despite repeated calls over many years by United Nations human rights mechanisms to repeal it. For instance, on 14 April 2020, police officers arrested prominent lawyer Hejaaz Hizbullah at his house. No detention order was given to him until 25 April 2020. His legal chambers were searched and materials seized. Hizbullah has been under renewable 90-day detention orders since then, under investigation for alleged involvement in the April 2019 terrorist attack in Colombo and for engaging in activities deemed ‘detrimental to the religious harmony among communities’ and alleged indoctrination of children into extremism.”

The Prevention of Terrorism Act, used to arrest Hejaaz, is a repressive piece of legisation, enabling arbitrary arrest and prolonged detention with minimal legal oversight. International actors, such as the EU and the High Commissioner for Human Rights, and previous consensus resolutions at the Human Rights Council, have called for its repeal on the basis that it is not in line with international standards on human rights. Despite promises by the previous government to repeal and replace the PTA – promises which enabled Sri Lanka to obtain access to the EU’s “GSP+” preferential trading scheme in 2017 – the legislation remains in place, and continues to be used to harass and threaten critical voices on the island, particularly targeted against voices from Tamil and Muslim communities.

We are very concerned by Hejaaz’s ongoing detention and call for his immediate release. We also call for the immediate repeal of the Prevention of Terrorism Act, which is not in line with Sri Lanka’s international human rights commitments. All Sri Lankan citizens are entitled to protection from arbitrary detention, access to legal counsel, and a fair trial.

Denied due process, fair trail and proper access to lawyers and family, he remains in detention without any credible evidence being put before a court.#JusticeForHejaaz pic.twitter.com/SdHhW861uf