We are pleased to announce tomorrow’s opening of ‘Afterlife’ at the Saskia Fernando Gallery in Colombo – a photography exhibition exploring trauma, memory and culture in the context of the final stages of Sri Lanka’s civil war and its aftermath. Following a preview evening on 27th October, the exhibition will run until 20th November 2016.

A note from the artist, Cassie Machado, about the exhibition:

“Afterlife (2011-2016) is a body of work, which reflects on the final stages of the Sri Lankan civil war, and is a meditation on its trauma and its memory. As well as implying an engagement with the afterlife of events and of images, the title Afterlife is inspired by the traditional beliefs towards death in Hinduism and Tamil culture – which require a series of funeral rites or acknowledgements symbolising closure to be performed as a means of safeguarding the peaceful onward journey of the self or soul into the afterlife for reincarnation. 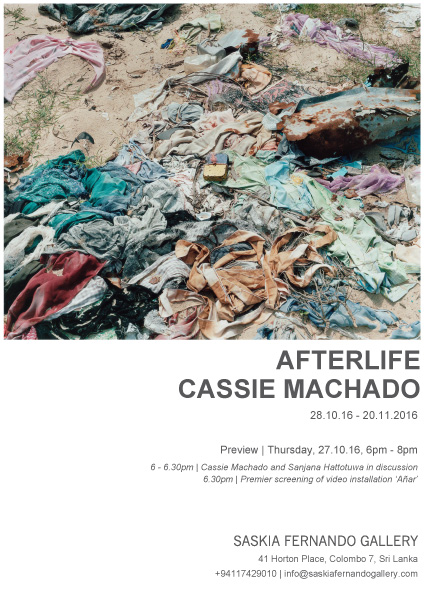 In the final stages of the Sri Lankan civil war, which was fought on the island’s northern shorelines on an otherwise idyllic spit of land known as Mullivaikkal, it is estimated that between 40-70,000 civilians died in the last months of fighting alone. In this period, the vast majority of families were physically unable to perform all, if any, of the traditional obsequies for their lost departed. According to the traditions of Hindu and Tamil cultural beliefs, as their deaths were left unmarked, the souls of the deceased were perpetually left to wander restlessly as spectres in an obscured twilight realm. Occupying a space between reality and fiction, politics and poetics, Afterlife seeks an end to this twilight for the dead and also some illumination for the living.”

For further information about the event, please click here. For those unable to attend, the majority of the work is also available to view online here.