In a statement released today in the Mail and Guardian (South Africa) Archbishop Desmond Tutu and 38 Human Rights activists and organisations from around the world demanded that the UN Human Rights Council set up a Commission of Inquiry to investigate war crimes and crimes against humanity committed in Sri Lanka.

If you want to support the call, please sign this petition. Here is the statement and list of signatories in full.

We, concerned individuals and organizations from around the world, urge the UN Human Rights Council (UNHRC) to use their March 2014 session to pass a resolution that will include a commitment to an Independent International investigation in the form of a Commission of Inquiry. Only this will help to put the country on the path to justice and reconciliation.

Although the long-running civil war ended in May 2009, a lasting peace is not in sight and we remain gravely concerned for the future of the people of Sri Lanka. A fear and sense of injustice persists, not just among minorities and political activists, but among ordinary people desperately trying to rebuild their lives. A number of unresolved issues remain, including ongoing human rights violations, credible allegations of crimes against humanity and war crimes, and the lack of progress towards longer-term political solutions and reconciliation. Left unaddressed, these issues could lead to renewed conflict.

Post-conflict processes do take time, but what matters is getting on the right path. Nearly five years after the war ended, the situation appears to be getting worse, not better.

The biggest issue Sri Lanka faces is a systemic lack of respect for the rights of its citizens, particularly – but not exclusively – its minority citizens. This is rooted in a culture of impunity which is in turn rooted in a failure to hold to account those, on both sides, who committed some of the worst atrocities this century.

Only an independent international investigation of these atrocities will end this culture of impunity and give the people of Sri Lanka a chance to climb out of the cycle of violence towards a lasting peace. For these reasons, there have been numerous calls over the years for such an investigation: from a renowned panel of experts appointed by UN Secretary General Ban ki-Moon, from UN High Commissioner for Human Rights Navi Pillay, from a host of Sri Lankan and international individuals, Non Governmental Organisations, and politicians, and from many thousands of petitioners all over the world.

We represent organisations and individuals in many countries. The Sri Lankan Government claims that attempts to set up an international inquiry in Sri Lanka come exclusively from the west, and represent a form of imperialism. Not so. Many of us come from countries that have also seen conflict, and attempts at reconciliation after it. We know Sri Lanka is going to need help from the international community to get back on track. Standing in solidarity with the many Sri Lankans who feel their government is making a mistake, we urge the United Nations to establish a Commission of Inquiry. 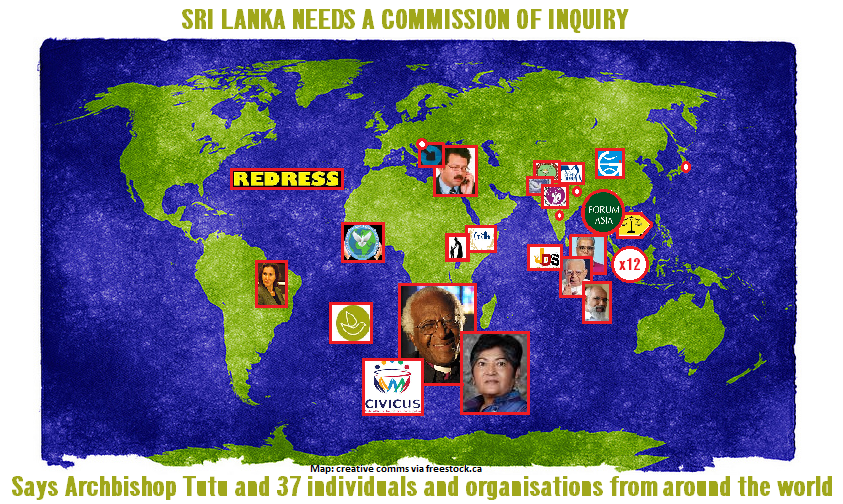