Al Wasat is the biggest selling broadsheet in Bahrain. They just published an article (in Arabic) on the increasingly aggressive attacks on Sri Lanka’s Muslim community. The article was based on the work of the Minority Rights Group and their recent report on the same issue (also available in Arabic).

It should be noted that since this report BBS, who feature in the report substantially, have opened a leadership academy. The President’s brother Gotabaya Rajapaska was guest of honour at the opening and spoke effusively about BBS. Another mosque was also recently vandalised and a pig was drawn on it.

You can read the report below in English, or in Arabic here, or in French here, or in Spanish here:

Sri Lanka is facing a new wave of brutality that has seen minority Muslims subjected to violence and persecution, often at the hands of militant Buddhists.

There have been scores of attacks on the country’s Muslims in recent weeks. Widespread death threats have also been reported in what appears to be part of a growing campaign to destroy Muslim communities or drive them into exile.

Sri Lankan officials have been accused of openly encouraging hostility towards Muslims. Such claims risk undermining fragile efforts to foster ethnic harmony on an island still reeling from the bloody 2009 conclusion to the civil war between government troops and ethnic Tamil rebels. 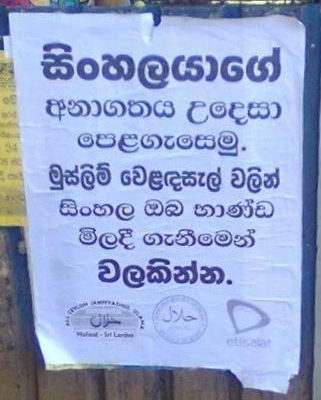 And with international focus still directed at well-documented atrocities committed by both sides during the conflict, the plight of the island’s marginalised Muslims is in danger of being overlooked by the global community.

Efforts to persecute Muslims have gathered pace in recent weeks. They have coincided with the emergence of Bodu Bala Sena — or Buddhist Power Force — an increasingly hardline pressure group that campaigns to promote Buddhism and the cultural interests of the country’s ethnic Sinhalese majority.

The group, which counts many Buddhist monks among its ranks, last month rallied thousands of supporters in the Sri Lankan capital Colombo to call for an abolition of halal methods used to prepare food according to Muslim beliefs.

They have also demanded measures to increase Sinhalese dominance in Sri Lanka. These include an end to birth control so that Sinhalese population numbers will flourish, and calls for some proponents of Islam to be banished.

Intimidation aimed at of other aspects of daily Islamic life is also now disturbingly commonplace in Sri Lanka. Wearing of beards by men, traditional hijab veils by women and the observance of prayer times have all been condemned by extremists seeking to fuel sectarian hatred.

Bodu Bala Sena insists it is not involved in any intimidation or violence directed at Muslims, blaming duplicate groups.

Nevertheless, the persecution of Muslims through attacks on mosques, death threats, business boycotts, and property seizure is on the rise. There are also claims that women have been forcibly sterilised.

“I feel there is no space for any religion other than Buddhism in this country,” says Shreen Abdul Saroor, a Muslim Sri Lankan human rights worker. “It breaks our hearts that, since the end of the war, intolerance and hatred towards all the minority communities have grown to this extent.”

Much of this persecution is carried out with apparent impunity. Sri Lanka’s president, Mahinda Rajapaksa, has urged Buddhists to promote religious harmony, however in some cases senior government figures have been accused of supporting policies aimed at restricting Muslim activities or even of involvement in direct action.

One Sinhalese government minister, Mervyn Silva, staged raids on Muslim properties to seize hundreds of cattle earmarked for ritual slaughter. Silva insisted any animal deaths would violate Buddhist principles and threatened brutal punishment for anyone who went against him.

Muslims say some elements of Sri Lanka’s mainstream media have sought to legitimise restrictions on religious freedoms by portraying the country as a Buddhist nation at risk from aggressive “Islamisation.” They fear such views have support at the highest level.

Last April the government ordered the removal of a mosque at Dambulla, a Buddhist pilgrimage town north of Colombo, following disputed claims that the 60-year-old structure had been built in on land belonging to a Buddhist temple.

Issued by Prime Minister D.M. Jayaratne, the order followed an incident in which a mob led by Buddhist monks tried to storm the mosque during Friday prayers. Protesters broke through police lines and caused damage to the building as well as copies of the Quran and other sacred texts.

The incident has raised ethnic and religious tensions that were already high in the aftermath of the civil war. It has provoked concerns that, after years of stoking Buddhist extremism for political gain during the recent war and subsequent elections, the government has created a ruthless and unpredictable force it is now incapable or unwilling to control.

Muslims are traditionally tolerated by the Sinhalese who make up three quarters of Sri Lanka’s population of 21 million. Following the forcible expulsion of 72,000 Muslims from Tamil-controlled northern territories in 1990, Sinhalese leaders sought Muslim support in the conflict.

But there are now fears that the Dambulla attack could be the catalyst for more widespread sectarian violence in Sri Lanka in the same way that the 1992 destruction of a mosque in the Indian city of Ayodhya led to successive waves of deadly violence.

Such concerns are borne out by a litany of other incidents in which Muslims have been subjected to low-level harassment, direct threats or violence.

In May last year stone-throwing protestors damaged a mosque in Dehiwala on the outskirts of Colombo. Meanwhile, in the northern town of Kurunegala, Buddhists forced users of another mosque into signing a document pledging not to use the building for religious purposes.

Kurunegala was the scene of further unrest in July when a group of 150 protestors led by a Buddhist monk entered a mosque and threatened worshippers. In the same month, Buddhists persuaded police to close down a mosque on the outskirts of Colombo and, separately, a Muslim educational centre.

August 2012 saw the launch in Dambulla of a public campaign calling for a boycott of Muslim shops. Leaflets distributed around the town also urged people not to sell land to Muslims and claimed that the Sri Lanka’s Muslim population would rise from eight to 30 percent within a decade. Similar campaigns have since been held in other parts of the country.

The anti-Islamic movement now seems to have any institutions or buildings with Muslim connections in its sights. Last October, thousands of demonstrators congregated on Bangladesh’s embassy in Colombo to rage against the treatment of Buddhists in the Bangladeshi region of Chittagong. Sri Lanka’s law college has also suffered an attack in January over claims that the legal profession was being dominated by Muslims.

Also last October, unidentified attackers torched a mosque in the northern city of Anuradhapura. Muslim worshippers were forced to reconvene in a nearby family home which is now facing calls for closure from Buddhists. Muslims here have also faced demands for their expulsion.

In recent weeks, the campaign against halal products mounted by Bodhu Bala Sena has generated ugly demonstrations. It has also spilled over into social networking websites, which are being used to spread messages of hatred and insults to Islamic beliefs and texts.

Sri Lankan rights groups have demanded investigations into these attempts to persecute and intimidate investigations. Many incidents, particularly the government’s order to remove the Dambulla mosque, clearly flout international conventions on minority rights and religious freedoms.

Human rights abuses are a feature of life in Sri Lanka, where the rule of law appears to be deteriorating. Such problems belie the peaceful image of the island that is promoted to the crowds of foreign tourists it attracts annually.

Tens of thousand of Tamil civilians who survived the civil conflict are still interned in squalid camps. Extra-judicial killings have been documented, as have many attacks on journalists, lawyers and aid workers.

The targeting of Muslims and other religious minorities adds a disturbing new dimension to the appalling situation in Sri Lanka and strengthens the urgent need for international action.

Human rights campaigner Saroor says such persecution alongside abuses perpetrated during and after the civil war, demands the attention of the United Nations.

“The Sri Lankan government must be held accountable by the UN Human Rights Council for war crimes and continuous infringement of minority rights.”