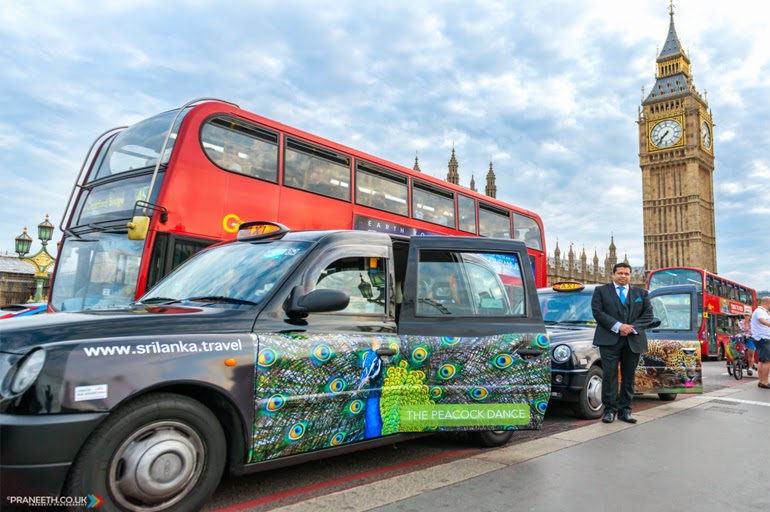 The Sri Lanka Tourism Promotion Bureau has launched a major advertising campaign across the UK’s major cities. The ongoing 12-week long campaign, launched at the request of the Sri Lankan Ministry of Economic Development and paid for by the Sri Lankan taxpayer, has seen a fleet of 450 cabs, adorned with colourful advertising materials, rolled out across London, Manchester and Birmingham.

This recent drive is the latest part of what the Bureau calls its ‘Global Mega Promotional Campaign’ which has so far targeted major cities in France, Germany, Korea and Japan and which has already been credited with significantly boosting demand for Sri Lankan travel packages. Tourism has more than doubled to a million visits per year since the war ended and the Sri Lankan Government is looking to make it double again by 2015.

Yet while the booming tourism industry continues to bring many benefits to the Sri Lankan economy, the vibrant billboards belie the often much darker reality in which many ordinary Sri Lankans live – one in which torture, sexual violence, disappearances, extra-judicial murder and government intimidation are the norm.

Without a clear understanding and appreciation of this reality, prospective travelers risk unwittingly supporting the Sri Lankan Government’s lie: that Sri Lanka is a country now at peace with itself. Worse still, by visiting Sri Lanka without knowing the facts, they face the very real danger that the money they spend there will inadvertently line the pockets of known human rights abusers who own, or are linked to, individuals implicated in war crimes, crimes against humanity and other grave human rights abuses.

A short survey that we have carried out has revealed that many such businesses are being actively promoted by the very Sri Lankan Tourism Board website which this latest black cab campaign endorses.

These include, but are not limited to:

What can you do?

As illustrated by the full list featured as part of our online Ethical Tourism Campaign, such cases represent merely a few of the many businesses to be avoided in a trip to Sri Lanka. Yet with careful thought and planning, a visit to Sri Lanka can reduce the benefits to the regime, and increase the extent to which tourism can support the local population. If you are intending to travel to Sri Lanka, the key thing is to make an informed choice – by understanding the current situation, finding out what businesses to avoid, and identifying the many ethical alternatives available.

And in the meantime, it is vital that those with an interest in Sri Lanka’s future continue to question and challenge the false picture presented by the Government of Sri Lanka through advertising campaigns such as this. So we need your help.

We want you to keep an eye out for these cabs in UK cities, to photograph them, and to share your images with us by email or through social media, using the hashtag #WarCrimesHolidays with a link to our Ethical Tourism Campaign. And you can voice your disapproval at the UK companies who help support the Sri Lankan government’s tourism whitewash by contacting the advertising firm, Media Agency Group, who supported the recent black cab campaign, here.

By doing so, you will help spread the message that there is more to a Sri Lankan holiday than meets eye.

NB: If you choose to photograph these latest advertisements, please be polite and do not impede the taxi drivers who do not have a say in what is put on the outside of their vehicles.