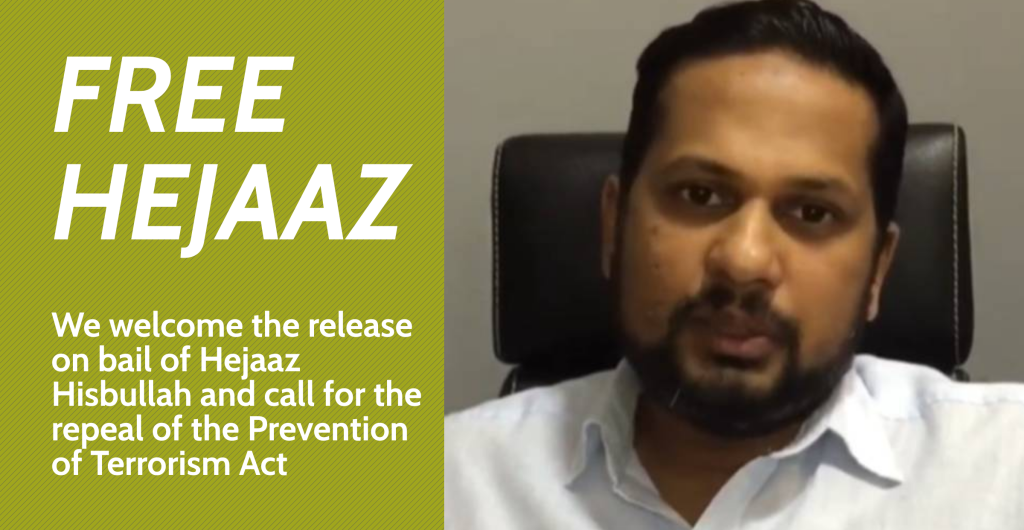 On 7 February 2022, after more than 21 months in detention, the Colombo Court of Appeal granted bail to Hejaaz Hizbullah, a prominent human rights lawyer and activist. Hejaaz was initially arrested by Sri Lankan security forces on 14 April 2020 under the draconian Prevention of Terrorism Act (PTA) for alleged involvement in the 2019 Easter Sunday bombings; however, in March 2021, he was instead with ‘inciting communal disharmony’, a speech-related offence that is one of a number of overly broad offences in the PTA that have long been criticised by human rights activists and legal experts.

Hejaaz was released from detention on 9 February. He will now be able to return home and will finally be able to spend time getting to know his young daughter, who was born after Hejaaz’s arrest.

We would like to say a big thank you to all of our supporters who added their voices to the campaign to release Hejaaz. Of course none of this would have been possible without the incredible determination and commitment of Hejaaz’s family, friends, and legal team who fought for his release in the face of smear campaigns designed to discredit Hejaaz. The Justice4Hejaaz campaign, led by Hejaaz’s family, has campaigned tirelessly for his release. Hejaaz’s case was also highlighted by many Sri Lankan civil society groups and international NGOs. Amnesty International’s designation of Hejaaz as a  ‘prisoner of conscience’ who had been targeted for his human rights advocacy helped to draw global attention to his case.

However, whilst we take a moment to celebrate Hejaaz’s release from detention, we must remember that his fight against these unsubstantiated charges is far from over. The trial will continue, despite the authorities having yet to provide any evidence against him.

Hejaaz was detained for almost two years, and whilst in detention, he was denied unrestricted access to his family and lawyers. Many others who have been arrested under the PTA have experienced similar restrictions on their due process rights and have also reported torture and abuse by security officials. Ahnaf Jazeem, another Muslim PTA detainee who was arrested in connection with Hejaaz’s case and was recently granted bail, said in an interview after his release that he had been threatened, assaulted, and intimidated by officers of the Terrorism Investigation Department during his detention. Hejaaz and Ahnaf are just two of hundreds of Muslims who have been detained under the PTA following the deadly Easter bombings in 2019. While Hejaaz and Ahnaf have both eventually been released on bail after sustained campaigning and international attention,  hundreds of people remain in detention under this draconian law, often languishing in prison for months or years without trial.

Read more about the PTA, as well as other human rights issues in Sri Lanka, in our latest report.

In recent months, several high-profile detainees have been granted bail and the government has promised limited superficial reforms to the PTA. However, the proposed reforms will have little practical effect and will do nothing to address the major problems with the law identified by Sri Lankan civil society and UN experts. The Prevention of Terrorism Act is still far from meeting international human rights standards. A recent report by Human Rights Watch has detailed how the PTA is a repressive piece of legislation which allows for arbitrary arrest and considers confessions as admissible evidence , which effectively encourages torture in detention.

Human rights defenders and Tamil and Muslim communities who have been most affected by the PTA continue to call for its repeal, and for a complete and immediate moratorium on its use in the meantime. International actors, such as the EU and the High Commissioner for Human Rights, have also repeatedly called for its repeal. The European Union, as well as the UK, India, and other states that are committed to human rights and a sustainable peace in Sri Lanka must to use both bilateral and multilateral mechanisms as leverage to encourage the government to place an immediate moratorium on the use of the PTA, and to finally repeal this repressive Act. 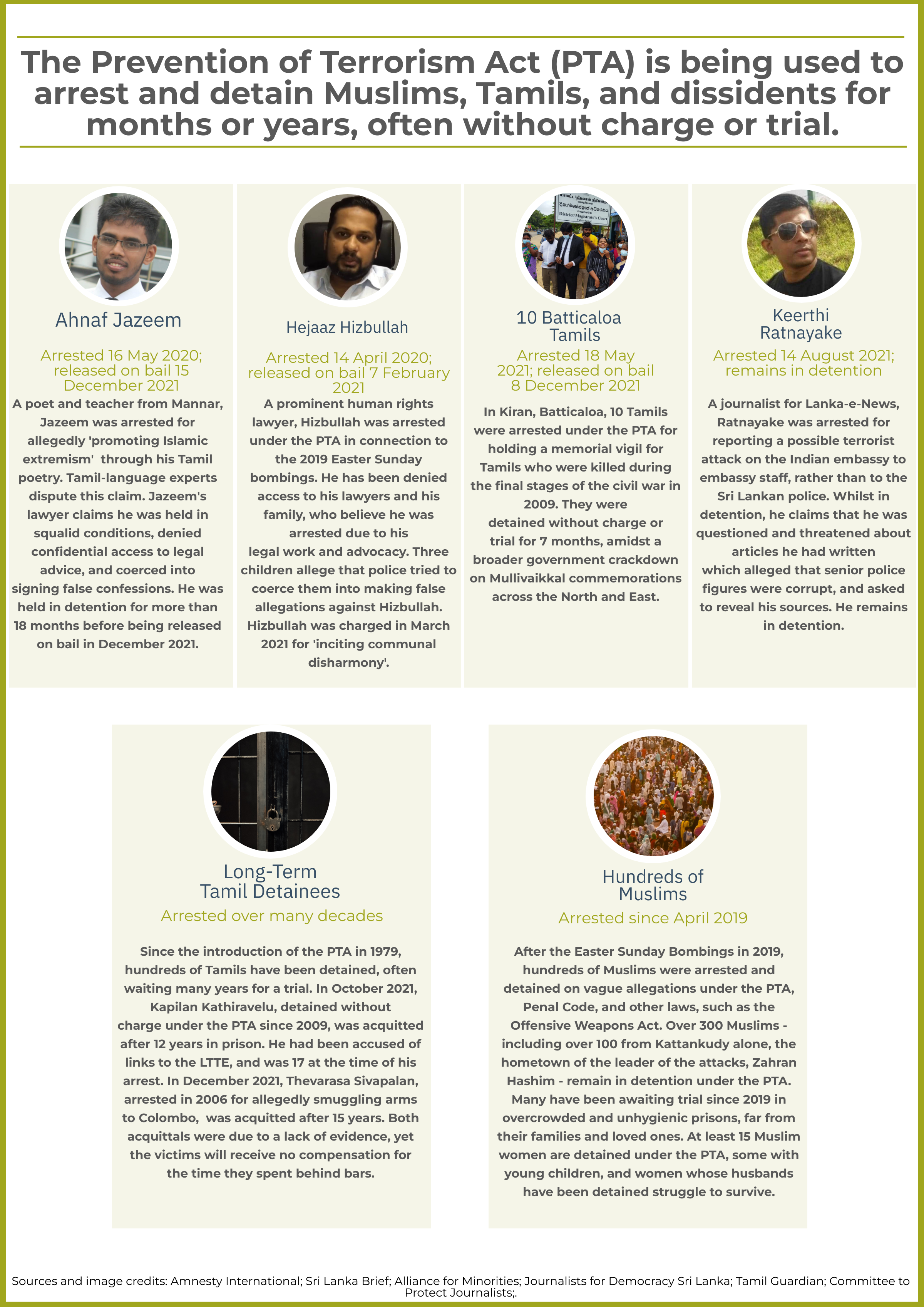 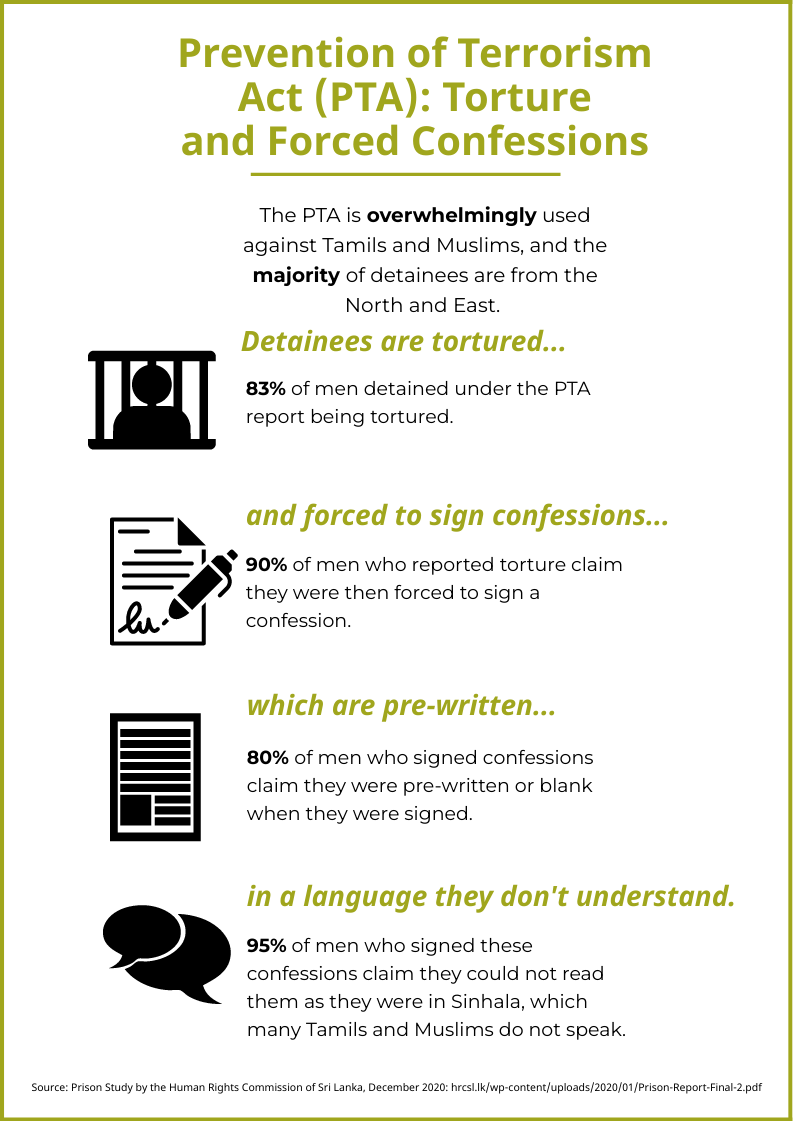