It’s been just under three weeks since Gotabaya Rajapaksa became President of Sri Lanka, and already there are some worrying signs of the chilling effect his victory is having on press freedom and civic space on the island.

Several important commentators, from both the North and the South, have locked their social media profiles or withdrawn from online platforms altogether. Others have felt compelled to trawl through their account history to delete posts that might risk making them a target. The tweet below – posted by an anonymous Tamil journalist responsible for many important recent despatches from Sri Lanka’s war-affected North and East – is but one example of the challenges which many now face.

Decided to leave this platform for awhile due to security concerns coupled with systematic racist-hatred-threatening campaign leveled against me soon after alleged war criminal @GotabayaR took office;deeply grateful for those who supported me in past. #Journalism_Is_Not_A_Crime

Earlier this week, the human rights group Reporters Without Borders (RSF) highlighted four shocking instances of attempts by the Sri Lankan authorities to intimidate members of the press. In the North of the country, police officers visited the offices of the Tamil-language newspaper Thinappuyal and demanded information about its staff. In Colombo, three news outlets – all of whom backed opposition candidate Sajith Premadasa in the Presidential race – were raided by intelligence officials, with several staff members subjected to lengthy questioning.

Few are in doubt about what is driving this trend. In one of the cases described above, members of the police, having presented newspaper staff with an out of date warrant, proceeded to scan the office’s computers for one search-word in particular: ‘Gota’.

Elsewhere, observers have highlighted a subtler shift towards forms of self-censorship, with commentators sticking to ‘safe’ subjects or avoiding sensitive issues entirely. In one account of this trend, a Colombo-based journalist, who has for several years written a weekly column for a national newspaper, cited a sudden and unprecedented refusal by the editor to publish his latest piece. The explanation offered by the editor? “Orders from above.”

As the journalist in that case explained, highlighting the incoming administration’s ability to curb the press while denying its involvement in censorship: “This jettisoning [of critical voices] will not be based on orders from the Presidency. The President’s reputation and the Rajapaksa legacy is enough to instil fear.” 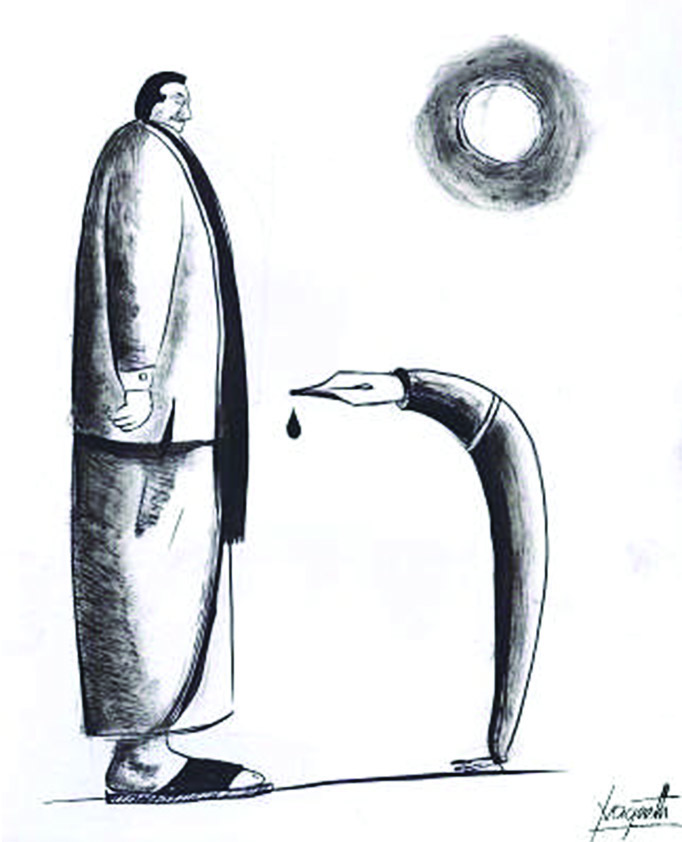 A cartoon by Prageeth Eknaligoda, who was abducted and disappeared while on his way home from work in Colombo in 2015.

That legacy is one that will loom large in the minds of press workers living in Sri Lanka, dozens of whom, mostly Tamil, were killed or disappeared during the reign of former President Mahinda Rajapaksa (2005-2015). One newspaper editor, Lasantha Wickrematunge, was killed in broad daylight having foretold his own murder. The astonishing recent abduction of a member of local staff attached to the Swiss Embassy in Colombo will no doubt fuel the sense of vulnerability felt by many journalists working in Sri Lanka today – and re-ignite the perception that no one is ‘untouchable’.

To be sure, media freedom was a significant area of progress under the government of former President Maithripala Sirisena (2015-2019). However, the increase in breathing space was not one that was shared evenly. There are many instances in which journalists, and especially Tamil journalists, were harassed, intimidated and sometimes physically assaulted over the last five years. Earlier this year RSF raised the alarm about a resurgence of attacks on Tamil press workers following three incidents in the North and East.

On one reading, recent attempts to stifle the press in Sri Lanka are but the ‘sting in the tail’ of this period of increased openness. The intelligence and security structures of the state did not disappear under the previous government, nor were perpetrators of crimes against press workers held to account. As a result, many fear that their criticism of the government over the last five years may now leave them exposed.

It is the responsibility of members of the international community, some of whom have sought to foster the freedom of the press in Sri Lanka in recent years, to act to protect those now at risk. Should efforts to curb media freedom succeed, it will not only undermine the ability of Sri Lankans hold their government to account. It will also impair the free flow of information upon which wider efforts to protect and preserve human rights depend.