Just five months after taking office, President Sirisena’s government may backtrack on one of its key pre-election promises – to scrap the controversial $1.5 Billion Colombo Port City Project (CPC). The project, which was officially inaugurated in September 2014 by former president Mahinda Rajapaksa and Chinese President Xi Jinping, was set to be the ‘single biggest private sector project in Sri Lanka’s history’. The project has since been suspended over allegations of corruption, serious environmental hazards, and concerns about its human rights impact.

The Port City was designed to make Colombo a global hub of business and tourism, by creating a luxury commercial development with world-class facilities on 223 hectares of reclaimed land. However, the lack of any significant human and environmental impact studies for such a large-scale development has raised serious issues for the new government who, critics say, have remained mostly preoccupied by the perceived geopolitical rewards associated with the project.

The design of the Port City

The CPC, like many development projects in post-war Sri Lanka, is to be financed through Chinese investment. However, in a significant departure from the $4 billion of infrastructural projects awarded to Chinese investors, mostly in the form of loans, between 2009 and 2013, the CPC project provides for 48% of the reclaimed land to be leased and owned by a sole investor – in this instance, the China Communications Construction Company Limited (CCCC) whose majority stakeholder is the Chinese government.

The economic case for the project, and its purported human and environmental costs, have also come under serious scrutiny from across the country. Just two days prior to the formal suspension of the project, a broad umbrella movement of clergy, human rights and environmental activists, fisherman, and Buddhist leaders, gathered under the banner of the ‘People’s Movement against the Port City’ (PMPC) to voice their concerns. In particular, the group cautioned against the potentially enormous environmental and health costs associated with the building process itself.

Second, they highlight the potential damage caused by the process of dredging, which will be used to reclaim the 541 acres of land on which the Port City will sit. As environmentalist Sajeewa Chamikara points out,

“When one attempts to reclaim seas to create artificial islands, there is significant damage to aquatic ecosystems even when proper procedures are followed.”

Neither the Initial Technical Study nor the Environmental Impact Assessment (EIA) conducted by Moratuwa University (under the instruction of the previous regime), seem to have adequately tackled the complexity of these issues – one of their reports even boldly proclaiming that, “there were no major environmental impacts” associated with the reclaiming of land. However, the evidence suggests that the impacts are already being felt by coastal environments and communities. After just a few months of dredging, fish breeding grounds off the coast of Negombo already appear to have been disrupted – a trend which could seriously harm the sustainability of certain species in the region. And elsewhere, recent data has indicated changes in wave and sea patterns believed to be responsible for increases in coastal erosion as far South as Panadura.

The group’s President, Fr. Sarath Iddamalgoda made a statement cautioning against the potentially grave environmental and human impacts of the project, highlighting it’s place in a string of “white elephant” projects inaugurated by the former regime whose benefits continue to line the pockets of government officials at the expense of local communities.

Sadly, this would not be the first time the Government of Sri Lanka has embarked upon an exorbitantly overpriced public project with the Colombo – Katunayake expressway reportedly costing up to $57 million per km according to some estimates – as we mentioned in an earlier blog to pave the same distance with gold would have cost 19 times less. Such white elephants: Hambantota, Matale, the OCH, were the hallmark of the previous regime. 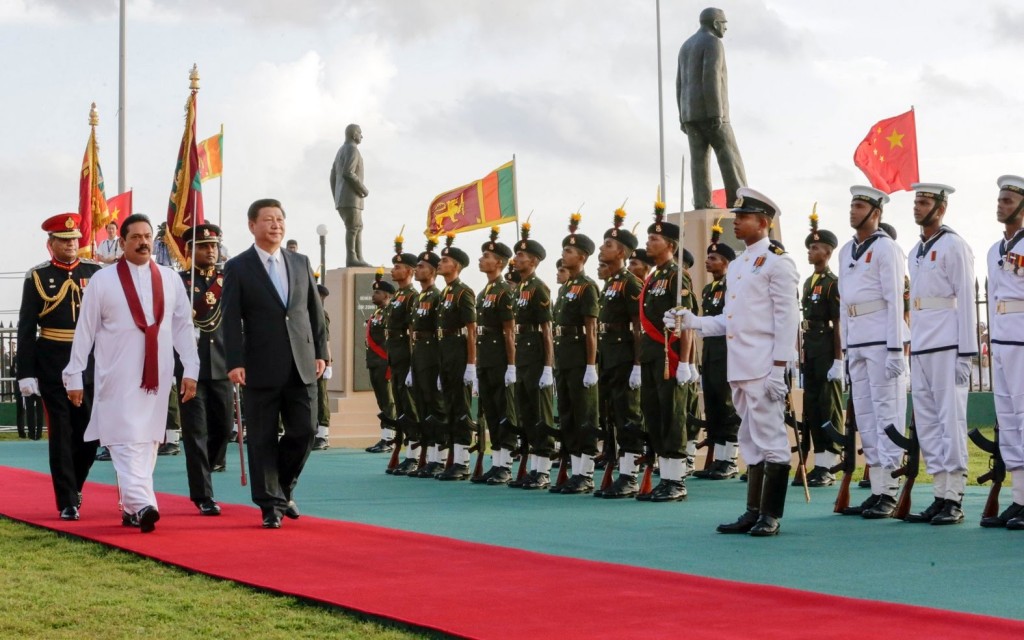 The opening of Colombo Port City, with Mahinda and the army much in evidence, gave some unsubtle clues as to the political value of the project

The long-term environmental costs aside, many of the immediate effects of the CPC redevelopment have already been felt by local fishermen who, as a result of declining fish stocks, have reported major financial losses in “Negombo, Wennappuwa, Uswetakeiyawa, Hendala, Panadura, Wellawatte, Mount Lavinia, and Moratuwa”. In one of the worst hit areas, Thamba Gala – where the Port City will be built – Fishermen have reported losses of $30,000 since work began. With the average fisherman earning just 46,000 rupees (US $340) per month it would take years to recover these losses.

Proponents of the Port City have continued to argue that it has the potential to transform Colombo into a global business hub on the scale of Dubai, Singapore or Hong Kong. Although work has been suspended as of 5th March 2015, pending a full EIA and investigation by a special committee chaired by Prime Minister Ranil Wickramasinghe, 25% of the project has already been completed. With Parliament now suspended the status of this investigation is unclear.

Supporters of the Port City have argued that the completed works will make it very difficult for the Sri Lankan Government to back out of the billion dollar commercial deal. The threat of potential legal action has also been mounting against the government as the CCCC has reported daily losses of $380,000 for every day the project is suspended – this could leave Sri Lanka with a hefty compensation bill in excess of $41 million.

The CCCC have argued that once completed the project would attract $13 billion in Foreign Direct Investment and lead to greater economic prosperity for the entire Island. Yet these claims have been marred by allegations of corruption and fraud. In 2011 the World Bank debarred the CCCC from any involvement in its development projects.

The Colombo Port City represents a perfect opportunity for a new Sri Lanka to tackle head-on the long-standing issues of human rights violations, corruption and wasteful expenditure. President Sirisena’s government was elected to tackle the string of serious violations against democracy, free speech and human rights that the previous administration had left behind.

Whilst the negative implications are clear, the Port City does also present Sri Lanka with an opportunity for some much needed socio-economic development. The question is whether the potential benefits of the Port City and consequences of not completing the project, outweigh the negative effects on the country.

Those who stand to lose the most from the Port City are not the billion dollar Chinese investors but some of the most vulnerable communities; fishermen, rural villagers and local business owners. The people of Sri Lanka deserve to have their natural environment, livelihoods and rights protected by their government.

Only one thing is clear, in order for Sri Lanka to truly learn from its past mistakes the discussion about the Port City must be refocused to centre on the protection of its own people over and above the interests of foreign investors and greedy politicians.