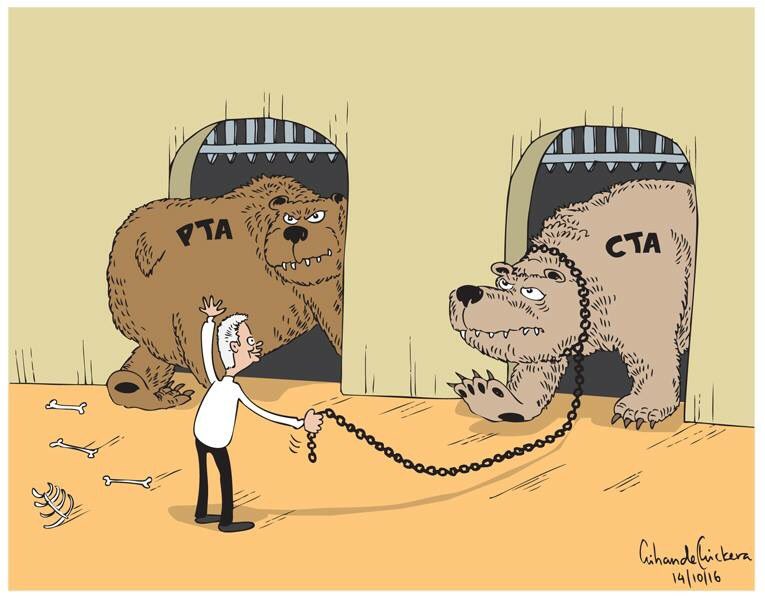 Over the weekend, a draft framework copy of the ‘Counter Terrorism Act’ (CTA) – the legislation intended to replace the draconian ‘Prevention of Terrorism Act’ (PTA) – was leaked to the press. The contents of the text, available here, are deeply disturbing.

As it currently stands, the PTA enables arbitrary arrest and long periods of detention with minimal legal oversight. It has been widely condemned as one of the main causes of serious human rights violations in Sri Lanka. Were the proposed CTA draft enacted today, it would not only fail to resolve these issues, but would significantly widen the scope of the repressive powers available to the Sri Lankan state. They would undoubtedly be, in the words of one commentator, “a cure far worse than the disease”.

As the Sri Lankan Prime Minister holds meetings in Brussels today to help renegotiate a return to ‘GSP+’ – the preferential trade agreement suspended in 2010 due to human rights concerns – EU officials must now send a clear public message that no headway in the talks will be possible until the PTA is meaningfully repealed.

In 2010 the EU insisted that a return of GSP+ status would be dependent on amending the PTA to make it compatible with the International Covenant on Civil and Political Rights (ICCPR). While a detailed legal analysis of the draft Act has not yet been produced, it is almost certain that it would not be compatible. A re-introduction of GSP+ under the proposed arrangements would therefore fly in the face of the EU’s own guidelines. It would also be a major betrayal of it support for UN Human Rights Council Resolution 30/1, which commits the government of Sri Lanka to replacing the PTA with “anti-terrorism legislation in accordance with contemporary international best practices.”

As the Sri Lanka Campaign argued earlier in 2016, any concessions by the EU must be based on actions rather than words. That means no decision should be made until the final legislation is passed and a full and public review of the broader criteria for return of GSP+ undertaken. Now, as then, it is vitally important that the EU use all the leverage at its disposal in the meantime to push the government to pass an Act that is consistent with international human rights standards and which does not threaten Sri Lanka’s chances for a lasting peace.

What is the PTA and why is its repeal so important?

Originally enacted in 1979 as a temporary measure to deal with a deteriorating security situation, the PTA has (in conjunction with a number of Emergency Regulations) since been used as a tool to intimidate and control citizens from all communities and backgrounds – but in particular, former combatants, journalists, political opponents, human rights defenders and members of the minority Tamil community. The broad wording of the Act means that almost anyone can be arbitrarily arrested, in contravention of both the fundamental rights granted by the constitution and the various international human rights treaties to which Sri Lanka is a signatory.

Owing to its restrictions on access to legal counsel, as well as lack of safeguards on the admissibility of confessions, the PTA has also played a key role in facilitating and incentivising systemic torture by the Sri Lankan security forces over several decades. And with its lengthy detention periods and restrictions on requests to relief from the courts, it has resulted in hundreds of detainees languishing behind bars for many years, without conviction or charge, on the basis of little or no evidence, with minimal judicial oversight. As a 2015 report by human rights group WATCHDOG highlights, five persons have spent 18-19 years in jail waiting for their guilt or innocence to be established. Several have spent over ten years in remand without charges being brought against them. 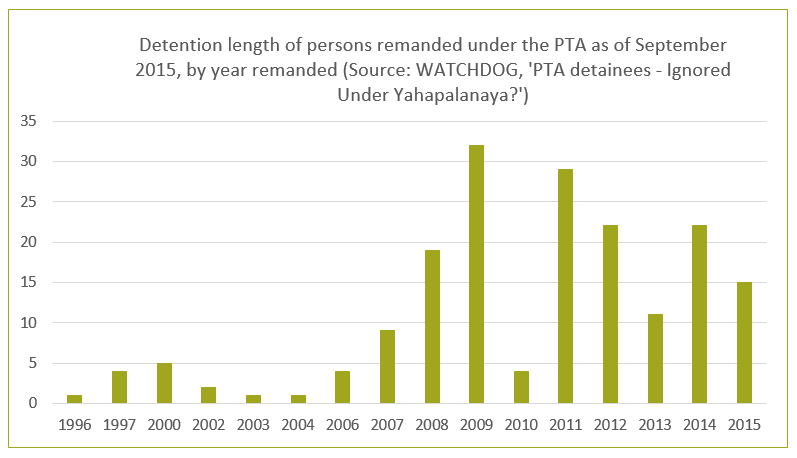 What is in the Draft ‘Counter Terrorism Act’ (CTA)?

While we await a full legal analysis of the text, early examination of the draft Counter Terrorism Act suggests a massive and alarming expansion of grounds for arrest, with “terrorism” now incorporating the act of “illegally or unlawfully compelling the Sri Lankan Government (or that of any other sovereign nation) to reverse, vary or change a policy decision”. Further ambiguity around prohibitions on “acts of violent extremism towards achieving ideological domination” as well as “words either spoken or intended to be read [that may cause] harm to the unity, territorial integrity or sovereignty of Sri Lanka” indicate a chilling new step towards the policing of thought as well as protest and advocacy.

As for addressing those procedural elements of the PTA which facilitate torture and abuse in custody, the new bill upholds the restriction on suspects’ access to counsel for 48 hours from the time of arrest and maintains the admissibility of confessions obtained by officers. Disproportionate punishments, including the death penalty, do little to assuage the perception that the Act, in its current form, would simply be used by the Sri Lankan state as an instrument for continued repression.

“The whole draft thus allows the government in power to crush any dissent or opposition that may challenge it” (DecentLanka2015 Statement, 17th October 2016)

What needs to happen now?

It goes without saying that the government of Sri Lanka should immediately withdraw this draft and conduct a complete re-write before submitting it to further public and parliamentary scrutiny. Were this not to happen, then it would likely find itself in breach of its commitments both to the international community and its own people.

With regard to the EU, a failure to substantially alter the draft legislation would make the already contentious return to GSP+ status entirely unjustifiable. The EU therefore has a significant amount of leverage over the draft legislation and it is imperative that they use this to ensure that the new Act does not continue to facilitate serious human rights violations.

With regard to the United Nations, Sri Lanka’s commitment under Human Rights Council Resolution 30/1 to review and repeal the PTA means that a failure to meaningfully reform counter-terrorism legislation would merit robust action by the Human Rights Council in the form of further monitoring and oversight.

Most importantly however, the Sri Lankan government promised its own people that the days of authoritarianism were over. This draft Act gives the lie to that promise – a lie that threatens to destroy Sri Lanka’s fragile peacebuilding process. Unless it is urgently re-thought, it could have calamitous consequences for the country’s future.

“…effective counter-terrorism measures and the protection of human rights are not conflicting goals, but complementary and mutually reinforcing.” – 2006 General Assembly Adoption of the Global Counter-Terrorism Strategy)

What can I do?