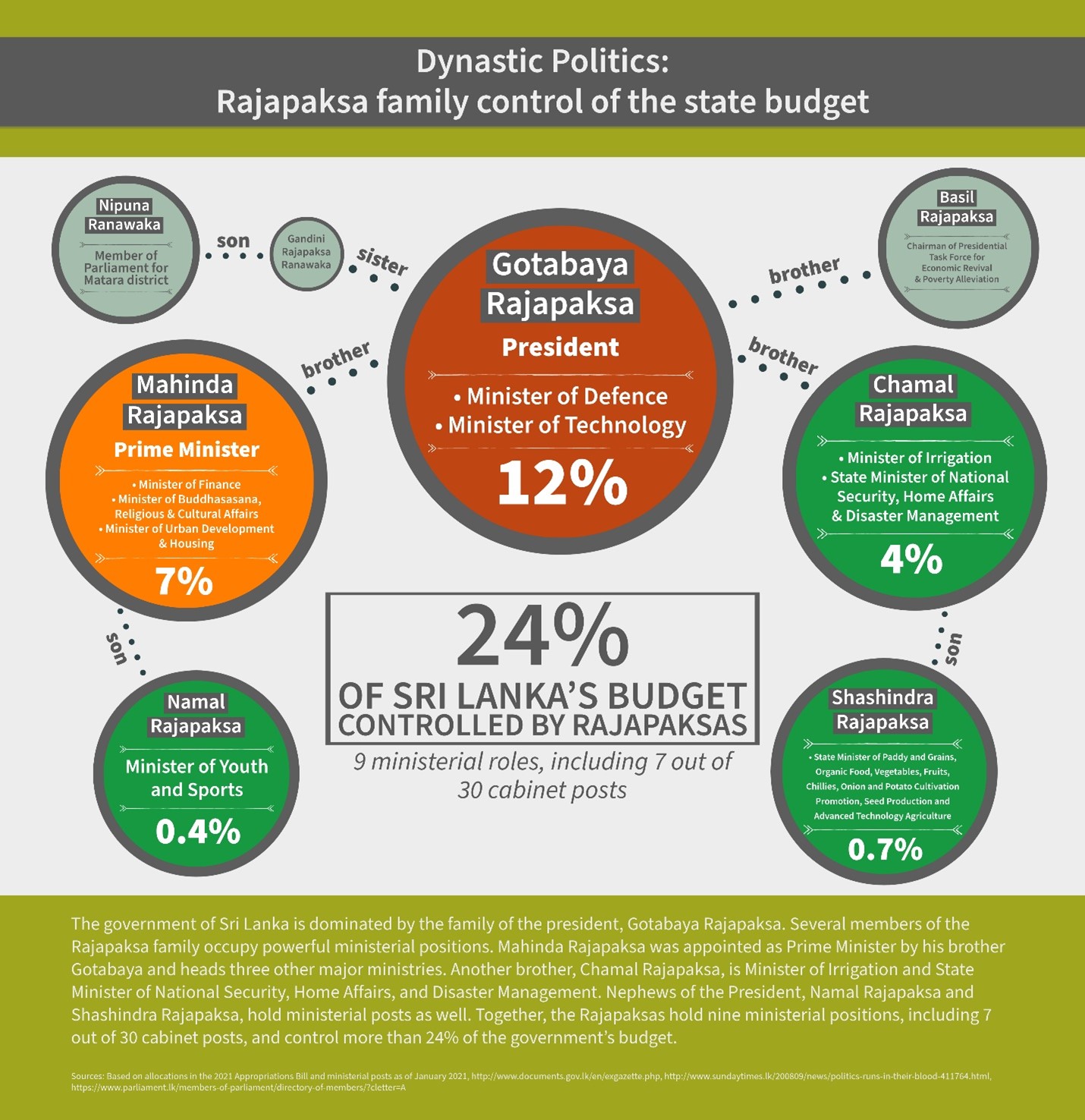 The government of Sri Lanka is dominated by the family of the president, Gotabaya Rajapaksa. By occupying 9 ministerial roles, including 7 out of 30 positions on the cabinet, the Rajapaksa family controls nearly a quarter of Sri Lanka’s state budget.

In the midst of a worsening COVID-19 pandemic and a constitutional crisis over an extended suspension of parliament, Sri Lanka’s latest parliamentary elections took place in August 2020. President Gotabaya Rajapaksa dissolved parliament on 2 March, anticipating that elections could be held in mid-April, but the pandemic delayed elections past June. Sri Lanka’s constitution mandates that parliament can only be dissolved for 3 months, but this deadline was passed on 2 June when the President refused to recall parliament even while responding to a public health crisis. Regardless, the Rajapaksas’ Sri Lanka Podujana Peramuna (SLPP) party achieved a landslide victory in the parliamentary elections, attaining their electoral goal of a 2/3 majority in parliament. This super-majority allows them to pass constitutional amendments without working to build consensus in parliament.

Immediately after the SLPP’s decisive victory, the President appointed several members of his family to major ministerial positions. Mahinda Rajapaksa, older brother to Gotabaya and former President, heads three large ministries in addition to his role as Prime Minister: Minister of Finance, Minister of Buddhasasana, Religious, and Cultural Affairs, and Minister of Urban Development and Housing. Another brother, Chamal Rajapaksa, is Minister of Irrigation and State Minister of National Security, Home Affairs, and Disaster Management. Nephews of the President, Namal Rajapaksa and Shashindra Rajapaksa, also hold ministerial positions – Namal is the current Minister of Youth and Sports while Shashindra heads a State Ministry focusing on agriculture. The Ministry of Defence, which has the largest budget allocation, and a newly established Ministry of Technology, are overseen by President Gotabaya Rajapaksa himself.

The nepotism seen in this administration is not new. Numerous members of the Rajapaksa family held key positions under former President Mahinda Rajapaksa’s administration (2005-2015), particularly in legislature, civil service, diplomatic corps, government-run industries, and private industries. Then-President Mahinda Rajapaksa had three ministries in his control (Ministry of Finance and Planning, Ministry of Defence, Ministry of Ports and Highways) and his younger brother Basil Rajapaksa was the Cabinet Minister of Economic Development.

Both the past Mahinda Rajapaksa presidency and the current Gotabaya Rajapaksa presidency have sought to centralise power within a single political family. The current President, however, is also amassing and consolidating his own personal power by means of the recently passed 20th Amendment to Sri Lanka’s Constitution, filling government positions with allies and state militarization.

The 20th Amendment, in essence, advances the democratic backsliding of Sri Lanka by granting the President unfettered powers. The President can summarily appoint or dismiss ministers, including the prime minister, and can modify the number of ministries, the number of ministers, and the functions delegated to each minister whenever he wants. The 20th Amendment also removed the prohibition on the President himself holding ministerial posts. Chiefly, this weakens power-sharing between the President, and the Prime Minister and Cabinet. The Prime Minister and Cabinet are practically relegated to “mere servants of the President,” given the ease with which they can be dismissed. It also allows the President to exercise nepotism and patronage in ministerial appointments by rewarding those most loyal to him. Further, the President now has the power to dissolve parliament only two and a half years into the new parliament compared with the former four-and-a-half-year minimum period mandated by the 19th Amendment. This increased presidential power to dissolve parliament incentivizes parliament to yield to Presidential will under the threat of new elections.

On top of this, the independence of the judiciary and civilian institutions has been removed, as the President has the sole authority to appoint senior members of the judiciary and police, and members of independent commissions and state offices. On the whole, the 20th Amendment jeopardizes Sri Lanka’s constitutional democracy by undermining nearly every constitutional check on executive presidency. It is being used by the President to secure powerful ministerial posts for himself and his family members, and to fill state offices and ministries with individuals who will submit to his personal power.

This article was researched and written by volunteer Risa Thevakumaran and edited by the Sri Lanka Campaign.

Sources: Figures based on allocations in the 2021 Appropriations Bill and Ministerial posts as of January 2021, http://www.documents.gov.lk/en/exgaxette.php, http://www.sundaytimes.lk/200809/news/politics-runs-in-their-blood-411764.html, https://www.parliament.lk/members-of-parliament/directory-of-members/?cletter=A

Read our latest report – Reversing Progress: Threats to Human Rights and Reinforced Impunity in Sri Lanka. The report is the last of our Keep the Promise series, assessing whether the government of Sri Lanka has kept its promises to survivors and the international community to address the legacy of the island’s brutal civil war. We found that over the last year, the government has reversed progress on 15 of the 25 promises and halted progress on a further 7 commitments. Only three have not been reversed or halted.