Freedom of religion in Sri Lanka: four things we learned from a recent report by a UN expert 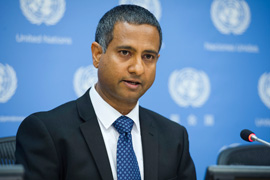 The past few weeks have seen many inches of column space taken up by Sri Lanka’s decision to withdraw from UN Human Rights Council resolution 30/1, a move which saw the government tear up its earlier promise to deal with legacy of the country’s bloody civil war through a credible justice and reconciliation process. Unfortunately, that meant less attention being given to the findings of an important report – published just a week earlier at the Council by one of its leading human rights experts – highlighting the ongoing violence and repression against religious minorities that have plagued Sri Lanka since the end of the war.

That report, published by the UN Special Rapporteur on Freedom of Religion or Belief following his visit to Sri Lanka in August 2019, lays bare a number of troubling dynamics on the island. They are dynamics which, left unchecked, could see Sri Lanka “locked in a vicious cycle of ethno-religious violence,” says the Special Rapporteur.

We think it’s a really important read, which makes the vital connection between the failure to deal with past human rights violations and ongoing abuses in Sri Lanka today. So, here are four key things we learned from it that we wanted to share with you:

1. The Sri Lankan police and security forces have taken part in violence against Muslims

Sri Lanka’s post-war period has seen multiple waves of mob violence against Sri Lanka’s Muslim community, who make up just over 9% of the population. These incidents include coordinated attacks by groups of Buddhist hardliners against communities in Aluthgama in 2014, in Gintota in 2017, and in Ampara and Digana in 2018 – attacks which have resulted in massive property damage, grave physical injury, and even death. The Special Rapporteur affirms evidence that not only have police failed to act to prevent such violence, they have also actively participated in it.

For example, after the April 2019 bomb attacks, in which more than 250 people were killed by an Islamic State-inspired terrorist group, mob violence against Muslims broke out in several parts of the country, leading to hundreds places of worship, shops, and houses being destroyed. But far from intervening to protect Muslim communities, the Special Rapporteur’s report says video footage and eyewitness accounts show Sri Lankan security forces “colluding with [the] mobs.”

Violence against the Muslim community in Sri Lanka is not new and nor is the state’s complicity in it. The Special Rapporteur highlights how many victims of such attacks had complained of violence being “indulged” by the authorities over many years, while expressing dismay “that large mobs could openly and for several hours rampage through minority community neighbourhoods without hindrance or reaction from law enforcement.”

2. Perpetrators of violence against religious minorities are not being brought to justice

Also shocking is the UN Special Rapporteur’s finding that although a few individuals have been arrested, not a single person has been successfully prosecuted in relation to the violent incidents described above. This, he says, is not for want of proof. He makes clear that “sufficient evidence” has been available in the aftermath of each of these cases, including video recordings in which perpetrators are clearly identifiable.

Literally hundreds of other hate-related incidents by extremist Buddhist groups such as the Bodu Bala Sena (BBS) have gone unpunished, despite the “extensive grounds for criminal prosecution” in such cases. These include not just attacks on Muslims, but also, notably, against Sri Lankan Christian Evangelicals and Jehovah’s Witnesses.

The Special Rapporteur blames this lack of action upon “an absence of political will, weak implementation of rule of law, low awareness of the available legal provisions, and possibly fears of public backlash [among officials]”. This, he says, has created an environment in which victims “have lost their faith in the State and law enforcement agencies” and where minority communities now feel “extremely vulnerable.”

The ICCPR Act[1] – enacted by the government of Sri Lanka in 2007 to meet its obligations under international law – is a piece of legislation designed to protect freedom of expression, while curbing hate speech and incitement to violence. However, according to the Special Rapporteur’s report, no one has been prosecuted for hate speech under the Act, despite a number of serious incidents that are believed to have prompted violence against Muslims and other religious minorities. This includes incidents involving the leader of the hard-line BBS, Gnanasara Thero, who gave an inflammatory speech before the Aluthgama riots in 2014.

Even more alarming is the Special Rapporteur’s finding that the ICCPR Act “has ironically become a repressive tool” – one that is today being used by state officials to throttle, rather than defend, freedom of expression. Members of minority communities who met the Special Rapporteur spoke of bias in the way police addressed complaints about hate speech, complaining that police often failed to investigate when they raised concerns about hate speech from the majority community, but acted swiftly and sometimes disproportionately when concerns were raised by members of the Buddhist community. The ongoing case against author Shakthika Sathkumara, who was arrested in April 2019 for writing a fictional short story that is alleged to have “insulted Buddhism”, is but one example of this worrying new trend.

4. The ‘foremost place’ of Buddhism in Sri Lanka’s constitution is a key driver of discrimination and impunity

Article 9 of Sri Lanka’s constitution guarantees the “foremost place” to Buddhism while requiring the state to protect and foster its teachings; a provision which the Special Rapporteur says effectively elevates Buddhism to the “official religion of the State.” Its overall effect, the Special Rapporteur explains, is a “lack of equality amongst religious communities” – on the one hand, undermining protections for minorities, while on the other, engendering a sense of privilege among the majority Buddhist community.

The Special Rapporteur notes the various harmful ways in which this dynamic manifests itself, from the government’s tacit support for aggressive attempts to construct Buddhist shrines in largely non-Buddhist (and usually majority Tamil) areas, to the deep reluctance of state officials to take action in relation to criminal wrong-doing by Buddhist monks. In short, the impact of Article 9 is not just that it promotes favourable and exceptional treatment of Buddhists by the government, but also that it sometimes places them above the law.

The government’s response: cause for concern

The government of Sri Lanka reacted angrily and defensively to the report, dismissing its findings as “inaccurate” while rejecting allegations that its forces had either colluded in violence against religious minorities or failed to prevent it. The tenor of the response was of little surprise, given the strong links that the Rajapaksas – and President Gotabaya in particular – have sought to cultivate with extreme Buddhist nationalist groups in recent years. Tellingly, the BBS not only campaigned on behalf of Gota in November 2019, but also claimed victory for Buddhist nationalism when he eventually won the Presidency.

As Sri Lanka’s new government seeks to reinforce its mandate at upcoming parliamentary elections – most likely with another narrow and nationalistic pitch aimed at its majority Sinhala Buddhist base – there is little sign of any willingness to acknowledge, let alone address, the major challenges identified in the Special Rapporteur’s report. For those living in Sri Lanka whose faith and beliefs lie outside the mainstream, as well as all those committed to preserving Sri Lanka’s long-standing traditions of religious diversity, tolerance, and cooperation, that is very worrying indeed.

[1] The International Covenant on Civil and Political Rights Act