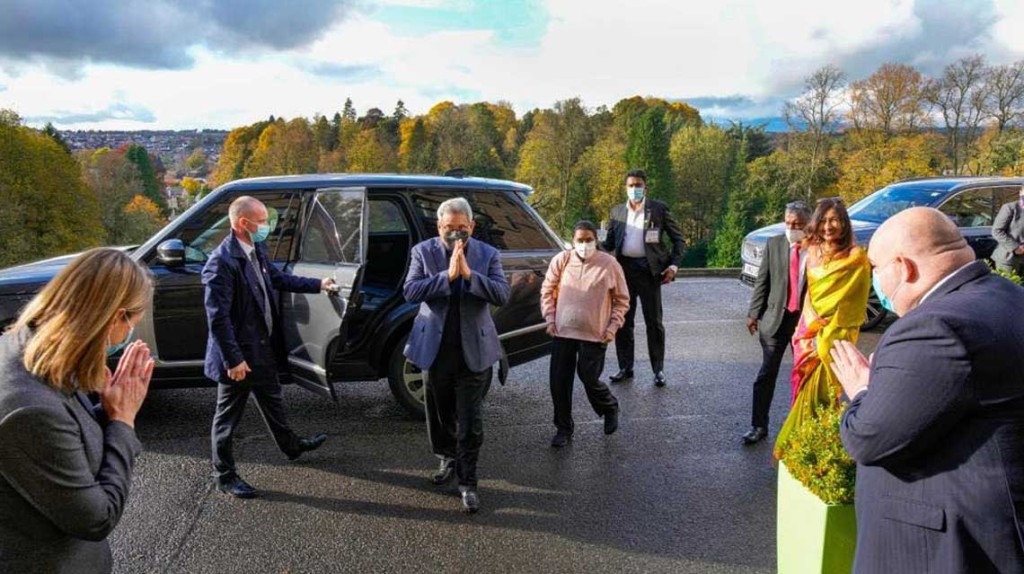 Sri Lankan President Gotabaya Rajapaksa has been in Scotland this week to attend the UN’s COP26 Climate Change Conference. Gotabaya Rajapaksa, who served as Defence Secretary between 2005-2015, is accused of command responsibility for mass atrocity crimes that killed tens of thousands of civilians during the final stages of the war in 2009. His alleged human rights abuses continued after the war, with a campaign of repression during which many Tamils and critics were assassinated, disappeared, and tortured.

Since his election as President in 2019, Gotabaya Rajapaksa has presided over an increasingly authoritarian, militarised, and majoritarian regime that has eroded democratic governance and the rule of law in Sri Lanka. Human rights activists, lawyers, journalists, protesters, and others critical of the government have been targeted by intimidation and harassment, and in some cases, arbitrary detention.

Despite these serious concerns, however, heads of state and other important dignitaries at COP26 have been lining up to greet Rajapaksa, such as Boris Johnson, who shared jokes and an elbow bump with the President as the conference began. Such friendly interactions can serve to legitimise a President who continues to flaunt his impunity on the international stage.

Read our recent blog on how politicians and diplomats can manage engagement with a government filled with perpetrators.

President Rajapaksa met with Secretary-General of the Commonwealth Patricia Scotland to discuss climate change and other issues on October 31, with the Commonwealth highlighting Sri Lanka’s ‘skilful’ leadership of the Mangrove Action Group. This comment serves to uphold an image of Rajapaksa as an environmentalist, and the President himself emphasised Sri Lanka’s role in conservation as he laid out his nation’s ‘ambitious agenda’ for tackling climate change. However, it is disappointing that the Secretary-General apparently did not take the opportunity to raise concerns about democratic governance and the rule of law in Sri Lanka, which have been undermined by the President and his government.

It was an honour to meet with the President of Sri Lanka, @GotabayaR.

During our meeting, we discussed #SriLanka’s response to COVID-19, health care, green and blue economies and where the @commonwealthsec can provide assistance.#CommonwealthForClimate | #Commonwealth | #COP26 pic.twitter.com/Q0WP6COXfv

Moreover, Sri Lanka’s record on forest conservation and environmental protection is far worse than the Commonwealth’s statement implies, particularly in the north and east of the island. Locals in Mannar have accused the Sri Lankan government of illegal deforestation and appropriation of their land and there have been widespread reports of dangerous sand mining damaging local ecosystems. In October 2020, UNESCO raised concerns over the construction of a concrete road through the Sinharaja Forest Reserve in southern Sri Lanka in August 2020, which climate activists claim was built illegally to boost tourism.

During the convention in Glasgow, Gotabaya Rajapaksa has also sought to emphasise his government’s commitment to organic agriculture and opposition to chemical fertilisers. However, after months of protests from farmers across Sri Lanka, the Sri Lankan government was recently forced to back down from its abrupt decision to ban all imports on chemical fertiliser in May, a policy which had stoked fears of low food yields and declining tea quality. Rather than address these failings or serious human rights concerns, the Commonwealth has instead decided to portray Sri Lanka as a leading light in global conservation.

Whilst the President has been meeting with dignitaries, scores of British Tamils have travelled to Glasgow in protest. Ahead of Gotabaya Rajapaksa’s arrival in Glasgow on October 30, a mock ‘Wanted’ poster was projected on buildings around Scotland, including the Scottish Parliament building in Edinburgh. Small groups of protesters gathered in Strasbourg on October 29 to condemn the President’s visit, and Scottish Tamils placed adverts in two major Scottish newspapers, the Herald and the National, highlighting the allegations against Rajapaksa and Sri Lanka’s armed forces.

On November 1, protesters gathered outside the hotel in Dunblane where the President was staying, before moving to Glasgow itself. There, groups of Tamil protestors gathered south of the river Clyde opposite the SEC centre where the conference is being held. They were joined by Zimbabwe activists, who were protesting President Emmerson Mnangagwa.

Activists appear to be waving Tamil flags on the south side of the river Clyde, directly across from the #COP26 conference venue pic.twitter.com/yMxdTAHdoQ

Yet there has been little coverage of these protests in the Sri Lankan press. Instead, press coverage has largely focused on President Rajapaksa’s meetings with foreign dignitaries like Prince Charles and Prime Minister Sher Bahadur Deuba of Nepal, and Foreign Minister G.L. Peiris’s visit to the University of Cambridge. These highlight the acceptance of the President and his government by foreign representatives, ignoring the serious controversy and protest surrounding the President’s visit. The only mentions of the protests portray the protesters as LTTE sympathisers. The protesters themselves were well aware of these dynamics, with one quoted in The Times: “If we had been protesting like this over there [in Sri Lanka] we would either be dead right now or ‘disappeared’ into police custody.” The lack of coverage of the protests in the Sri Lankan press only assists the President in whitewashing his reputation, at home and abroad.