[Update 27/2/17: a dedicated webpage with regular updates about Lena’s case has been set up here. You can also follow developments via @pusatkomas on Twitter]

On Tuesday 21st February, Lena Hendry, a human rights defender in Malaysia, was convicted for her part in a screening of the film No Fire Zone – an award-winning Channel 4 documentary which played a crucial role in exposing human rights abuses, including war crimes and crimes against humanity, committed at the end of Sri Lanka’s civil war. She is due to be sentenced on 22nd March, at which point she faces a maximum sentence of three years in jail and/or a maximum fine of up to three years in prison. 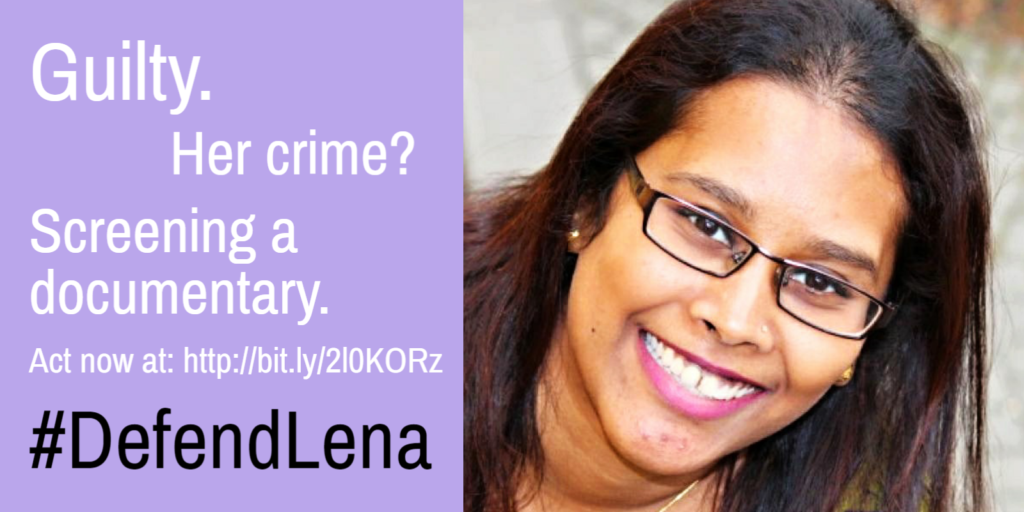 Her purported crime falls under Malaysia’s draconian Film Censorship Act which prohibits “circulation, distribution, display, production, sale, [or] hire” of any film without the permission of the Board of Censors. It effectively makes any film, or even publicity about any film, illegal if it does not have prior approval from the censorship authorities.

Lena’s conviction, and the penalty she faces, would be a disturbing blow to freedom of expression in Malaysia. But it would also represent a triumph for the sustained effort, led by elements within the former and current governments of Sri Lanka, to repress and discredit the film and its findings.

As Human Rights Watch report, “the prosecution in [Lena’s] case appears to have been strongly motivated by the Malaysian government’s desire to appease Sri Lankan embassy officials who had publicly demanded that the film not be shown and visited the venue on the day of the film’s showing to urge the venue’s managers to cancel the event”. It was likely as a direct result of their pressure, that the screening was subsequently disrupted by 30 Malaysian officials, leading to the arrest of Lena and her being charged in 2013.

Though the government of Sri Lanka which tried to stop the screening has been ousted from power, suppression of the film has persisted. As recently as yesterday, Sri Lanka’s ambassador to Geneva continued to insinuate that the film’s footage had been doctored. Last month, the Foreign Minister implied that, although he had viewed the film himself, his fellow Sri Lankans were not yet ready to do so. The punishment of Lena, with the aiding and abetting of the government of Sri Lanka, will no doubt serve to reinforce the perception that frank and open discussion of the uncomfortable truths laid out in the film will not be tolerated by the authorities. To date, no public screening of the film has taken place in Sri Lanka.

Recent history – and in particular the findings of a major UN report which found evidence of ‘system crimes’ during Sri Lanka’s civil war – has vindicated the film. Yet while the perpetrators of the crimes it exposed walk free, Lena faces jail for showing it. Her conviction is a basic denial of free speech which should immediately be overturned.

Please stand with Lena and let her and the Malaysian authorities know the world is watching by:

Further information about Lena’s case is available on the No Fire Zone website, here.

C/O the Sri Lanka Campaign for Peace and Justice

To [full addresses below]:

On Tuesday 21st February 2017, Lena Hendry, a human rights defender in Malaysia, was convicted of showing the film No Fire Zone: The Killing Fields of Sri Lanka – an award-winning documentary film about human rights abuses at the end of Sri Lanka’s civil war – without the approval of Malaysia’s censorship authorities. She is due to be sentenced on the 22nd March this year.

I wish to protest in the strongest terms about this disgraceful conviction which flies in the face of every principle of free speech and democratic debate.

Lena faces a maximum sentence of three years in jail and/or a maximum fine of 30,000 Malaysian Ringgit (£5400/$6700) under Malaysia’s Film Censorship Act which criminalizes the possession, distribution, or showing of films which have not been approved by the country’s censorship board. It effectively makes any film – or even publicity about any film – illegal if it does not have prior approval from the censorship authorities.

The reality is that the law is being used for political censorship, and that is what appears to lie behind the conviction of Lena.

On the 3rd July 2013 the Malaysian human rights organization Pusat KOMAS showed No Fire Zone: The Killing Fields of Sri Lanka to an invited audience of 150 people in Kuala Lumpur, at a screening attended by the film’s director, Callum Macrae. The group went ahead with the screening despite pressure from the Sri Lankan government whose forces were accused in the film of responsibility for war crimes. As the screening got under way it was raided by 30 officials from the Malaysian Home Ministry, the Police and Immigration Officials. Three organizers were arrested and Lena was subsequently charged in September 2013. A three year-long legal battle ensued culminating in this guilty verdict.

The use of this draconian law to attack and prevent freedom of speech is disturbing and unacceptable, and is in danger of bringing Malaysia into international disrepute.

The Emmy and Bafta nominated film which Lena is charged with showing is now widely and internationally acknowledged to have played a key role in exposing the terrible atrocities committed at the end of the war in Sri Lanka. It also helped convince delegates to the UN Human Rights Council to launch a major inquiry into the events which saw tens of thousands of innocent Tamil civilians slaughtered in the space of a few weeks – most killed by government shelling.

The Sri Lankan government which ordered that shelling – and which tried to stop this screening – has now been replaced by popular vote of the Sri Lankan people. But many of its leading members and military officials stand accused of direct command responsibility for war crimes and crimes against humanity.

History has vindicated the film. Yet while the perpetrators of the crimes it exposed walk free, Lena faces jail for showing it. Her conviction is a denial of free speech which brings shame on Malaysia and should immediately be overturned.

Friends of Lena Hendry can be contacted through:  [email protected]