To commemorate Press Freedom Day in May 2009, President Obama expressed his support for the “brave men and women of the press who labor to expose truth”. Noting the oppression and abuse they face, he went on to say “Emblematic examples of this distressing reality are figures like J.S. Tissainayagam in Sri Lanka…”

Well now the Government of Sri Lanka has shown just how it responds to soft pressure by the US President by orchestrating a 20 years sentence for hard labour for this courageous journalist.

Tissainayagam’s crime was to challenge the Government. Reminiscent of the gulag approach of the former Soviet Union? But why should we be surprised? When the urbane former Sri Lankan Ambassador to the UN spoke openly about Sri Lanka being influence by the Chechen model, few called him to task. To remind those who may have forgotten this is what the Times war correspondent said about the Chechen war: “The war in Chechnya – it was like nothing I had ever seen before. In terms of the scale of violence, fear and horror, it left anything in my experience so far behind as to make it almost insignificant. You can grade conflicts according to intensity if you desire: low, medium and high. Chechnya blew the bell off the end of the gauge, and revealed an extreme of war to me that I had no conception of. Afterwards my understanding of conflict was never quite the same again. It was indeed a glimpse from the edge of hell.” And now the “model” is being exported even further!

Put simply, the reason Sri Lanka feels able to ignore the USA because it isn’t serious about the pressure it is applying. Back in May Secretary of State Hillary Clinton said: “I think that the Sri Lankan Government knows that the entire world is very disappointed that in its efforts to end what it sees as 25 years of conflict, it is causing such untold suffering.”

Three months later, some 280,000 Tamil civilians are languishing in internment camps from which the media and most humanitarian relief organizations are excluded, but where highly insanitary conditions are know to prevail, especially since torrential flooding in mid-August. But Secretary Clinton is silent, while Robert Blake, Assistant Secretary, Bureau of South and Central Asian Affairs, says only that the US has “had continuing dialogue with the Government of Sri Lanka about the conditions in the camp and the need to release all of the IDPs who are there now and to allow them to be resettled as quickly as possible back to their homes”, and is “surprised” by President Rajapaksa’s reluctance to pursue political reconciliation until after presidential elections are held, probably in January.” 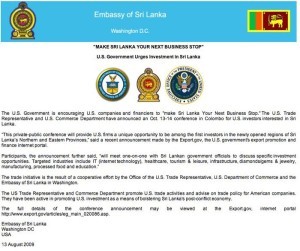 Much worse, the U.S. Trade Representative and Commerce Department have announced an Oct. 13-14 conference in Colombo for U.S. investors interested in Sri Lanka, urging U.S. companies and financiers to “Make Sri Lanka Your Next Business Stop.” This event will “provide U.S. firms a unique opportunity to be among the first investors in the newly opened regions of Sri Lanka’s Northern and Eastern Provinces.”

So now we have a new phrase which stresses the upside of ethnic cleansing!
And we really wonder why this softly softly approach isn’t working?