On this day nine years ago, a political cartoonist went to work in Colombo.

Prageeth Eknaligoda was an outspoken critic of the government of Sri Lanka. He worked tirelessly to expose the gross human rights violations committed against Tamil civilians during the civil war. It was his investigations into the government’s alleged use of chemical weapons against its own people that many have suggested was the reason for Prageeth’s abduction on 24th January 2010, as he travelled on the evening commute.

He is one of many media workers in Sri Lanka – including many lesser known Tamil journalists – to have been disappeared or killed during the armed conflict and its aftermath. 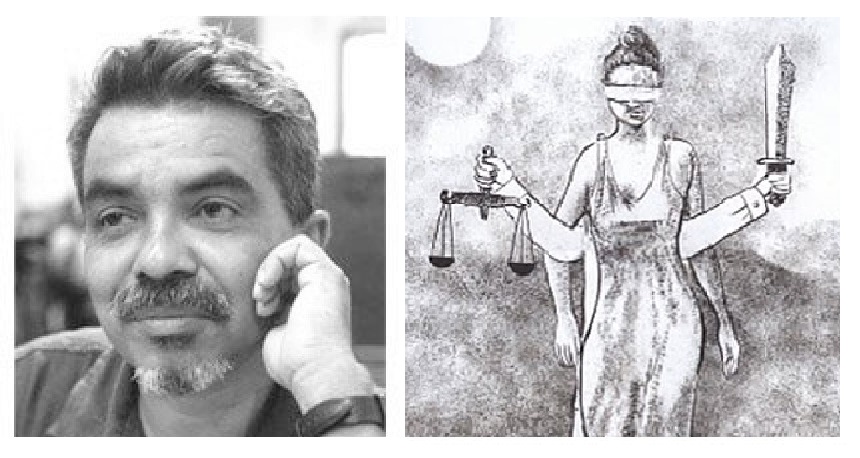 For nearly a decade, Prageeth’s wife, Sandhya, has fought unrelentingly to uncover the truth about what happened to her husband, and to bring to book those responsible for his disappearance. She has made countless court appearances, battled misinformation campaigns, and faced down appalling threats and intimidation from nationalist thugs. Yet despite her efforts, and the arrest of a number of suspects, Sri Lanka’s grindingly slow court system is yet to deliver justice.

To mark this day, we wanted to share with you a couple of powerful short video clips featuring Sandhya hosted on the citizen journalism website, Groundviews. We’d like to invite our supporters to demonstrate their solidarity with Sandhya – who is today speaking in Colombo – by sharing a link to these videos on social media along with a message of support, or one of the many striking cartoons by or in tribute to Prageeth. (Alternatively you can send us a note by email, and we will do our very best to pass it on).

In order to amplify your message, we suggest using the hashtag #WhereIsPrageeth. And you can ensure it is heard by those in power by ‘tagging’ in your posts Sri Lanka’s leaders, President Maithripala Sirisena and Prime Minister Ranil Wickremesinghe.

Those involved in Prageeth’s disappearance want the world to forget what happened nine years ago. Sandhya’s words are a reminder of why we must not let that happen:

“Justice is served when the perpetrators are punished. All those who were killed, disappeared, abducted, assaulted, whose limbs were broken during Mahinda Rajapaksa’s regime have not received justice. This Government, that came to power on these issues, has a responsibility to see that justice is served.”