Help Jeyakumary and others detained without evidence

Ruki Fernando and Fr Praveen Mahesan have been released but Jeyakumary Balendran and a number of others remain in detention. The situation in Sri Lanka continues to be incredibly troubling with the Government of Sri Lanka continuing a general crackdown on all forms of dissent. The latest news is:

We must continue our campaign  for those still in detention. The Government of Sri Lanka has taken the view that, while they could not stand up to the amount of pressure the international community brought to bear for Ruki and Fr Praveen, they can pick on those less protected with impunity. We must prove them wrong, and show we care just as much about all those unlawfully detained.

Jeyakumary is a prominent activist in the movement for the relatives of the disappeared. She led the demonstrations when David Cameron went to Jaffna, and her daughter (on the right) garlanded UN High Commissioner Navi Pillay when she visited Sri Lanka. As a Hindu, a Tamil, and a woman, she belongs to a much less well protected minority than Ruki and Fr Praveen, but she needs our support just as badly. 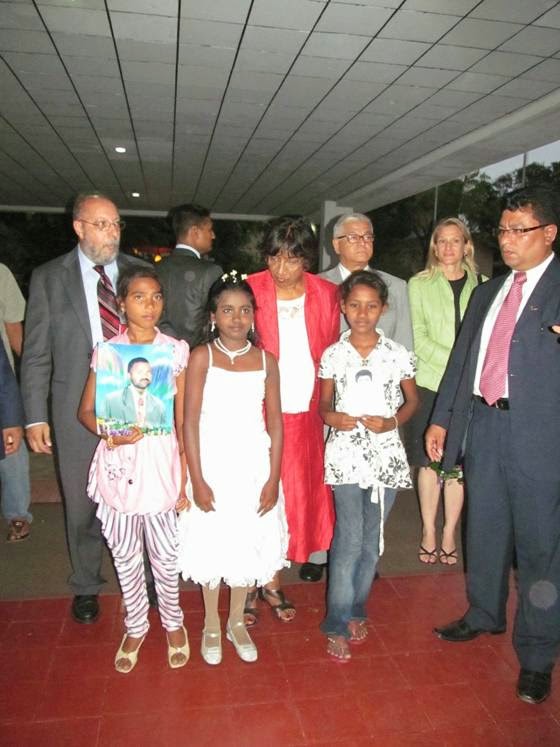 An outpouring of international pressure managed to secure the release of two Sri Lankan human rights defenders, arrested without evidence early in the week. But a third remains in detention, along with many others held under the unjust Prevention of Terrorism Act, which allows the Sri Lankan Government to hold people without evidence for up to 18 months.

Jeyakumary Balendran led the demonstrations when David Cameron went to Jaffna, and her daughter garlanded UN High Commissioner Navi Pillay when she visited Sri Lanka. The Government of Sri Lanka are gambling on the international community not paying as much attention to her arrest because she doesn’t speak English, and is a Hindu Tamil woman, a minority who have very little voice in international affairs.

Please prove them wrong by pushing for her release, and that of others held under the PTA.