Homeless for five years: NAFSO investigate the plight of the villagers of Mullikulam.

More than 400 internally displaced Catholic Tamil families in Mannar province are claiming the right to return to their land, for the second time in twenty years, after the Navy blocked the area: labelling it as a high-security-zone. 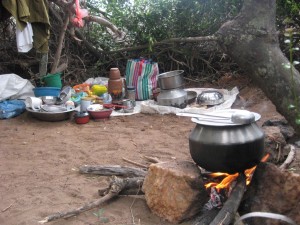 Mullikulam village, in Mannar province (northern Sri Lanka), is located on the small strip of land which nearly connects Sri Lanka to India (and used to via a ferry service). It therefore remains a strategic area for the Sri Lankan army.

In 1992 people were forced to flee when they heard the army was arriving from the sea as part of an operation launched in Kalpitiya. Most of them left immediately, with their clothes on their back as their only possessions. Thanks to an agreement, mediated by Norway, between the LTTE and the Sri Lankan Government the families were however allowed to return in 2002. A few years back the well-known journalist, J.S. Tissainayagam, wrote a fantastic article in the Tamil Canadian, about the poor conditions people had to return to.

But in 2007, once again, as the final stage of the war between the LTTE and the Sri Lankan army began, the Mullikulam’s villagers were told to evacuate by the army with no notice. 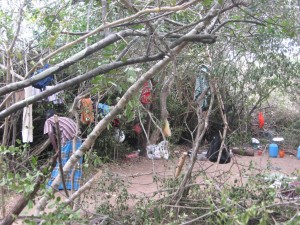 “[The Army] told us to leave all our stuff and not take anything with us. It was only supposed to be for three days, and then we would return to our homes. Five years have passed.”

In theory, these people would be among the first groups of Internally Displaced People (IDP) to benefit from the resettlement programs promoted by the government. In practice, the Government failed to help these people improve their life conditions and most of them remain IDPs: without homes, jobs and thus struggling to survive every day.

The Government never gave to them any kind of explanation for the evacuation; there is a rumour of a project to build a naval base on the site of their village, but no formal announcement has been made. 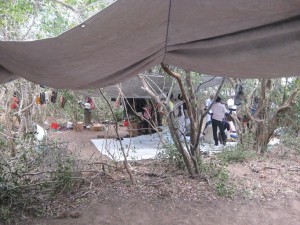 The Government Agent for Mannar said:

In other words forcing the families to relocate to other villages, where they have no homes, no fishing rights, and are not welcome. Many of these unfortunate people now live in the jungle, often on the groundwithout a roof over their head, surrounded by mosquitos, elephants, snakes and other dangerous wildlife. In a totally mean spirited action, the Navy controlling the area finally allowed them to return to the sea and start fishing again; but after this turmoil none of them are able to pay for the necessary basic equipment to begin with.

Sri Lankan civil society has been clamouring for action for some time and many different organizations have denounced the incredibly difficult situation these people have now faced for many years. The National Fisheries Solidarity Movement recently wrote a piece exploring the issue in greater depth.

You can read the full report of NAFSO’s fact-finding mission here.