Here we look at some of the key developments in human rights, justice, and accountability in Sri Lanka over the month of June.

Shani Abeysekara, the former director of the Criminal Investigation Department, who was arrested in late July 2020 on charges of fabricating evidence, spent 10 months in jail before he was granted bail in late June 2021. While in detention awaiting trial, Abeysekara contracted coronavirus, suffered a heart attack, and was forced to undergo emergency surgery.

The Court of Appeal’s bail order stated that the delays in the case demonstrated that the allegations against Shani “are a result of falsification and embellishment, and a creature of afterthought.” The extraordinary judgement supports suspicions that the case against Abeysekara has been invented.

As CID Director, Abeysekara supervised investigations into several emblematic human rights cases, including the forced disappearance of cartoonist Prageeth Ekneligoda, and the murder of journalist Lasantha Wickrematunge. Current members of the government, including the president, have been linked to some of these investigations. The families of Prageeth and Lasantha have claimed that his arrest was retaliation for his role in the investigations.

On 24 June, President Rajapaksa pardoned 94 prisoners, including 16 people convicted under the PTA. Most of the PTA detainees had been held for over ten years. The release of these detainees was widely seen as a token gesture in response to criticism of the PTA and as cover for the controversial release of former MP, Duminda Silva, who was pardoned by the President on the same day.

Duminda Silva was convicted in 2016 alongside four others for the murder of a fellow MP and three of his supporters in a shoot-out during elections in 2011. The verdict was upheld by the Supreme Court in 2018. Silva is a close ally and friend of the Rajapaksa family and commentators have been expecting this pardon for some time. The choice to pardon Silva highlights the government’s disregard for accountability and the rule of law and has been widely denounced by rights activists. The Office of the High Commissioner for Human Rights condemned the pardon as “another example of selective, arbitrary granting of pardons that weakens rule of law and undermines accountability.”

It is not the first time President Rajapaksa has pardoned a convicted murderer – in March 2020 he was strongly criticised for pardoning former soldier Sunil Ratnayake. Ratnayake’s conviction had also been upheld by the Supreme Court. Meanwhile, hundreds of individuals, mostly Tamils and Muslims, are still being held in detention, including Hejaaz Hizbullah and Ahnaf Jazeem.

Poet Ahnaf Jazeem and lawyer Hejaaz Hizbullah have both been in detention for more than a year. There have been increasing calls from activists for their release over recent months, as authorities have failed to provide evidence which justifies their detention.

In a welcome move, the European Parliament named them both in a resolution on 10 June concerning the deteriorating human rights situation in Sri Lanka. The resolution expressed concern about the broad powers afforded to Sri Lankan police under the draconian Prevention of Terrorism Act (PTA), calling on the European Commission to use GSP+ (an EU trade arrangement that incentivises good governance and human rights through tariff preferences) as leverage to demand its repeal.

The resolution criticises Sri Lanka’s culture of impunity, calling on the government of Sri Lanka to investigate allegations of war crimes and grave human rights abuses during the war and to stop appointing military officials implicated in these abuses to government positions. It also asks the European Commission to review its funding of projects supporting counter-terror work in Sri Lanka, as counter-terrorism is being used as a pretext to persecute activists as well as Tamil and Muslim communities, and requests that EU member states increase their support to civil society in Sri Lanka.

While the resolution itself does not bring legislative change, it is a powerful message from the European Parliament to the Sri Lankan government and to the European Commission, which has the power to impose conditions around GSP+. The resolution certainly made an impact in Sri Lanka, receiving significant coverage in the Sri Lankan press and triggering a meeting between government ministers and trade unions. 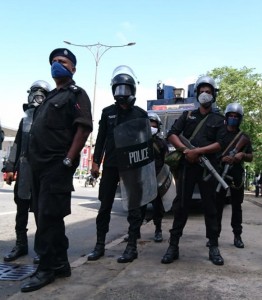 Incidents of brutality by Sri Lankan police and security forces continued to be reported in June 2021.  Since March, there have been at least six deaths in police custody, including the following people who died in June:

Attention on Sri Lankan refugees around the world

In her January report, the High Commissioner included a recommendation for states to review their asylum measures for Sri Lankans, yet in recent months we have seen dozens of Tamil asylum seekers deported from Germany. The situation of a Tamil family denied asylum in Australia also gained headlines after their daughter was medically evacuated from detention on a remote island.

In June, a UK tribunal issued new country guidance addressing the risk of persecution for Sri Lankan nationals, calling the Government of Sri Lanka an authoritarian regime that “draws no material distinction between the violent means of the LTTE and non-violent political advocacy.” This may open the doors for a new approach to Tamil asylum seekers, recognising that they can be at risk of persecution in Sri Lanka even if not members of the LTTE, and could have an impact on other countries’ asylum policies.

UN mechanisms observed lack of progress made on Resolution 46/1

In her speech at June’s Human Rights Council session, the High Commissioner for Human Rights raised concerns relating to Sri Lanka, including the targeting of Muslims and harassment of Tamils. She noted that recent appointments had undermined victims’ trust in the Office of Missing Persons and criticised new counter terror regulations. In their statement, the Core Group on Sri Lanka at the Human Rights Council noted a worrying lack of progress on human rights and echoed the European Parliament in highlighting the PTA as a grave cause for concern.

This scrutiny is welcome as we look ahead to the next Human Rights Council session in September, when the High Commissioner will give an oral update on the situation in Sri Lanka.

This article was researched and written by volunteer Shivani Sanghavi and edited by the Sri Lanka Campaign.