‘I live in fear and go to work.’ New report on the ongoing use of surveillance, harassment and intimidation in Sri Lanka’s North

Today we release a new report looking at a disturbingly persistent aspect of life under the current government in Sri Lanka: the ongoing use of surveillance, harassment and intimidation against war-affected individuals and human rights activists by various state security agencies. You can download it here. Based on interviews with 27 war-affected individuals and human rights activists from the North of Sri Lanka, we find that – despite some significant improvements in the ground situation since the beginning of 2015 – much remains to be done in order for the government to break with the country’s legacy of authoritarianism. The findings reinforce the view that the climate of fear that was once pervasive in Sri Lanka has not lifted evenly or consistently over the past three years, with Tamils living in war-affected areas continuing to bear the brunt of oppressive state practises. As highlighted by the infographics on this page, these practises are deployed by a bewildering array of state security agencies, and are aimed at a broad range of individuals – including not only those with past connections to the LTTE (‘Tamil Tigers’), but also war survivors, rights activists, and ordinary citizens engaged in dissent.

Our analysis suggests that the use of overbearing tactics by the state are having a deleterious impact on the liberty and welfare of those targeted. But perhaps even more worryingly, they would appear to pose a serious threat to Sri Lanka’s prospects of building a sustainable peace: by eroding the kind of trust within minority communities that will be needed to achieve lasting reconciliation, reproducing the grievances at the root of the ethnic conflict, and raising the possibility of future crackdowns against those who have spoken out in recent times. As we caution in the report, measures adopted by the Sri Lankan security agencies in the name of preventing violence may in fact be hastening its return.

In the context of ongoing impunity for serious human rights abuses, and with some of the most egregious abusers now threatening a return to power, the report is as much a warning about Sri Lanka’s future as it is an examination of present realities. Unless the current government uses the window of the opportunity before it to enact meaningful change – by bringing perpetrators of past crimes to account, dismantling the oppressive security infrastructure that has accumulated during thirty years of war, and building and strengthening the institutions needed to protect human rights – the worst aspects of Sri Lanka’s recent history could yet repeat themselves. 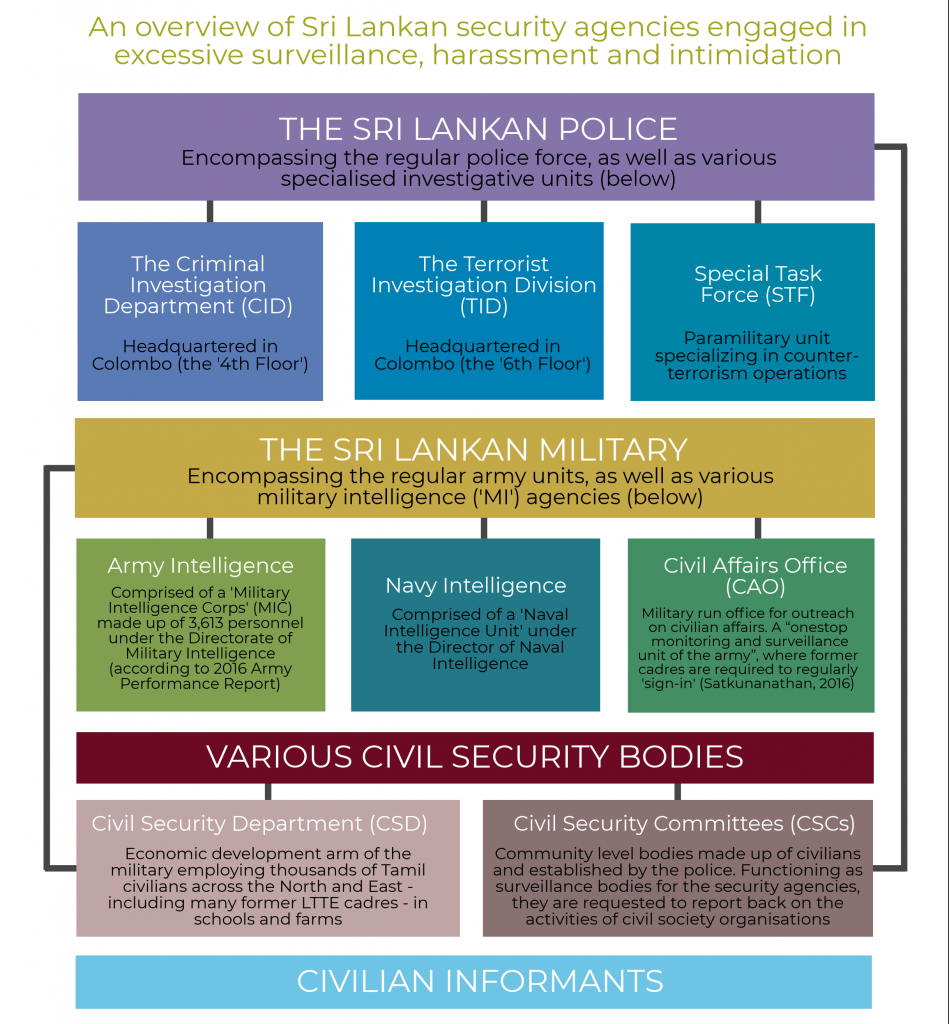 It is also a wake-up call to members of the international community, many of whom we suggest are falling short in terms supporting the kind of ‘at-risk’ individuals identified in this report, and, we fear, are failing to grasp the risks associated with the government of Sri Lanka’s continued inaction in dealing with the past. Ahead of an important upcoming session of the Human Rights Council (HRC) during which the High Commissioner for Human Rights will once again provide an update on Sri Lanka’s progress in implementing Resolution 34/1 – and with only a year to go until the expiry of that Resolution – the aim of this report is to prompt greater discussion of these under-reported issues, and to help generate the determined political will that is needed to address them.

Below, we highlight some of the key takeaway quotes from the report. Please feel free to share them on social media, along with a link to the report. In doing so, you can help us ensure that the findings and recommendations receive the attention that they require – and that that the rights of war-affected individuals and human rights activists to go about their work and lives freely are respected.

We take this opportunity to once again thank the facilitators and interviewees who took part in this research, many of whom did so despite the risks to their own safety and well-being. 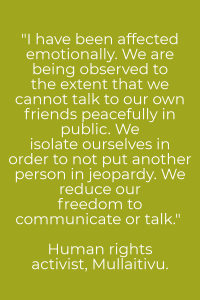 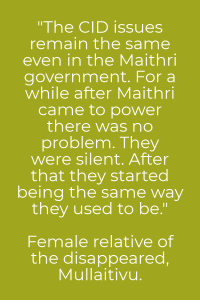 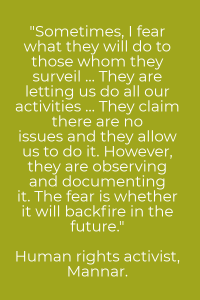 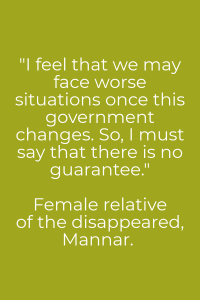 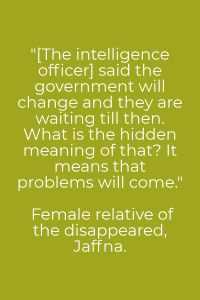 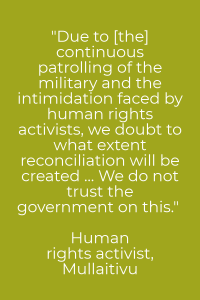 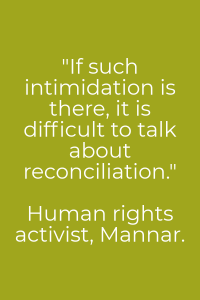 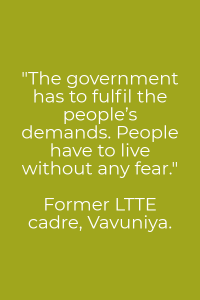 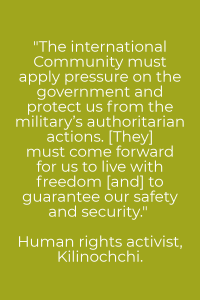 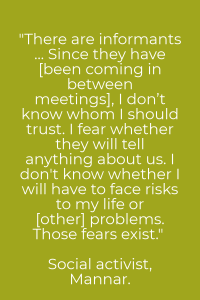 Support work like this? Please help us maximise its impact and ensure that we can carry out similar projects in future by making a donation to the Sri Lanka Campaign today. We simply could not do what we do without the generosity of our supporters – people like you.