In solidarity with Sri Lanka’s families of the disappeared: a statement from three continents

The below is a joint statement by the Sri Lanka Campaign, the National Network of the Families of the Disappeared and Missing Nepal (NEFAD), and People for Equality and Relief in Lanka (PEARL), marking the International Day of the Victims of Enforced Disappearances. A PDF version of the statement is available here.

The International Day of the Victims of Enforced Disappearances, which falls today, is an annual commemoration with roots in Latin America. There, in the early 1980s, at a time when much of the region lived under the spectre of authoritarian rule, victims’ groups and non-governmental organisations began mobilising public support to remember the victims of enforced disappearances and to pay tribute to their relatives.[1] Today, following formal recognition of the anniversary by the United Nations in 2011, it is a commemoration that is marked around the world – bringing together victims and survivors, and putting a spotlight on perpetrators and those who continue to protect them.

It is a day that is felt in few places as acutely as Sri Lanka, where it is estimated that there are currently 60,000 to 100,000 unresolved cases of enforced disappearances – most of which were perpetrated by the state. [2] These range from the tens of thousands of Sinhalese youth targeted during the brutal suppression of the JVP uprisings in the late 1980s, to the tens of thousands of civilians and combatants, mostly Tamils, abducted during the war and its aftermath.[3] No community in Sri Lanka has been immune from the state-perpetrated scourge of enforced disappearances, nor the ongoing culture of impunity in which it has thrived, with the Tamil community intentionally targeted by successive regimes over several decades. From aid workers and educators, to religious leaders and journalists, there are few categories of individuals who have been spared from this uniquely devastating crime; one which causes despair and anguish to the families of victims long after it is initially committed.[4]

Today, in the spirit of international solidarity that this annual commemoration was founded upon, we – as human rights groups and associations of affected families from across three continents – pay tribute to all victims of enforced disappearances in Sri Lanka, and stand shoulder to shoulder with their family members who to continue to seek truth and justice. 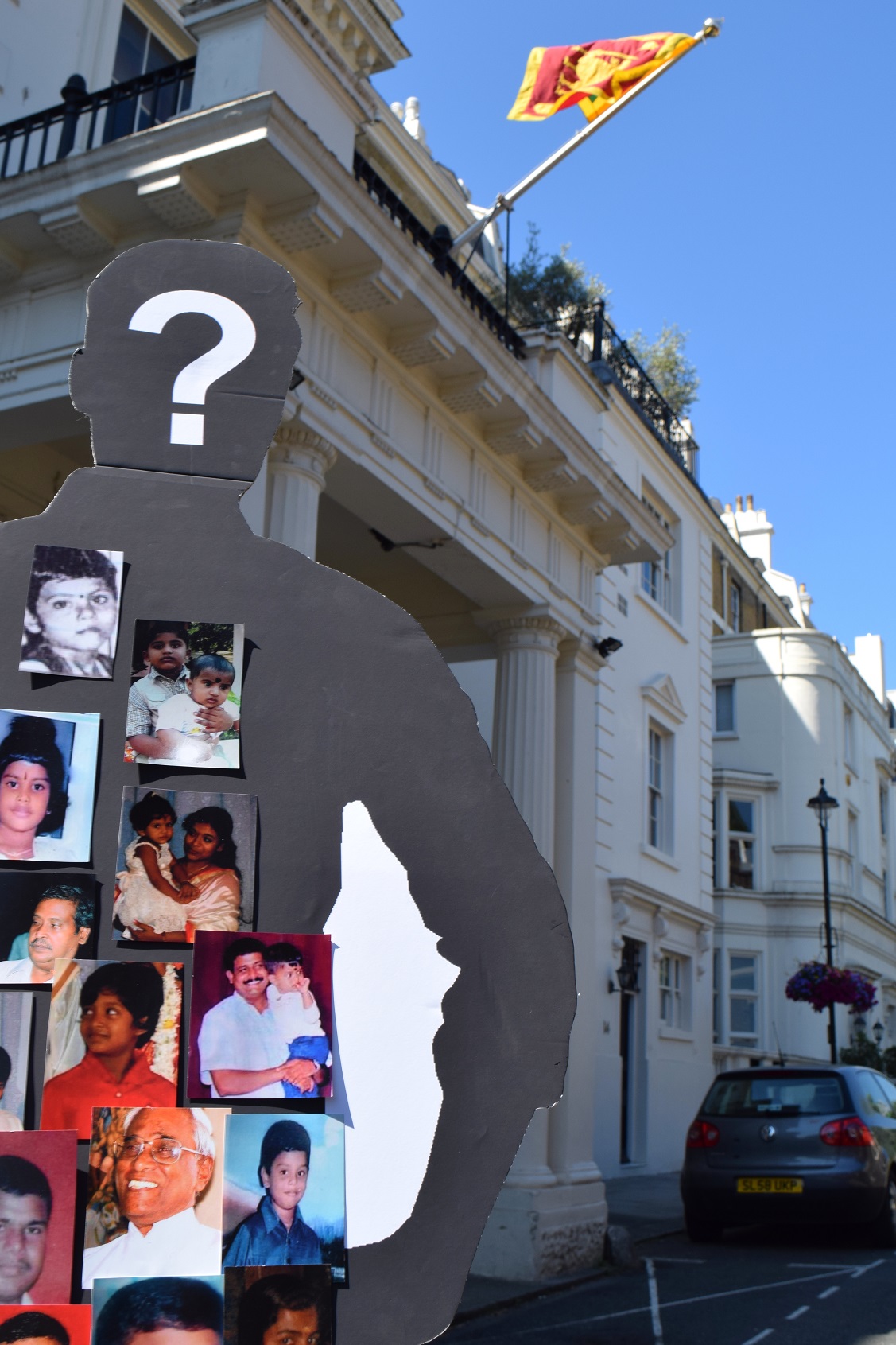 In doing so, we wish to draw particular attention to the extraordinary struggle of those Tamil relatives of the disappeared who have been protesting, largely continuously, for the past year-and-a-half at various makeshift sites across the North and East of Sri Lanka. They have done so in the face of repeated broken promises by Sri Lanka’s leaders to take concrete steps that would help provide answers as to the fate of the disappeared, including the release of lists, known to have been collected by the military, of all those who surrendered or were detained at the end of the war in 2009. Such data is likely to include information about the many hundreds of Tamil civilians – comprising dozens of children as well as a Catholic priest – who were witnessed surrendering to the armed forces at Vadduvakal bridge on 18 May 2009, in what is believed to be the largest single group disappearance in Sri Lanka’s history.[5]

We pay special tribute to the eight relatives of the disappeared who are reported to have passed away since beginning of the protests last Spring.

After sustained international pressure, including through the efforts of the UN Human Rights Council, the government of Sri Lanka has taken some long overdue steps in starting the process of addressing the legacy of enforced disappearances in Sri Lanka, including by establishing the Office on Missing Persons (the OMP) and by passing legislation to criminalise enforced disappearances. However, much remains to be done.

While we welcome the efforts of the OMP to fulfil their mandate of finding the truth, serious ongoing concerns over the design and composition of the office remain. We are encouraged by what appears to be some recognition of the scale of trauma and mistrust among victims – the result of many decades of flawed inquiry mechanisms and government indifference. Yet, as recently stated in a letter by an association of Tamil relatives of the disappeared, there must now be “decisive action to inspire confidence in the institution.”[6] It is incumbent upon the OMP’s officers to ensure that the mechanism initiates its tracing work forthwith and that it begins to deliver on that work within months rather than years. Moreover, it is essential that the OMP’s officers persistently and publicly confront state institutions as they proceed with their investigations – including as regards requesting information from the military – and that they resist any attempts by those in power to dilute and obstruct their work.

We are also concerned that the Bill passed to criminalize enforced disappearances remains insufficient as a guarantee of non-recurrence. This is due to both, on the one hand, flaws in the Bill which may enable perpetrators to escape liability, and, on the other, the scant progress that has been made in dismantling the structures which facilitate the crime, including with regards to reforming the security sector and tackling impunity via criminal prosecutions. We urge all those involved in supporting the OMP’s work not to lose sight of this wider context, and the need for much more progress on these essential fronts.

Finally, we wish to use this opportunity to shine a spotlight on recent threats and intimidation against relatives of the disappeared, including the recent assault against a female Tamil activist from the East of Sri Lanka. The assault, in which an iron rod was thrown at the victim as she rode her bicycle, followed her participation in a session of the UN Human Rights Council. We condemn absolutely what appears to be a reprisal attack, and a chilling attempt to silence the mothers of the disappeared in their search for truth and justice.

Ram Kumar Bhandari, Founder and President, National Network of the Families of the Disappeared and Missing Nepal (NEFAD) – Nepal

People for Equality and Relief in Lanka (PEARL) – USA

The Sri Lanka Campaign for Peace and Justice – UK