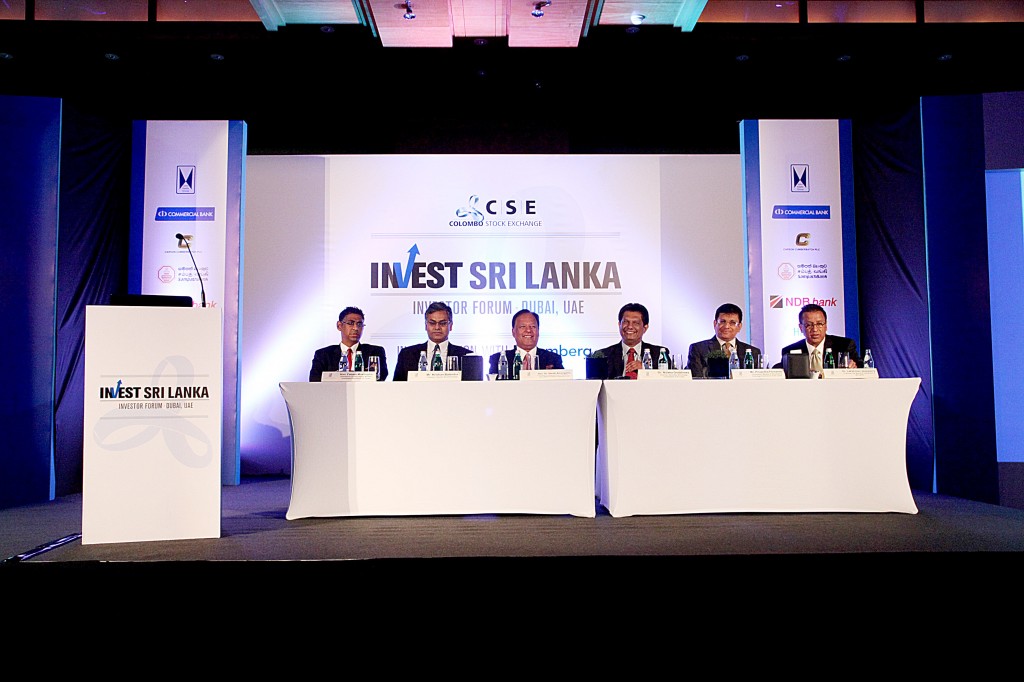 “This week is the 30th anniversary of the start of the Sri Lankan civil war, and is also the week that Cordiant, the world’s biggest fund manager specialising in private loans to emerging markets, has signed its first loan from CELF IV, its new emerging markets private loan fund. The loan is to LOMC, Sri Lanka’s leading micro-credit group, which is using microleasing and small loans as a way to rebuild Sri Lanka’s economy.”

There is a buzz about Sri Lanka among investors and analysts. The pitch above, aside from being offensive and insensitive to the more than 100,000 people who have died in Sri Lanka’s civil war, shows how the attractiveness of Sri Lanka as an investment proposition can trump the taint surrounding Sri Lanka and its pitiful human rights record.

Deemed as one of Asia’s fastest growing economies with a year on year growth rate of 6.6 per cent, for the past few years journalists and analysts have been hailing Sri Lanka’s ‘success story’ and calling on investors to park their cash there, as opposed to some of the more conventional emerging markets options. As a way of quelling any investor unease over human rights, the government has repeatedly asserted that its ‘development program’ benefits the entire country, including Tamil and Sinhalese populations. Many would dispute that, seeing development as going hand in glove with a process of cultural assimilation or “Sinhalisation” of the north and east of Sri Lanka.

Many of these analysts or journalists cite Sri Lanka’s “improved governance” and “government stability”, as proof that the quasi-dictatorship is stable, especially now that the Tamil Tigers have been eradicated.

However, the government has been anything but stable, and the events of the past few weeks is proof that Sri Lankan President Mahinda Rajapaksa is now facing the consequences for years of ruling as a dictator. In the past few weeks Rajapaksa has called for elections to be brought forward to the beginning of January, as his support wanes in the country.

These recent events indicate that contrary to what some fund managers think, by ignoring the country’s human rights record, investors and analysts are taking a big risk, which can detriment their own assets as well as stifle the needs of the Sri Lankan public.

The government’s focus on economic growth has been at the expense of a loss of civil liberties and freedom of speech, but it has not resulted in any great standards of law and order. While a lack of human rights or civil liberties may not concern investors, protected thousands of miles away in their air-conditioned offices in the West – corruption, nepotism and lack of transparency should be a cause for concern.

From impeaching the chief justice in January 2013, to inciting religious violence against Muslims, to the mysterious resignation of Sri Lanka’s High Commissioner to the United Kingdom, Chris Nonis, after allegedly being assaulted by a government MP in New York, Mahinda Rajapaksa has proved that his power is only being maintained by ruling Sri Lanka in the manner of a mafia don: quashing dissent with an iron fist, and allowing a  mixture of nepotism and thuggery to maintain dicipline within his governmen.

Along with controlling politics in Sri Lanka, Rajapaksa’s dynasty also has a tight grip on the economy. The British Government states one of the country’s economic weaknesses is the “arbitrary political interventions in the market” and it encourages companies preparing to do business in Sri Lanka to “consider their strategy for dealing with bribery and corruption”.

According to the Heritage Foundation, “substantial challenges remain, however, in the struggle to promote sustainable economic development” in Sri Lanka, and “institutional weaknesses cannot be addressed without a firmer political commitment to reform.”

For all the talk about Sri Lanka’s economic potential among investors and analysts, much of this hype has been generated by Sri Lanka itself, keen to deflect attention away from its human rights record.

Sri Lanka’s Governor of the Central Bank, Ajith Nivard Cabraal, has embarked on a number of investor roadshows around the world in 2014, stopping off in Singapore, Hong Kong, London, New York and Los Angeles to try and promote Sri Lanka as a place to do business in. According to Cabraal, international investor interest has been high.

In reality, much of Cabraal’s time abroad has been spent fending off questions about the county’s human rights violations. Furthermore, foreign direct investment to the country is low compared with Sri Lanka’s emerging and frontier-market peers, indicating that much of the investor interest generated at these events have not translated into action.

Most of Sri Lanka’s ‘development’ has been funded by debt such as expensive commercial loans from foreign markets. The public debt burden was more than 78 per cent of GDP in 2013. While the government has claimed its development programme has helped citizens, most Sri Lankans feel like they have not benefited in the last few years. According to the Center for Policy Alternatives, the state of the economy and cost of living is adversely affecting Sri Lankan households, with people having to compromise on food quality and medical care. Recent provincial election results revealed a decline in support for the government’s United People’s Freedom Alliance,with many stating that this was due to dissatisfaction with rapidly rising prices and concerns about Rajapaksa’s “nepotistic management style”.

In a speech in October 2013, Ajith Cabraal, described Sri Lanka’s acquisition of a ‘peace dividend’ in the years following the end of the war, and this term has been utilised by financial journalists to promote the country.

However, the public has seen evidence of this peace dividend and in reality Sri Lanka’s military expenditure has increased since the end of the war. In 2014, the government raised defence spending to record levels for a second consecutive year, up 12.25 per cent to 285 billion ($2.22billion) rupees. And according to official sources, the government envisages even more increases in national security spending to over 370 billion rupees ($2.89 billion) by 2017.

Much of this increase in defence expenditure is being spent on the army’s military occupation in the north. At the end of the war there were 200,000 Sri Lankan military personnel, by 2013 this had increased to 300,000 and 400,000 are expected in 2015. Meanwhile 16 of the 19 divisions of the Sri Lankan army are stationed in the northern province and in Vavuniya, for every three civilians, there is one soldier. Yet this increase in military spending is completely unnecessary- there is no separatist movement emerging again in the north and east, with most people simply wanting to rebuild their lives following the bitter civil war.

This lack of credible peace dividend is now manifesting itself in the widespread discontent at the high cost of living for many citizens in the country, and support for the ousting of the president.

Much of Sri Lanka’s ‘development’ can be attributed to flashy infrastructure projects financed by China- a country notorious for its disregard for human rights. Since the end of the civl war, China has become Sri Lanka’s largest loan provider, lending the government around $5bn for projects including roads, railways, international airports, ports and even a $1.2bn coal power plant.

The country’s second international airport, named after none other than the president, was built in Hambantota district in the Southern province at a cost of around $200 million, and was financed with Chinese money. However, it has had few passengers since opening in March 2013. Similarly, some of the new highways, including one built in Hambantota, and another built in Mullaithivu have proved to be worthless to the inhabitants of the areas, many of whom do not own vehicles. Although maybe that was never the aim? Studies suggest sinister reasons for why these highways have ended up costing many dozens of times more than they should.

Much of this foreign money would be better spent improving infrastructure destroyed during the war, such as schools and hospitals or aiding the livelihoods of people in these areas. In Mullaithivu district, cattle and wildlife population outnumber human population, yet there is not a single significant dairy development project in the district.

For some investors, joining the likes of China in Sri Lanka may be tempting .But even for those with scant disregard for human rights or democratic rule, Sri Lanka’s corruption, poor governance and “white elephant” infrastructure projects are a red light. Until Sri Lanka undergoes democratic reforms and tackles its rule of law and human rights issues, it remains an extremely risky investment proposition.