Jeyakumary Balendaran has been released

After just three days shy of a year in jail, Jeyakumary Balendaran has finally been released!

This is fantastic news, and a huge relief for her and her daughter. Her release is due to the phenomenal work of a small but committed band of lawyers, supporters and campaigners working inside Sri Lanka, but they were helped and heartened by you and your support. So thank you for all your postcards, all your petitions, all your tweets and all your messages of support. They meant a lot.

While she is free today we must not forget that many hundreds of other political remain in detention. Under the Prevention of Terrorism Act no evidence is needed to keep someone in jail; none was ever produced against Jeyakumary, and the same is true of many hundreds of other cases like hers. For this reason the Prevention of Terrorism Act must be repealed and all those held under it released. If you are able to help cover our running costs and support campaigning to this end then please do donate here.

We will soon let you know about our next campaign. But in the meantime we wanted to let you know the good news, and say thank you. 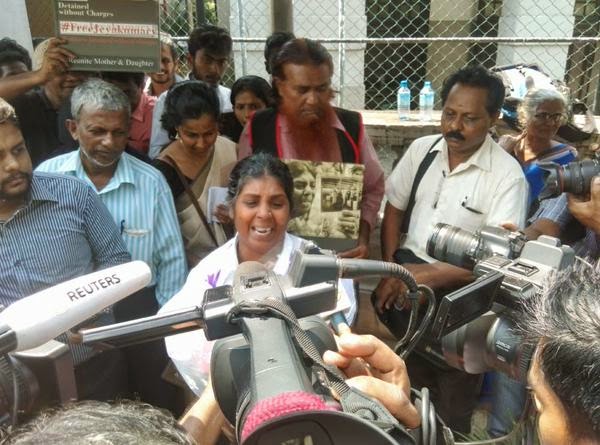 Here was our full statement on her release:

After 362 days in detention without charge Jeyakumary Balendaran was today released on 200,000 LKR bail (just over £2,200 or $3,300)/. She will still be subjected to some restrictions, including monthly police reporting and having her passport confiscated. Details on other restrictions may follow. Six other detainees, including Geethasudha: a pregnant woman arrested last year, and 64 year old Mahalingam Padmawathi were also released.

“This is fantastic news, and a huge relief for her and her daughter. Her release is due to the phenomenal work of a small but committed band of lawyers, supporters and campaigners working inside Sri Lanka.

“Jeyakumary’s detention made it hard to accept the idea that there had been any meaningful change in Sri Lanka. Her release gives us greater cause for hope. But the true test will be whether her release marks the beginning of a broader reversal in a pattern of harassment by the security forces against families of the disappeared and other Tamil activists in the North and East of Sri Lanka. Jeyakumary’s detention had chilling effect on the willingness of these individuals to speak out. This effect will only cease if the military and security forces stop their campaign of intimidation.Reports on the ground, and the persistence of high levels of military personnel in these areas, suggest that this process has yet to begin.

“Jeyakumary should never have gone to jail. At no point was any evidence presented against her. The fact that she could be still be detained for three days shy of a year demonstrates the unjust nature of the Prevention of Terrorism Act (PTA). This act is completely incompatible with a fair and just society, and it is high time it was scrapped. It seems around 300 people are still being held under the PTA, although the exact number is unknown, and given the complete lack of due process these people have received they must be considered political prisoners.”