Joint letter to the EU Parliament: call to reject the EU Commission’s proposal to restore GSP+ to Sri Lanka

Earlier last month the Sri Lanka Campaign wrote an open letter to the EU Commission calling on it to postpone a decision to restore GSP+ preferential trade status to Sri Lanka in light of ongoing concerns about the widespread and systematic use of torture in the country – concerns corroborated by numerous civil society organisations, the UN Committee Against Torture, and now also the UN Special Rapporteur on Torture. 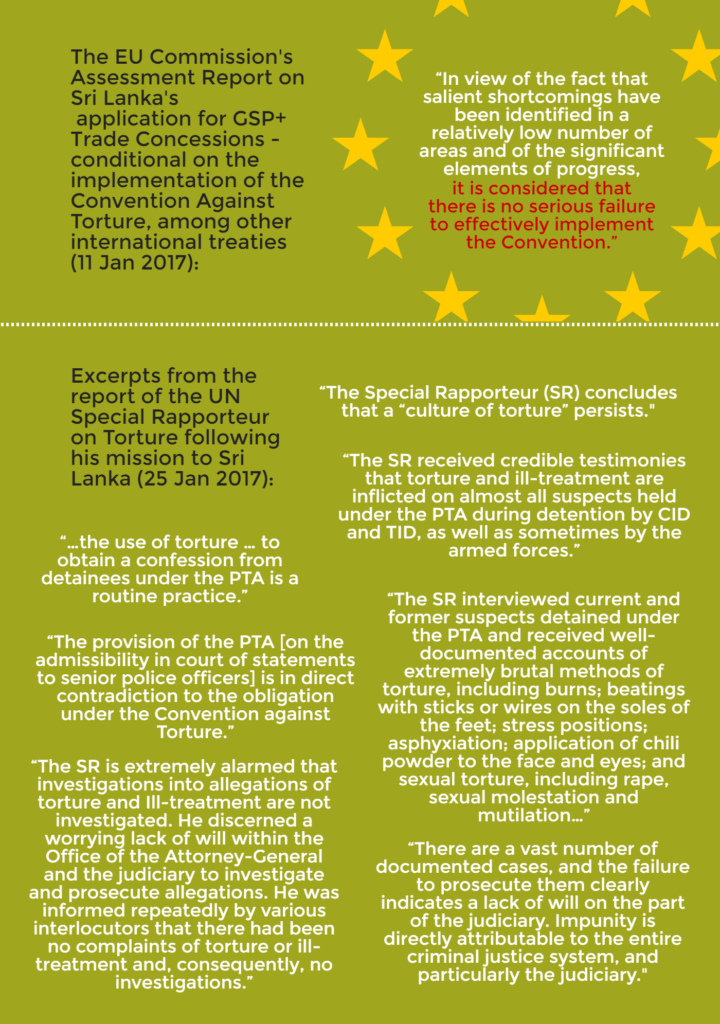 Undeterred, the EU Commission announced on 11th January that it had made a formal proposal for the restoration of GSP+. This decision was based on the findings of an assessment report in which it found there to be “no serious failure” of the implementation of the Convention Against Torture – one of several key international treaties upon which the system of trade privileges is conditional. In announcing the proposal, no explanation was given as to why the Commission now appeared to disregard the various conditions – including this 15-point criteria – which it had previously insisted were necessary for the return of GSP+ and today remain largely unfulfilled.

In order to be enacted, the proposal now requires ratification from the EU Parliament. The deadline for this lies at either 2 or 4 months (i.e. 12 March or 12 May), as determined by an initial vote in the International Trade Committee (INTA) within the Parliament.

In light of the EU Commission’s failure to take a stand on the issue, the Sri Lanka Campaign, along with a group of experts and civil society organisations working on the issue of torture, has today written to MEPs urging them to refuse to ratify the proposal until meaningful progress is made by the government of Sri Lanka to implement the Convention Against Torture.

In it, we provide a detailed critique of the flawed factual analysis which forms the basis of the EU Commission’s assessment and decision. We further request that members of Parliament to ensure that the deadline for the ratification of the proposal is extended to 4 months and suggest, in the eventuality of ratification, the adoption of clear achievable benchmarks for monitoring progress as outlined by the UN Committee Against Torture.

The full letter is available to read here (or click on the image below). Please help our message be heard by forwarding it to your MEP today with why you think the EU Parliament should say #No2GSP+. You can find their contact details here, or their Twitter handle here.