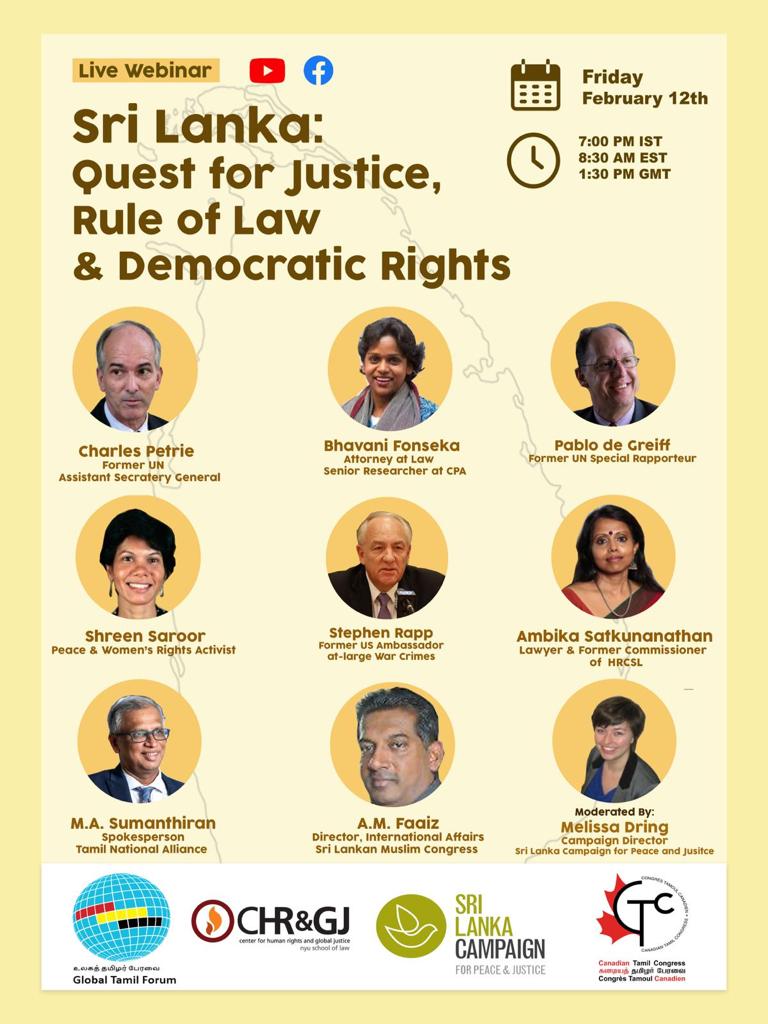 Join us this Friday (12 February) for a live webinar which brings together experts from the UN and Sri Lankan civil society to discuss the quest for justice, rule of law, and democratic rights in Sri Lanka. Send your questions ahead of the event or during the webinar to [email protected].

The event will be live-streamed on the following pages:

Charles Petrie is a former UN Assistant Secretary General with close to 30 years’ experience working in contexts of conflict and famine, and he resigned from the United Nations in part as a result of his inability to get the organisation to investigate one of its own, who had participated in the crime of genocide.

In March 2012, Charles Petrie was designated by the UN Secretary General to lead an internal review of the UN’s actions in Sri Lanka during the last phase of the conflict. The report was submitted to the Secretary General in early November of that year and served as the basis for the elaboration of the Secretary General’s ‘Rights up Front’ policy – a policy that places protection at the forefront of all UN action. Charles Petrie continues to be involved in Myanmar, serving as an advisor to the Norwegian Ministry of Foreign Affairs.

In 2011 the UN Human Rights Council established a mandate for a Special Rapporteur on the promotion of truth, justice, reparation and guarantee of non-recurrence and at the 19th HRC session on 23 March 2012, De Greiff was appointed to the post. As Special Rapporteur, De Greiff has visited Sri Lanka at least four times during 2015 – 2019.

He has also provided advice to a wide range of Governments, the UN and non-governmental organizations, particularly victims’ organizations, truth commissions and multilateral institutions in the area of transitional justice, gender issues and the linkages between justice, security and development.

Stephen J. Rapp is a Senior Fellow at the US Holocaust Memorial Museum’s Centre for Prevention of Genocide and at Oxford University’s Centre for Ethics, Law & Armed Conflict.  He also serves as Chair of the Commission for International Justice and Accountability (CIJA).

From 2009 to 2015, he was US Ambassador-at-Large for Global Criminal Justice.  In October 2009 his office issued a report concluding that there was credible evidence of serious human rights violations committed in Sri Lanka during the final phase of the conflict in 2008-2009.  Rapp made official visits to the country in 2012 and 2014 and engaged actively at the UN Human Rights Council during 2012-2015 in support of a series of resolutions to further genuine accountability in Sri Lanka.

During 2001-2009, he headed the prosecutions of former Liberian President Charles Taylor at the SCSL and of the leaders of the Rwandan hate media at the ICTR.  From 1993 to 2001, he was the United States Attorney in the N. District of Iowa

Bhavani Fonseka is a Senior Researcher at the Centre for Policy Alternatives, an Attorney-at-Law in Sri Lanka, an Author and an Activist.

Shreen Saroor is a Sri Lankan peace and women’s rights activist, Founder of the Mannar Women’s Development Federation to help promote women’s empowerment, winner of many international and local awards for her activism promoting women empowerment, rule of law and human rights and a Writer.

Ameer Faaiz is a Lawyer, Director of International Affairs of Sri Lanka Muslim Congress, a Writer and a Human rights activist.

Mathiaparanan A Sumanthiran is a Member of Parliament, Spokesperson for the Tamil National Alliance and President’s Counsel.

Moderator: Melissa Dring is the Campaign Director for the Sri Lanka Campaign for Peace and Justice – a global non-partisan movement that aims to achieve genuine reconciliation based on accountability for violations of international law, build respect for human rights and the rule of law, and support efforts within Sri Lankan civil society to promote a just and lasting peace.