Lonely Planet made the news recently after the BBC sold it to reclusive Tennessee billionaire Brad Kelley at a reported £80 million loss.

Meanwhile we and our friends at Society for Threatened People have been having a debate with Lonely Planet over their Sri Lanka guide. 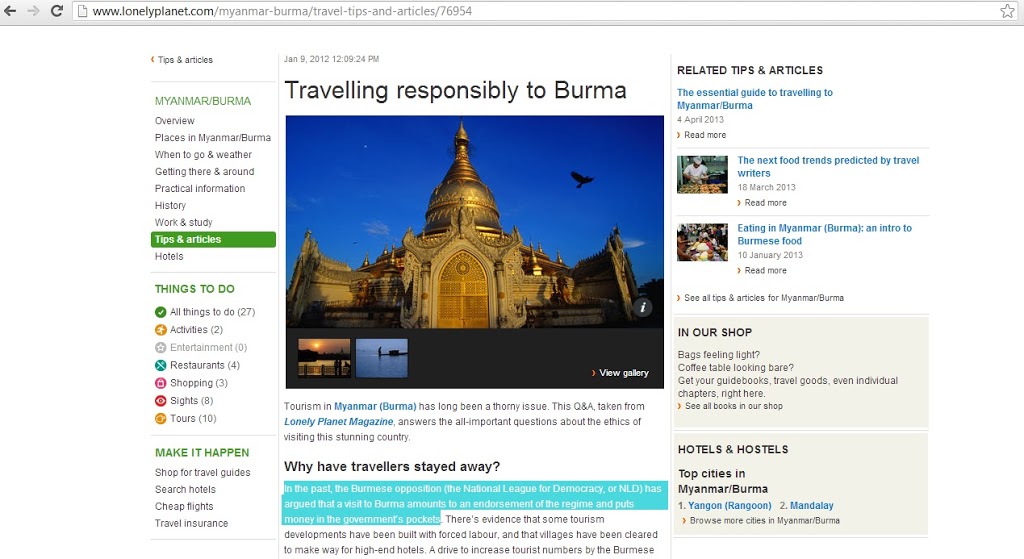 Lonely Planet’s website has a page asking if it is ethical to visit Burma. Why not the same for Sri Lanka?

We wrote to Lonely Planet making these points:Lonely Planet have named Sri Lanka the number one travel destination in the world for 2013. They have done so without regard to the consequences of Sri Lanka’s tourist boom, which is helping to whitewash the reputation of the regime. Furthermore their guide to Sri Lanka recommends three companies (Sri Lankan Airlines, Helitours, and the whale watching tours in Mirissa and ferries in Jaffna) without making any mention of the fact that these companies are owned by the regime itself. Two are owned by the military.

“Declaring a country like Sri Lanka a “number one travel destination” without providing information about the alarming human rights situation is not what we consider responsible tourism. Nevertheless we want to make clear that it is not our intention to call for a boycott of Sri Lanka as a tourist destination generally. Tourism can bring positive benefits to a country. The difficulty is to make sure the money spent,really benefits local communities and not an oppressive regime and alleged or known human rights abusers. If it really is Lonely Planet’s intention to encourage tourists to travel responsibly and have a positive impact, then it is important to provide them with up-to-date information in order to raise awareness and let them make informed choices.”

We further sent them our research, in which we had flagged:

In their response they admitted that as Sri Lanka is a rapidly changing nation, their ‘Sri Lanka Today’ section may no longer reflects the current state of the nation and they will address that in the new edition. However they refused to be drawn on the other issues we raised, and refused to take any immediate steps to redress the serious gap and imbalance in information they have provided to the public, and how this is being exploited by the Sri Lankan authorities.

“…your work is being used for political ends whether you like it or not. Your decision to declare Sri Lanka the number one travel destination in 2013 has been heavily exploited by the Sri Lankan government. A recent example is an interview with Sri Lanka’s High Commissioner in Australia, Admiral Thisara Samarasinghe, broadcast by Radio Australia, in which he dismisses the new Human Rights Watch report on continuing torture and sexual violence as baseless, citing “Lonely Planet research” – and explains that if sexual violence were really occurring in Sri Lanka Lonely Planet, a publisher with a good reputation, would not have declared it the number one travel destination. We only wish we could share the Admiral’s faith in your good judgment.”

We also cited a number of things they could do immediately, such as write up an FAQ on the ethical questions raised by travelling to Sri Lanka, as they have done for Burma.

They did not address these suggestions in their response. Nor did they address their failure to prevent Admiral Samarasinghe from manipulating them politically. They did promise to pass our information on to the report’s authors but they said that the date for a new issue had been fixed at 2015 and would not be brought forward.

It is far from satisfactory, as the Society for Threatened people told the Swiss Sonntags Zeitung (bottom left). Perhaps the Lonely Planet’s new owners, who you can write to here, will be more responsive.