The Sri Lankan Government are engaging in a massive land grab on the Jaffna peninsular.

1474 people have appealed to the courts to quash a Government’s land acquisition decision and to prevent the Government to grab an area of approximately 25.8 square kilometres which includes their homes. The Sri Lankan Government does not make it easy to find out precisely what land is being claimed (although we know it is contained within the divisions of Kopay, Telipellai, Kankasanthurai West, Kankasanthurai Central, Wimannamum South, Theiyyaddi South, Palali South, Ottampulam and Walallai) however it appears the area roughly correlates to the old Palali and Kankasanthurai High Security Zone:

The notice has been occasioned under the Section 2 of the Land Acquisition Act, which states that lands can be acquired for public purposes. However it appears that this “public purpose” is military, and there is no evidence of any public benefit deriving from the land grab, and it is on this basis that the petitioners are challenging the order.Additionally they point out that the claim is internally inconsistant and unreasonable, and that there is no evidence that the military need all the land contained in the area.

The Government also claim that the owners of the land cannot be identified. They clearly didn’t try very hard as lawyers have already identified 1474 landowners in the area and there will almost certainly be more in the days to come. Notices were placed on several trees surrounding the area but none of the landowners were contacted directly, despite the fact that many of them were in daily contact with state officials. The notice was displayed in Tamil only, which is a welcome change from the Sri Lankan Government’s usual insistance on only providing information in Sinhala, but is still illegal as the law requires such notices to be in English, Tamil and Sinhala

The area, over 25 sq km, is vast. The petitioners to the court have pointed out that it is an area equivalent to two thirds the size of Colombo. They included this map to illustrate that point: 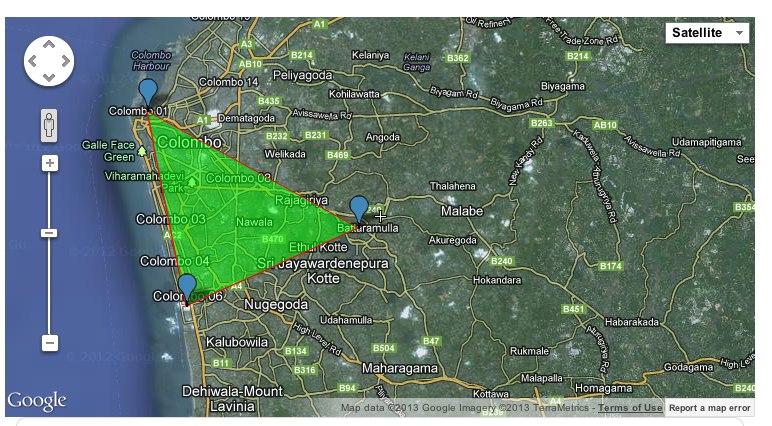 An equivalent area in Colombo

The area is indeed large. It is roughly equivalent to the area in London in between Camden, Dalston, Victoria and Canada Water:

It is also roughly equivalent to the area of Manhattan below Central Park:

Nor is this the only patch of land the Government has seized. We have heard of similar seizures in Killinochi, Mannar and Mullativu districts, although we do not yet have copies of the order.

Meanwhile the Sri Lankan NGO NAFSO has published two reports on land grabs in Kalpitiya and their links to the tourist industry:

“Land grabbing through Tourism: boon or bane in Kalpitiya?“

Both use the testemony of local residents to show how damaging the seizure of land in Kalpitiya for tourism has been. Here is a quick summary:

The tourism industry’s ‘land grabs’ have had a devastating effect on the fishing communities of the Kalpitiya peninsula on the country’s west coast.  “Fishing for life is what the people of Kalpitiya islands have been doing, from the time of their ancestors down to their present descendants,” writes Herman Kumara for NAFSO. “And the government has neglected its duty to protect their human rights in favour of its tourism development strategy”.

Tourism represents one of Sri Lanka’s largest sources of income, particularly since the end of the 26 year civil war in 2009, after which tourism arrivals have more than doubled, topping one million arrivals in 2012. The report calls for a halt to the development of the tourism zone on the peninsula whilst the socio-economic, cultural, and environmental consequences are explored by relevant stakeholders.

The government is accused of using a number of questionable tactics to forcibly remove local Kalpitiya residents. The project will eventually include over 6000 lodging units, a race-course with 20 stables, a golf course, and an underwater restaurant. Herman Kumara argues that tourism development in this area may provide economic opportunities for some, it will push the less-educated local people towards impoverishment, and is being conducted in violation of fundamental human rights

“It will, and is already, contradicting the purpose for which it was originally intended – poverty reduction and an enhanced quality of life for the residents,” writes Kumara, who also included testimony from a number of local people consulted during the production of the report.

“We are being dislodged. We don‘t want our livelihood disturbed by tourism. We are satisfied with our present employment. We need freedom to carry on and a solution to our land problem,” said John Nikulas of Uchchimune, one of the 14 main islands in Kalpitiya.

“As we do not possess any document to prove our ownership for these lands we have to accept government order. But we need a place to continue with our job,” added another local resident.

Land grabs for the army in the north, land grabs for tourism in the west. The Sri Lankan Government seems determined to take as much as it can, while ignoring the impact on local communities.