Memory and Mullivaikkal: Survivors’ Views on Peace and Change in Sri Lanka 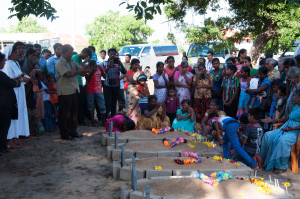 o, on 18th May, a member of the Sri Lanka Campaign for Peace and Justice participated in a war remembrance service at a church on the fringes of Mullivaikal beach. Situated on the North Eastern coast of Sri Lanka, Mullivaikal is an area that experienced the most intense military onslaught of the civil war. As the Sri Lankan army made their final push into the shrinking territory held by the LTTE in early 2009, tens of thousands of civilians are believed to have perished on this thin water-locked stretch of land in a matter of mere weeks. The overwhelming majority of those individuals were killed by the government shells that rained down upon the densely populated, and appallingly squalid, encampments and makeshift bunkers in which many sought refuge. In one of the most heinous – yet by no means isolated – incidents of the war, scores were killed by aerial shelling as they received treatment in two of Mullivaikal’s hospitals. Some were shot by Tiger forces as they attempted to flee.

Six years on, the scale of that violence, and the brutality of those crimes, is difficult to comprehend. The stories and images from that time are belied by the outstanding natural beauty that characterises Mullivaikal today. Whilst a few visible traces of that period remain – bullet-shot homes, shell craters, and reams of humanitarian signage – much of the landscape has been healed, a result of community-led rebuilding efforts in combination with and a huge army-led campaign to clean up the wreckage prior to the visit in 2013 by former UN Human Rights chief Navi Pillay. Prior to that, told one participant, beach combings would often turn up family photo albums and other personal items left behind during those desperate times. 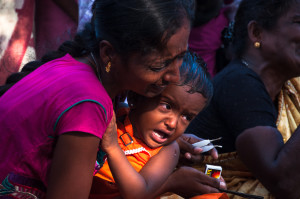 Yet whilst local effort and international pressure may have partly succeeded in returning the physical landscape to some degree of normalcy, the psychological and social devastation wrought by the war remains. On 18 May, as survivors congregated across the North and East to remember the war dead, the ongoing trauma was readily apparent. At the Mullivaikal beach service, mothers, widows, and children wept inconsolably across improvised graves, the styrofoam headstones a terrible reminder of the unceremonious circumstances in which many of their loved ones died.

That this event and others took place at all is an indication of the very modest freedom that has been regained by ordinary Tamils under the new government. In previous years, participants and organizers of such events have been threatened with their lives by the security forces. This year, despite widespread reports across the North of low-level obstruction and intimidation by the police – for example, via court orders and telephone warnings prohibiting individuals from using and travelling to commemoration venues – uniformed military personnel were largely absent from proceedings.

Yet despite the slight opening, the overbearing sense of fear and oppression that characterized the Rajapaksa years has not markedly faded. The ugly presence of undercover police and informant photographers at Mullivaikal beach on 18 May was a disturbing reminder of how limited the change has been in the North and the deeply authoritarian environment in which war-affected communities still live. The stationing of a group of uniformed police a mere 40 yards from the service very clearly spoke to the fact that the Sri Lankan government’s post-war peace has been one built on force and intimidation, rather than meaningful reconciliation. 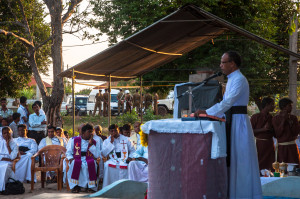 The sustainability of that model remains difficult to envisage. As our recent report examining the views of war survivors in Northern Province underscored, restrictions on the freedom to mourn openly are not simply an obstacle to catharsis for war-affected people – they also pose the risk of further grievances and resentment. As several commentators have highlighted, the deleterious social effects of “blocked grief” resulting from ongoing restrictions on the freedom to mourn are already widespread.

Meanwhile, hopes that the new government would lead a break with the past by taking meaningful first steps towards the establishment of a credible mechanism for truth and justice have largely been dashed. Despite early overtures towards the international community, concrete progress under the new regime has remained scarce. Events of the past few months have indicated an alarming lack of genuine commitment. In March, President Sirisena precluded the possibility of UN investigators being substantively involved in any war crimes inquiry. And in May, in a devastating blow for victims and survivors, the government sent a strong signal about its commitment to dealing with crimes committed by the Sri Lankan security forces with the appointment of Major General Jagath Dias – an individual credibly accused of involvement in the commission of war crimes on a mass scale – as head of the Sri Lankan army.

Many have broached considerable optimism about recent change in Sri Lanka – particularly in relation to the significant progress that has been made in the area of good governance and media freedom. Yet such hopefulness – epitomized by the conciliatory speech made last month by Secretary of State John Kerry in Colombo – stands in stark contrast to the outlook among victims and survivors. Still unable to mourn freely, and with little confidence that their basic demands for truth and justice will be met under current circumstances, the need for international support to provide the momentum for change remains as strong as ever.

The 30th Session of the Human Rights Council in September, which will see the presentation of the UN investigation into war crimes in Sri Lanka, presents an historic opportunity for states to bring pressure to bear to ensure that war-affected communities are heard. To send a message to the international community and the Sri Lankan government that they must not – and cannot – be ignored, please sign the Manifesto for Peace today.