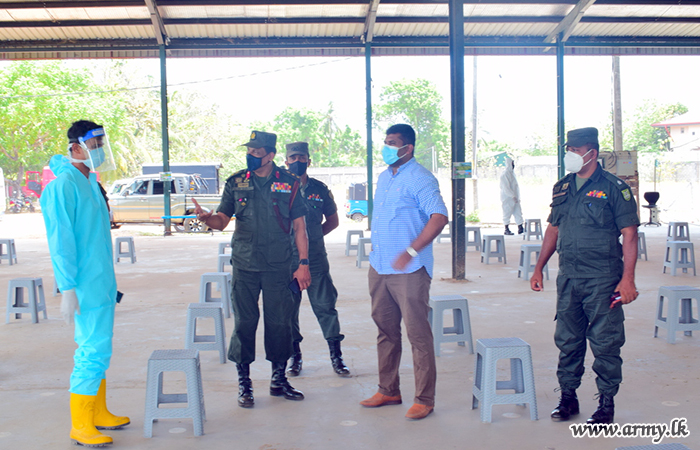 To read the first part of this series on militarisation in Sri Lanka, click here.

The power wielded by the armed forces has been in the spotlight in Sri Lanka in the last few months as the economic crisis continues, with the military playing a prominent role both in distributing aid and suppressing dissent. Whilst militarisation has long been a feature of daily life in Sri Lanka – especially in the Tamil and Muslim-majority Northern and Eastern Provinces – the situation is especially acute in times of crisis and conflict. The government’s heavily militarised response to the COVID-19 pandemic, which began in Sri Lanka in early 2020, illustrates the armed forces’ pervasive impact in Sri Lanka.

On the Front Lines of the Pandemic Response

In the very early months of 2020, Sri Lankan government’s initial response to the outbreak of the COVID-19 pandemic seemed to be in-line with international standards. Airports were closed, a curfew was imposed, and a system of testing and contact tracing was introduced. However, this would not last, as under President Gotabaya Rajapaksa, almost every aspect of governance involved the armed forces. As early as March 2020, a Presidential COVID-19 Task Force was formed, consisting almost exclusively of military officials, whilst the National Operation Centre for the Prevention of COVID-19 Outbreak (NOCPCO) was headed by then-Army Chief and accused war criminal General Shavendra Silva. Army personnel were tasked with crafting and implementing pandemic strategy, whilst intelligence officers were made responsible for contact tracing. In 2021, 25 Major-Generals were appointed to coordinate the pandemic response in each of Sri Lanka’s districts. The country’s vaccine drive was also spearheaded by the military, particularly in the North-East, whilst 63,000 military service members were among the first in Sri Lanka to receive the vaccine in January 2021.

Sri Lanka’s reliance on the military for its COVID-19 response from the very outset of the pandemic left the country woefully unprepared to deal with later waves of the virus. In appointing a slew of Generals and Major-Generals, the government overlooked civilians with more relevant expertise, and the COVID-19 Task Force seems to have ‘lost control’ of the pandemic by October 2021, according to a University of Edinburgh study. Other decisions taken by the government during the pandemic, such as the forced cremation of victims of COVID-19, were obviously discriminatory and clearly demonstrated that the Rajapaksa government’s pandemic response was not based on science.

Making the military the face of Sri Lanka’s pandemic response was also highly damaging for public trust in pandemic measures, particularly in the North and East of the country.  During the final stages of Sri Lanka’s civil war, the armed forces are accused of committing mass atrocities which left tens of thousands of Tamil civilians dead. Many of the men who led that campaign of destruction also led the country’s COVID-19 response, including General Silva himself. Since 2009, Tamils and Muslims in the Northern and Eastern provinces have continually chafed under a substantial and repressive military presence.

The military led efforts to educate the local population about the virus in these provinces and distributed vaccines in Tamil-majority districts. Unfortunately, these soldiers do not instil trust – which is badly needed in any pandemic response – but rather fear, resentment, and suspicion. In Sri Lanka, at least 70% of over-16s have received the second dose of the COVID-19 vaccine in all but 7 districts of the country. 6 of these 7 districts are in the Northern and Eastern provinces. In Kilinochchi, only 44.27% of over-16s have received their second dose. Whilst a comprehensive study of this data has not yet been conducted, vaccine hesitancy – alongside official discrimination and poorer healthcare infrastructure – may partially explain this divide. Any reluctance to trust the armed forces would only have been heightened by the military’s aggressive approach to pandemic management. 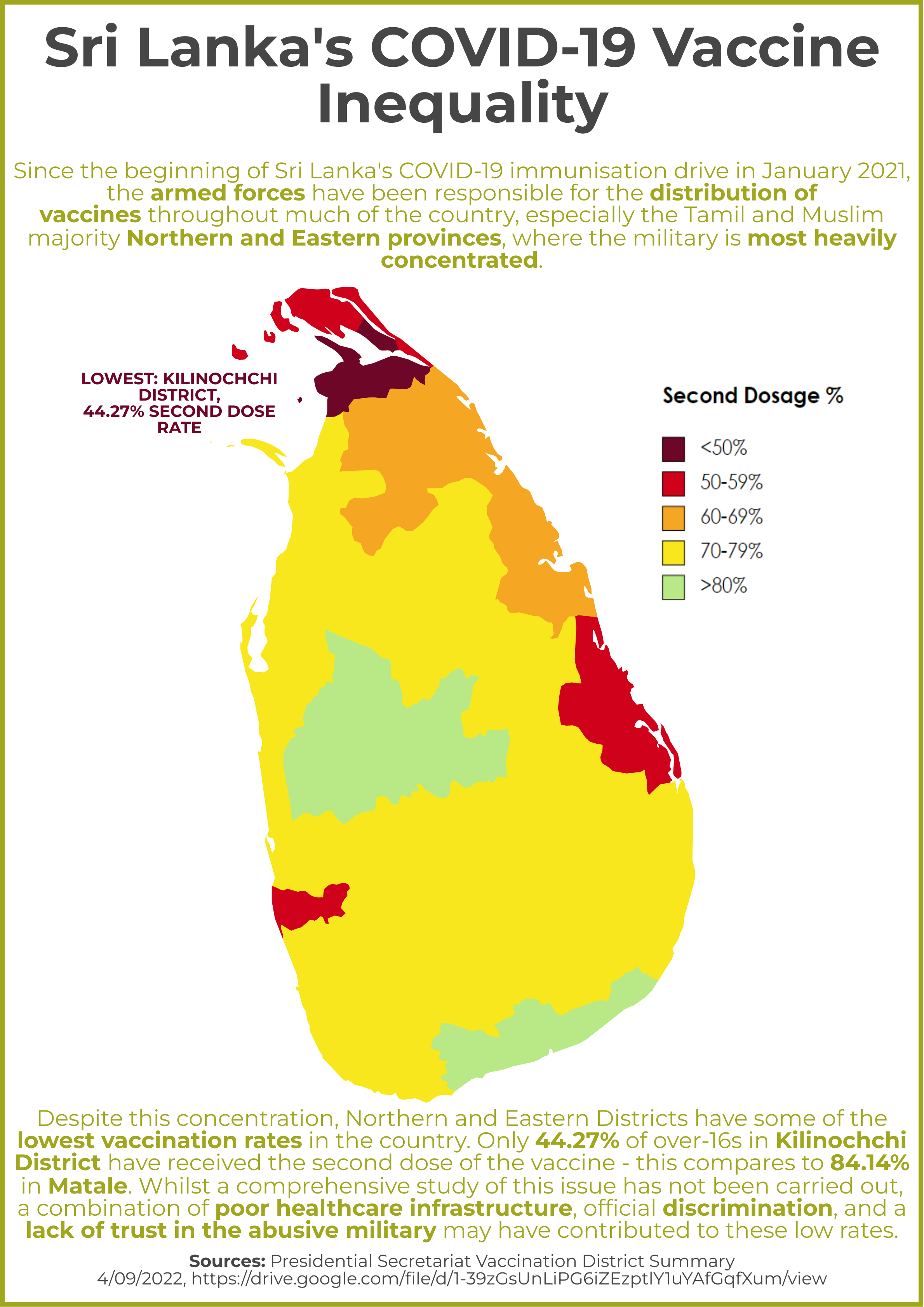 Whilst the pandemic forced many countries to rely on their militaries for some technical or logistical support, few expected their armed forces to lead the national pandemic response. Sri Lanka’s military, which has a history of mass violence, intimidation, and torture, behaved in a typically heavy-handed fashion when enforcing lockdowns, curfews, and quarantines.

By the end of April 2020, almost 40,000 Sri Lankans had been arrested by the police or armed forces for violating curfew. Relief workers in Jaffna reported being arrested for not possessing curfew passes whilst distributing aid, and even volunteers with passes claim that they were harassed by the police and the armed forces. The Sri Lankan government used the army to suppress dissent, protest, and memorialisation, using the pandemic as an excuse to crack down on freedom of expression and assembly.

The army also responded aggressively and callously to local outbreaks of the disease. During a military-imposed curfew in Katunayake Free Trade Zone in Negombo in October 2020, the military rounded up factory workers in the dead of night, who were given only minutes to pack their bags before being shipped off to quarantine centres on crowded busses, without being informed of where they were going. These centres were reportedly unsanitary, without proper food or testing facilities.

Sri Lanka’s overwhelmingly ethnically Sinhalese military has further demonstrated clear prejudices against Tamils and Muslims in its management of COVID-19. Throughout the entire pandemic, Sri Lanka witnessed a rise in Islamophobic prejudice, with government ministers stoking rumours that Muslims are disproportionately responsible for spreading the disease. The military’s curfew enforcement has also displayed anti-Muslim prejudice on several occasions, such as when soldiers forced Muslims in Eravur to kneel on the streets for violating lockdown restrictions.

Most COVID-19 quarantine facilities were located in the North and East of the country, and both the government and armed forces have ignored local concerns when converting public buildings into quarantine centres in these provinces. In March 2020, following protests in Hendala, Western Province, the military decided against building a quarantine centre in that town, and instead occupied a university campus in Batticaloa, Eastern Province, despite local protests in that city. Similar protests in Jaffna and Mullaitivu also came to nothing. 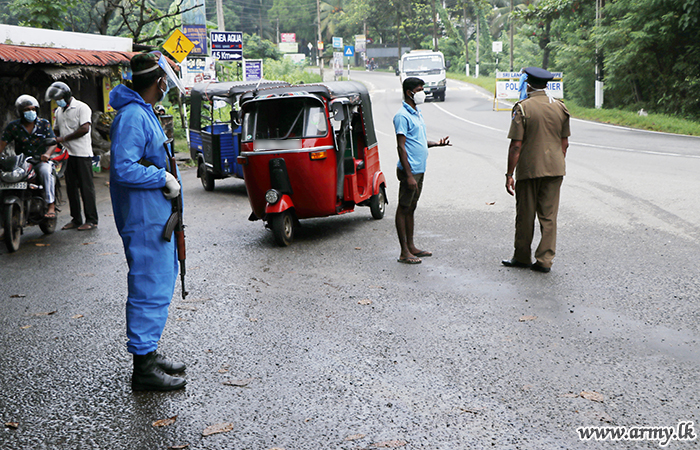 The military’s aggressive, discriminatory, and heavy-handed management of the COVID-19 pandemic is reflective of the culture of impunity that runs throughout the institution. Active military commanders in Sri Lanka have been accused of command responsibility for mass atrocity crimes during the civil war and have faced no consequences for these credible allegations – instead, they have continued to be promoted through the ranks. The military is continually granted undue influence in the running of the country, and the management of crises like the COVID-19 pandemic. This lack of consequences and nearly unchecked power has meant that abuse is almost inevitable. Accountability for wartime atrocities, coupled with a major reduction in the size and influence of the armed forces, is required to protect all in Sri Lanka – during both times of crisis and times of relative peace.