Mob storms meeting of relatives of the disappeared – pt 1

This is part one of a three part series on the incidents surrounding the storming of a meeting in Colombo by a mob of Government supporters last Tuesday. Here we provide a narrative of events and some photos and footage from the scene (you can read more in this piece in Groundviews). In part two we will go on to analyse these events, and in part three we will talk about the aftermath of the event and reactions from both sides, including an analysis of the inaccurate and libelous statements made by by Ven. Angulugalle Siri Jinananda Thera, one of the ringleaders of the mob, on the following day. 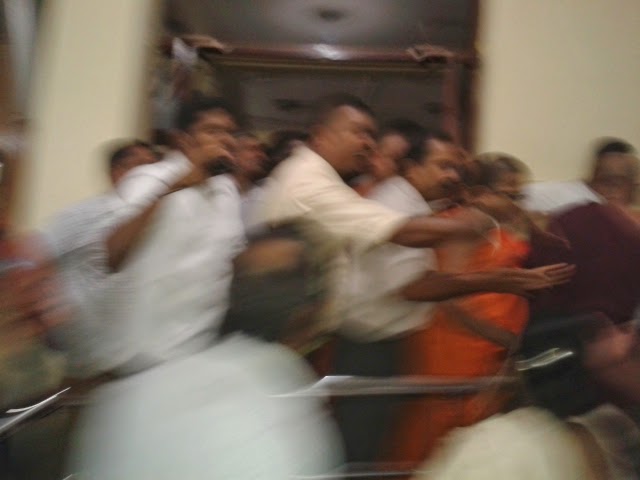 On Monday 4th August, families of disappeared persons from the North of Sri Lanka met to share their stories of loss with civil society groups and members of the diplomatic community. The private meeting was organised by Families of the Disappeared (FoD), an organisation which campaigns for the rights of disappeared Sri Lankans. FoD had arranged for 25 families representing 5 districts in the Tamil-populated North of the country to gather and speak of their experiences in a ‘listening and sharing’ session at the Centre for Society and Religion (CSR) in Maradana, Colombo. The event was to be followed by an exchange between mothers, from both the North and South, who have experienced similar losses.

But at around 3.15pm, during the delivery of a moving testimony by one of the grieving mothers in attendance, a mob of between 20-40 persons led by a group of men in Buddhist monk robes stormed the building where the session was taking place and attempted to break into the meeting room. The organisers and other civil society activists in attendance rushed to block their path, successfully preventing the mob from entering the room.

Among the various abusive, untrue, and slanderous allegations made by the mob, they accused those present of being family members of Mahaveer (LTTE martyrs), and the human rights activists and clergymen organising the event of conspiring to defame the Sri Lankan government and betraying the country. They further claimed that families in attendance had been invited there by foreign NGOs to give evidence against the Government in exchange for payment. We go on to analyse these claims in part three. In an apparent attempt at intimidation, members of the mob also took photos and video footage of the meeting, whilst women and children in attendance cowered, fearing for their immediate safety and the risk of reprisal upon their return home.

Despite arriving promptly, local police failed to disperse the mob for over 90 minutes. Through the course of the mediation, it became apparent the police had arrived at least in part due to a complaint made by Ven. Angulugalle Siri Jinananda Thera of the Dead and Missing Persons Parents Front (DMPPF) that a meeting ‘against the country’ was taking place. Despite the appeals of the meeting’s organisers and participants, they made no effort to remove or arrest members of the mob – announcing simply that the ‘peace had been disrupted’ and that they could not guarantee the security of any persons inside the hall.

After an announcement by police that the meeting was to be closed, some members of the mob claimed that they had only wanted to participate and share their own experiences as part of the session. The organisers maintained that no one could join the meeting forcibly, but stated that they would be willing to meet and discuss the possibility of future collaboration at a mutually convenient date and place.

Even once the protestors had eventually been ushered out of the hall by police, they remained outside the CSR building until approx. 5.00pm, where they continued to call for the arrest of the meeting’s attendees and clashed with other civil society activists as they arrived at the scene. Ven. Jinananda was then allowed by the police to give an interview to the mainstream media in which he called for Brito Fernando and fellow human rights activist Ms. Nimalka Fernando to be “hung until death legally”. Upon the insistence of the police, five members of FoD’s organising committee then agreed to make their way to the Maradana police station, but on their condition that they would do so to file their own complaint about the incident, rather than to respond to complaints made by DMPFF.

Meanwhile, many of the diplomats present at the event (including personnel from the British, German, French, U.S, Swiss and EU missions) began to express to police their fears for the safety of the participants inside. Whilst several diplomats summoned their security details and were escorted from the building, others, such as Acting Deputy Chief of the US Mission Mike Honigstein, took the right and commendable decision to stay and thus afford protection to those not as well as protected as he.

At the police station, verbal clashes between the mob and FoD organisers continued, with members of the mob claiming to have disrupted the private session on the basis that its organisers were in Colombo to collect evidence against the Government as part of the ongoing UN “OISL” Investigation into alleged serious human rights violation committed between 2002-2011. As we discuss in part three this is not the case, but it is a tragic indictment of the current situation in Sri Lanka that the very suggestion of interacting with a UN human rights mechanism should cause such a response.

Whilst thankfully no one was hurt, and similar episodes are sadly much more commonplace in Sri Lanka’s north and east, this episode also appears to be indicative of the growing pattern of intimidation and silencing of human rights activists and victims in Sri Lanka (the recent upswing in which our Campaigns Director has written about at length here) by both the state and proxy groups. These form part of a strategy which is making it impossible for reconciliation to occur in Sri Lanka. We will examine the various way in which this latest incident seems to fit that pattern in part two of this blog post.