Mob storms meeting of relatives of the disappeared – pt 3

This is the last part a three part series on the incidents surrounding the storming of a meeting in Colombo by a mob of Government supporters last Tuesday. In part one we provided a narrative of events with some photos and footage from the scene. In part two we analysed these events, and in this part we will talk about its aftermath and the reactions from both sides. 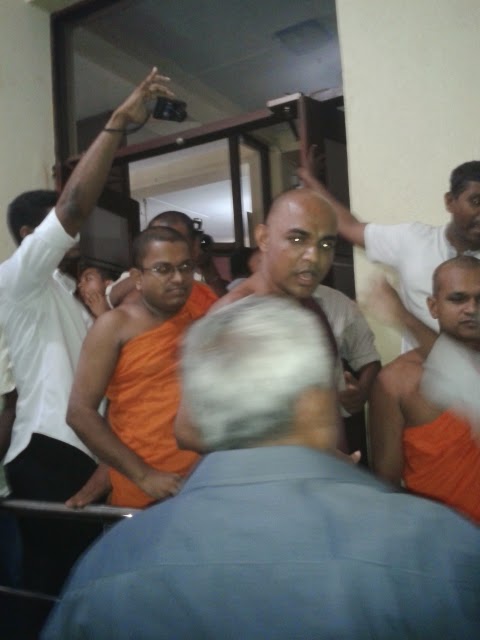 Several statements were issued in the wake of the incident. The US embassy statement accused the local police of supporting the mob and the protesters of being intent only on intimidating and silencing those in attendance. The embassies of Great Britain, France, Germany and Switzerland later followed suit with a fairly bland statement.

The Lawyers’ Collective in Sri Lanka’s statement and the Centre for Policy Alternatives’ condemnation the incident both lamented in particular the continued impunity enjoyed by government supporters.

Meanwhile at a press conference the following day, Ven. Angulugalle Siri Jinananda Thera of the DMPFF claimed full responsibility for the disruption of the meeting and then went on to make a series of unfounded allegations and outright lies. The press conference (in Sinhala) can be seen here:

And you can read a full translation in English here.

Here were some of his most outrageous statements, often made while pointing to a photograph of the activist in question.

As discussed in part two of our blog, many of these lies are fairly dangerous, while the choice of those targeted demonstrates a concerted effort to target prominent and outspoken human rights activists, and in particular those looking to make links between Colombo and grassroots victims and relatives groups in the North.