A narrowing window: our updated scorecard on the government of Sri Lanka’s progress on justice and reconciliation

Today we release an update to our ‘Keep the Promise’ campaign, monitoring the government’s pledges to bring about a meaningful process of justice and reconciliation. Those pledges were contained in UN Human Rights Council Resolutions 30/1 and 34/1, which were adopted in October 2015 and March 2017 following sustained pressure from victims, activists and members of the international community.

Read the findings online, or download them as a PDF report.

As part of the campaign we have broken the Resolutions down into 25 specific commitments, and provided an evaluation of the progress which has been made in relation to each. 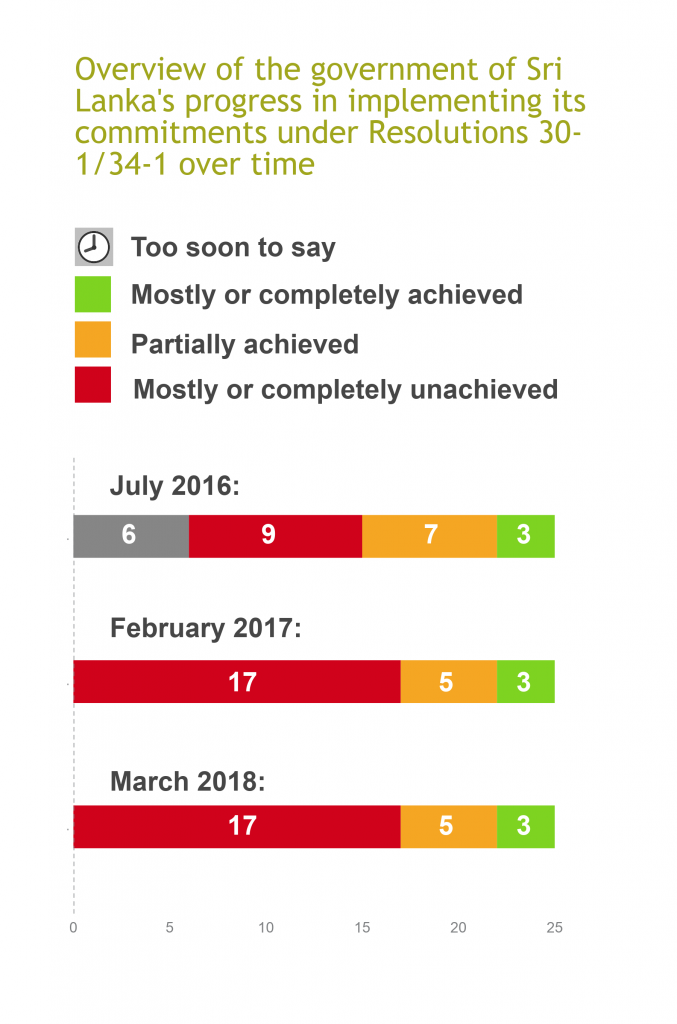 Our latest scorecard paints an extremely worrying picture: two-and-a-half years since the adoption of Resolution 30/1, the overwhelming majority of the commitments made by the government of Sri Lanka remain either mostly or completely unachieved.

On only a handful could the government be said to have lived up to its word. None of the four key transitional justice mechanisms that were pledged have yet been operationalized. And, crucially, almost nothing has been done to tackle Sri Lanka’s deeply rooted culture of impunity, which lies at the heart of repeated cycles of mass violence in the country.

One of those cycles restarted this very week, as mobs of Sinhala Buddhist hardliners, led by monks, began a campaign of violence against members of the Muslim community in Ampara and Kandy. Numerous mosques, homes and businesses have been burnt to the ground. And several individuals have reportedly been killed. According to our sources on the ground, the mob violence has continued to worsen, despite the imposition of a curfew by the authorities, and in some cases, apparently with the complicity of the police. Crucial steps that would help stem the violence, including the arrest of perpetrators and strong denunciations from the government in Colombo, have not been forthcoming.

With the crisis ongoing, and many lives still seriously at risk, the message which the findings carry could not be more relevant or pressing: unless Sri Lanka deals with the ghosts of the past – by holding perpetrators of human rights abuses to account and embarking on a credible process of reconciliation – they will continue to haunt Sri Lanka, again and again.

With only twelve months to go until the ‘expiry’ of the current UN Human Rights Council process, the window of opportunity for meaningful change is narrowing rapidly. The international community must push and encourage the government of Sri Lanka to seize the opportunity and, if necessary to keep the window ajar beyond March 2019 with a continuation of the process. To that end, we offer a number of recommendations for UN member states in the report (included below) which we hope they will take up at the general debate on Sri Lanka at the Human Rights Council on 21st March.

This week’s events in Sri Lanka are a stark reminder of what happens – and what will almost certainly continue to happen – as a result of the government’s failure to deal with the past. Both the findings of our scorecard, and the context in which we release them, should be a wake-up call. It’s time to break the cycle. 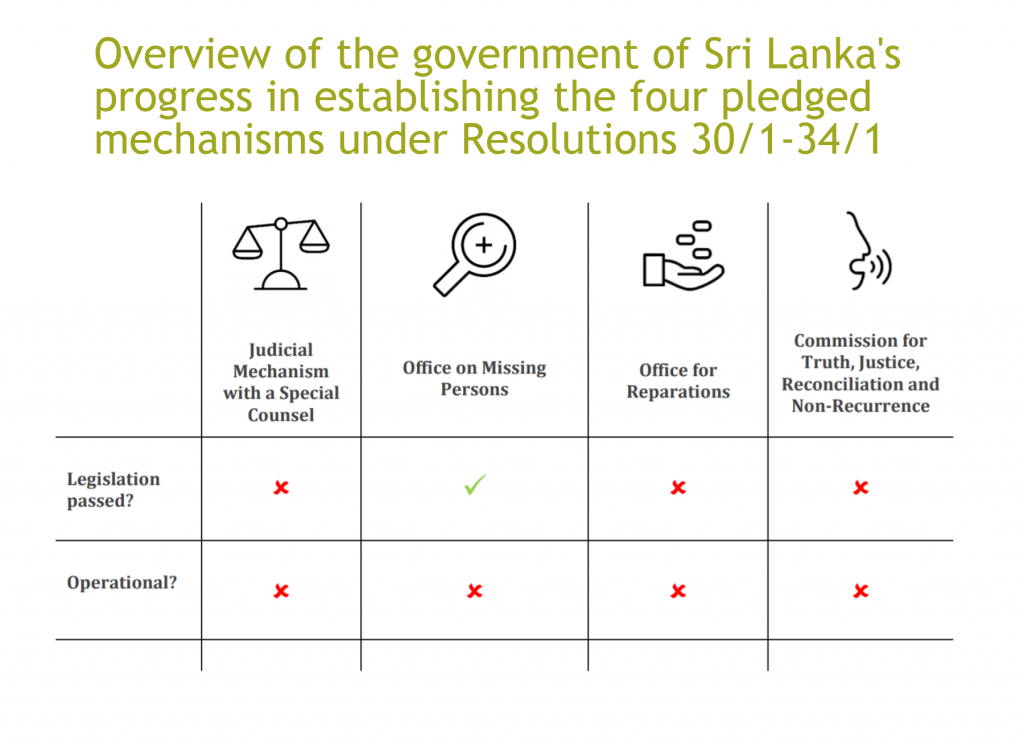 Recommendations to members of the Human Rights Council:

On 21st March members of the Human Rights Council will hold a debate on Sri Lanka’s progress, following the presentation of the High Commissioner for Human Rights’ update on Sri Lanka. We urge them to issue the strongest possible statements of concern which:

[CORRECTION, 13th March 2018: in an earlier version of this blog post, we stated that a child was among those that had reportedly been killed in the violence. This was based on several unconfirmed social media reports, which we have not since been able to verify. We have therefore removed the reference. We apologise unreservedly.]