Nigeria, Boko Haram and the ‘Sri Lankan Model’ of Counter-Insurgency

How do you end an armed insurgency?

In 2009, this question was answered by the Rajapaksa regime with a display of overwhelming brute force against LTTE-held areas in the North East of the country. Driven by an unwavering commitment to the total elimination of the enemy at any cost, an open disregard for international opinion, and a strong emphasis on the control of information from the battlefield, the ‘Sri Lankan Model’ of counter-insurgency as it is now known, has been a decisive factor in shaping Sri Lanka’s recent trajectory. Though drawing to a close the decades long civil war with the LTTE, its role in the commission of war crimes on a mass scale has also precipitated a new era in Sri Lanka’s history, marked by ongoing human rights abuses, impunity, authoritarianism, international isolation and a deeply unstable political settlement.How do you end an armed insurgency? 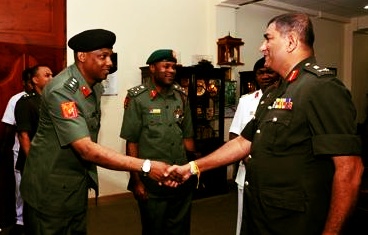 Five years on, it is therefore as surprising as it is appalling that such a model continues to be touted as a viable model for dealing with separatist movements elsewhere. This was the case earlier last month in Nigeria, where following the visit of a Sri Lankan delegation for a military ‘brainstorming session’ and presentation, the Nigerian Chief of Defence Staff released a press statement remarking that “the Nigerian military is seriously considering the counter-insurgency experience of the Sri-Lankan military” in its fight against Boko Haram, a militant Islamist group that has been waging an insurgency since 2009 and which has claimed thousands of civilian lives in the process.

The dire humanitarian concerns associated with this announcement were quickly raised by Andrew Stroehlein at Human Rights Watch who, drawing parallels between the exposure to harm of Boko Haram’s civilian hostages and those civilians used as human shields by the LTTE in 2009, remarked in no uncertain terms: “It is hard to imagine a worse idea”. The reply offered by Nigerian Major General Olukulade did little to alleviate that feeling. Though affirming Nigeria’s human rights obligations and downplaying “the import of interactions between the Nigerian military and the visiting Sri Lankan military delegation”, it essentially failed to backtrack on the original statement whilst re-stating that the Nigerian military welcomed the “well-meaning engagement” of countries such as Sri Lanka.

Whilst the future direction of the Nigerian government’s military response to Boko Haram remains unclear – although what is clear is that its heavy handed tactics have had dire consequences for the civilian population to date – this recent episode serves to underscore the far-reaching implications of what happened in Sri Lanka in 2009, as well as the ongoing need to tackle the perception that it offers an effective model of how to deal with civil strife.

Both the domestic public and the international community will have a key role to play in making this case, and in pushing for alternatives that are peaceable and which adhere to international law. Yet whilst continuing to flag the appalling humanitarian consequences implicit in the ‘Sri Lankan model’, they must also remind political and military leaders of both its fundamental unsustainability as a solution for resolving the root causes of armed insurgency, as well as its broader detrimental impacts on a country’s society and governance. For if we are to judge the ‘Sri Lankan model’ on its longer-term merits, we must also account for the deep grievances that continue to exist in Sri Lanka, as well as the growing patterns of authoritarianism and militarization that have naturally accompanied the failure to account for wide-spread abuses against civilians in 2009, and which may yet lead to a return to war.

As awful and as crude as it may appear, the ‘Sri Lankan model’ of counter-insurgency continues to be showcased around the world in seminars and presentations organized by the Sri Lankan military (for instance in Burma, Turkey, Indonesia, Bangladesh and the Philippines). And worrying still, security officials elsewhere, faced with internal security threats and under strong pressure to act, continue to look to it as a “source of inspiration” (as remarked recently by one senior Pakistani police official). Yet the model that is being sold by the Sri Lankan military to these countries and individuals should instead serve as an important lesson in how not to secure a sustainable peace – not merely because it inevitably leads to human rights violations, but because it simply does not work.