With only three weeks to go until the start of the Commonwealth Heads of Government Meeting in Sri Lanka, pressure is mounting on the Governments of Commonwealth nations to boycott the event – or at the very least, to insist that Sri Lanka does not take up its role as chair of the organisation once the summit is over.

By attending the event, Commonwealth Governments are now risking far more than simply their reputations. Canada’s recent threat to withdraw its $18 million a year of funding, as well as the Gambia’s move to renounce its membership altogether over double standards on human rights, suggest that the very existence of the Commonwealth is now on the line if the meeting goes ahead.

As this shocking BBC video report confirms, widespread human rights violations in Sri Lanka are continuing to this very day. Particularly disturbing are reports of the systematic use of rape and sexual violence against detainees by security forces. Despite leading a high profile campaign on sexual violence (co-launched with Angelina Jolie) in September, Secretary of State William Hague continues to practice a double standard on this issue in his policy towards Sri Lanka.

But there is still time to act. Yesterday, Amnesty International launched a new campaign in which you can send a personal message to William Hague, or to the relevant leaders in India and New Zealand, demanding that they do not give Sri Lanka the Commonwealth seal of approval by attending the summit.

You can do even more by spreading the word. To help things along, we have created this handy campaign ribbon that you can add to your Twitter or Facebook profile picture with just one click. We would also encourage you to take the time to forward this message to your friends and family. The more people we can reach, the stronger our chances of success during this critical window of opportunity. Or you can share this poster: 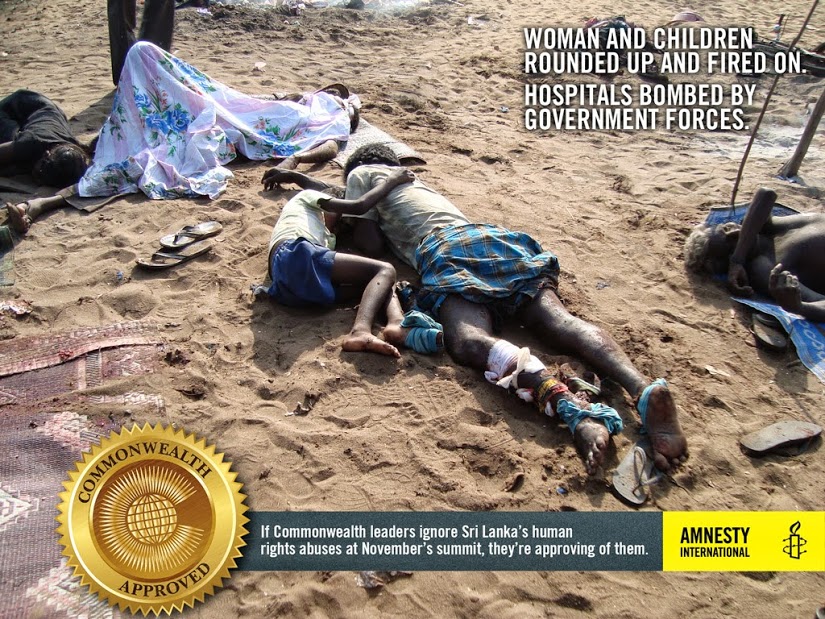