One year on: independent institutions under the 20th Amendment

On 22nd October 2020, the Sri Lankan Parliament passed the 20th Amendment to the Constitution with a two-thirds majority, despite opposition from a wide range of civil society groups and concerns raised by international NGOs and UN experts. One year on, we look at the impact of the amendment on the independent institutions and the changes to the appointment process that have effectively allowed President Gotabaya Rajapaksa to handpick commissioners for the institutions that are supposed to exercise independent oversight of government.

Changes to the appointments process 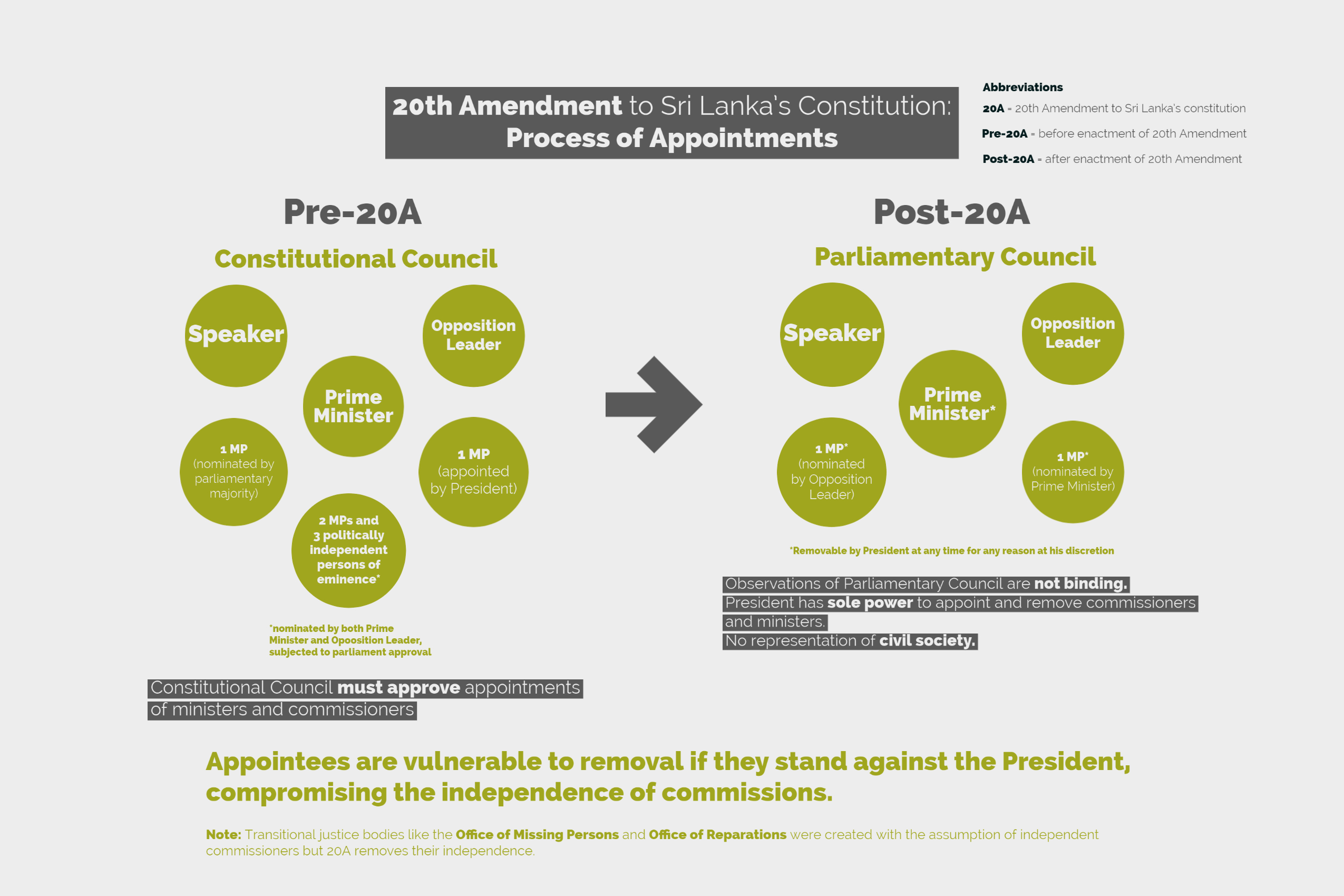 The 20th Amendment to the Constitution made significant changes to the process of appointing commissioners to a number of important institutions as well as the appointment of the Prime Minister and other ministers. The image above illustrates these changes (please click on the image to make it full screen).

Under the 19th Amendment, which was passed under the previous government, appointments to the commissions and to ministerial posts were approved by a Constitutional Council which included representatives of the opposition, parliament, and civil society. A majority of these representatives had to be approved by parliament. No appointments could be made without the approval of this Constitutional Council.

The 20th Amendment introduced a Parliamentary Council in place of the Constitutional Council. The Parliamentary Council has no civil society representation and MPs on the Council are nominated solely by the Prime Minister or Opposition Leader. The President also has the power to remove three members of the five-member Council (except the Opposition Leader and the Speaker of Parliament), giving him effective control of the Council.

Which institutions are affected?

This changed the appointment process for commissioners for a number of important institutions, including:

We will now look in detail at how the new appointments process has been used by the President to appoint new commissioners in a few of these institutions. 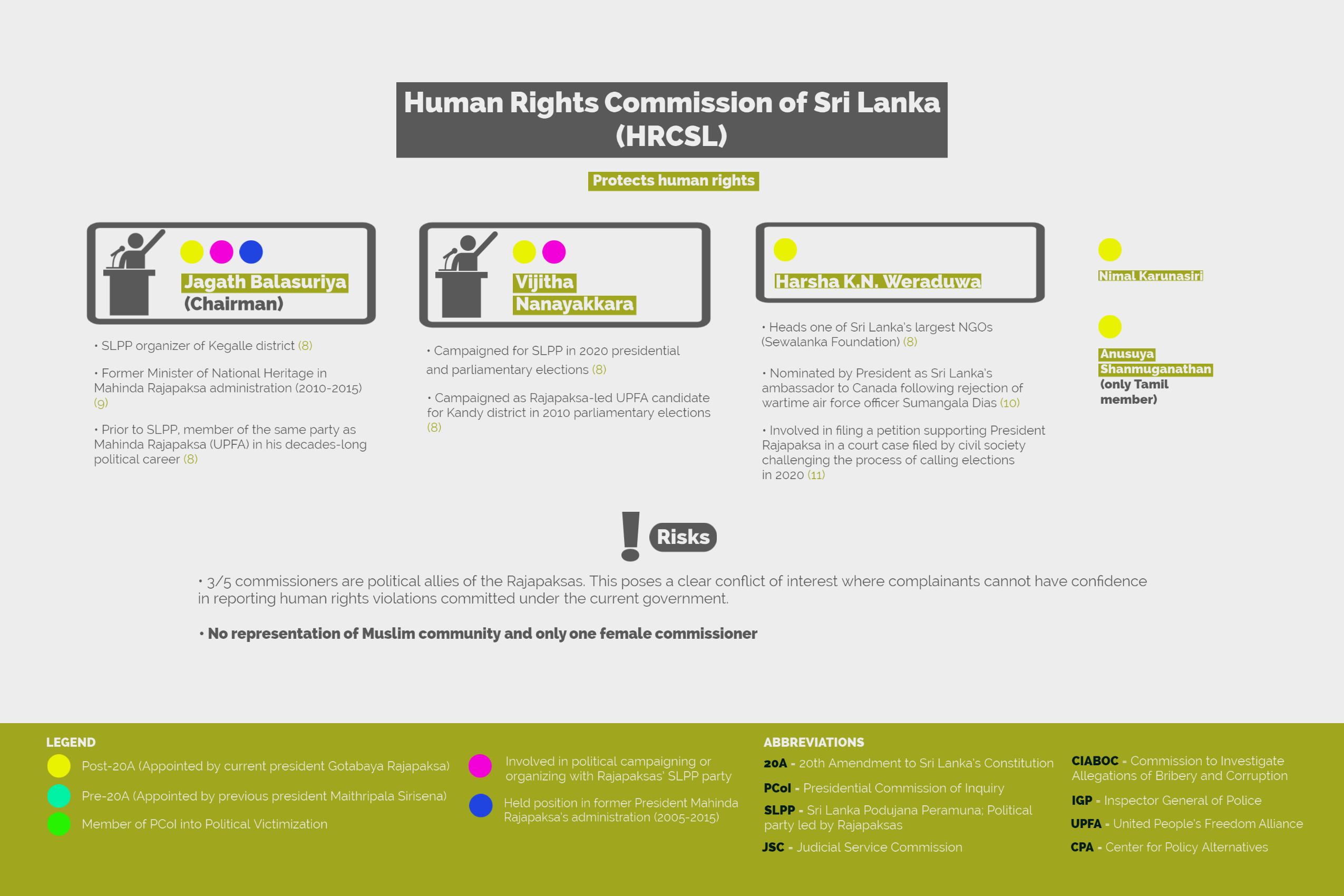 All the commissioners of the Human Rights Commission of Sri Lanka (HRCSL) were replaced shortly after the 20th Amendment was passed. Concerns have been raised about the new commissioners, three of whom have known political links to the ruling Rajapaksa family, including two who have actively campaigned for them in the past. There is only one woman on the commission, and she is also the only Tamil member. There are no Muslim members. 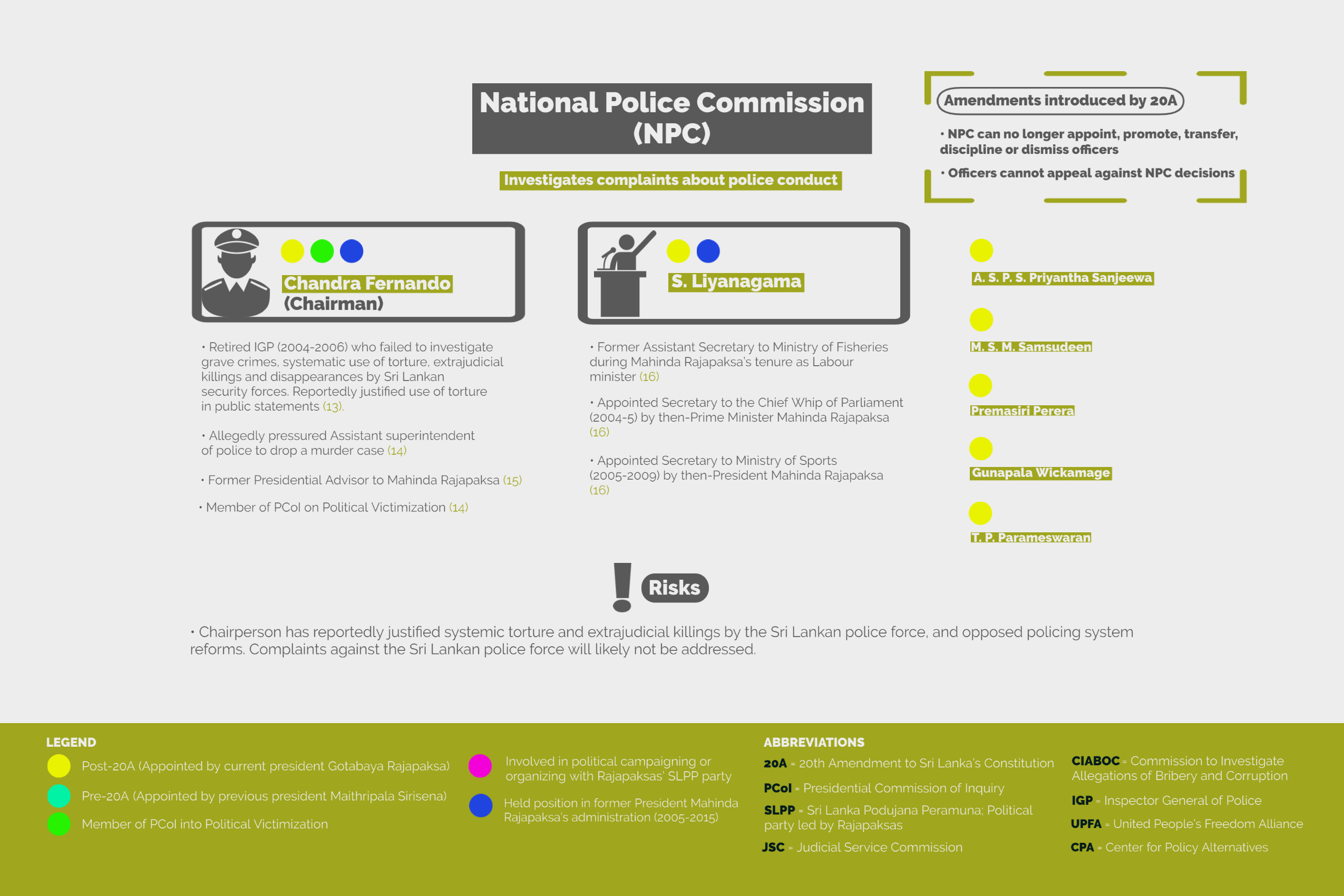 The new chairman of the National Police Commission, Chandra Fernando, was a member of the controversial Presidential Commission of Inquiry (PCOI) on Political Victimisation, which has been accused of political interference in ongoing court cases and police investigations. Fernando has also been criticised for failing to investigate human rights abuses and reportedly justifying the use of torture while Inspector General of Police (IGP) between 2004 and 2006. Both Fernando and fellow member of the NPC Sirisena Liyanagama held positions in the administration under former President Mahinda Rajapaksa. 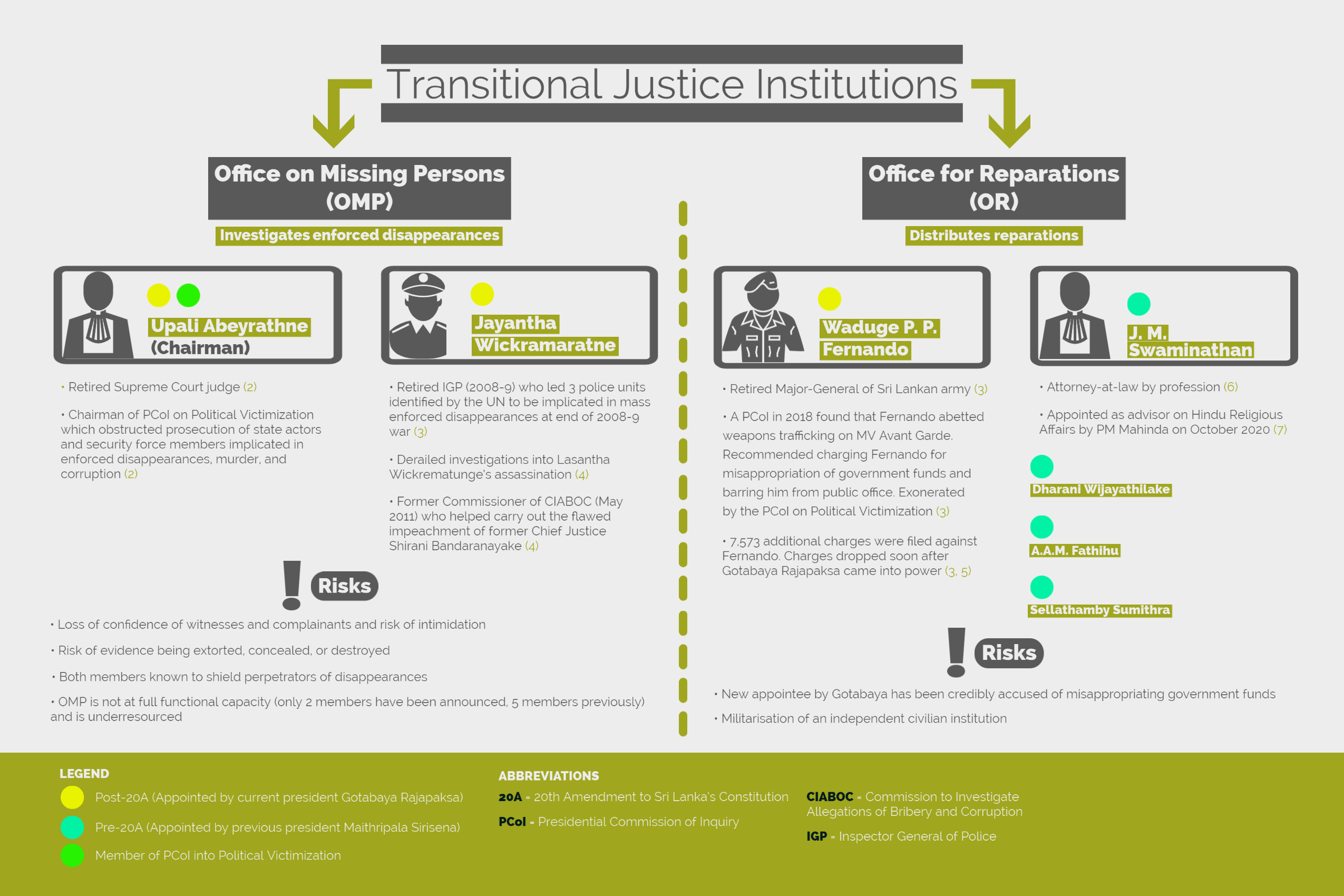 The terms of the original commissioners at the Office on Missing Persons (OMP) came to an end in February 2021. President Rajapaksa has appointed only two commissioners to the OMP under the 20th Amendment, even though there are five available positions. The chairperson of the OMP, Upali Abeyrathne, was the chair of the PCOI on Political Victimisation. The commission interfered in several cases investigating enforced disappearances including that of Prageeth Eknaligoda.

The only other commissioner is Jayantha Wickramaratne, a former IGP who led three police units implicated in mass disappearances and is accused of derailing the investigation into journalist Lasantha Wickrematunge’s murder.

Unlike the other institutions, the President has not replaced the previous members of the Office for Reparations and has only made a single appointment. Waduge P.P. Fernando is a retired military officer who has been accused of involvement in weapons trafficking and misappropriation of government funds. Outstanding charges against Fernando were dropped shortly after President Rajapaksa came to power.

What is the impact of these appointments?

Several of the appointments are patently absurd given the background of the commissioners. Appointees have interfered in cases before court, shown their contempt for international human rights standards, and been accused of involvement in the very abuses they are supposed to be investigating.

The functioning of these commissions, especially the HRCSL and the OMP, is dependent on public trust. How can victims of state abuses be expected to trust commissions led by individuals closely associated with the ruling Rajapaksa family and themselves accused of standing in the way of accountability?

Notably, Abeyrathne halted proceedings against 14 Sri Lankan Navy officers suspected in the abduction and disappearance of 11 Tamil youth in the emblematic “Trinco 11” case.

Additionally in 1999, during his former tenure as District Court judge, Abeyrathne was found guilty by JSC of illegally removing a senior judicial official’s name (Sarath Silva) as co-respondent in divorce case. Abeyrathne was subsequently removed from judicial service but re-admitted after Silva was appointed as Attorney-General.

After Gotabaya was elected to power in November 2019, PCoI on Political Victimization “exonerated” Waduge Fernando based on Fernando’s allegation that the Bribery commission under the Yahapalanaya regime fabricated evidence against him in the floating armory contract case. Furthermore, the 7,573 charges against Fernando (for arms and ammunition trafficking) were also dropped.

As IGP in 2009, Wickramaratne allegedly directed police officers from Mount Lavania to deliberately conceal evidence found in Wickrematunge’s car, including Wickrematunge’s notebook. Furthermore, as CIABOC commissioner in 2011, Wickramaratne was implicated in the impeachment of former Chief Justice Shirani Bandaranayake. Along with former CIABOC members, he was alleged to have abused office powers to frame unfounded charges against Bandaranayake before the Chief Magistrates’ Court, Colombo. This was considered as a favor to then-President Mahinda Rajapaksa.

Moreover, in 2009, Wickramaratne carried out a disinformation campaign against journalists (who exposed wartime mass atrocities committed by then-Mahinda Rajapaksa administration) through alleging a spurious LTTE funding link that was never proven.

In September 2019, 7,573 charges were filed against Fernando for trafficking automatic firearms and live ammunition rounds on Merchant Shipping Vessel MV Avant Garde, in his role as then-CEO of Rakna Lanka security company, in relation to the floating armoury contract.

Shortly after 2010 general elections, Vijitha Nanayakkara was appointed as Vice-Chancellor of Open University of Sri Lanka by then-President Mahinda Rajapaksa.

The images in this piece were researched and created by Sri Lanka Campaign volunteer Risa Thevakumaran. The accompanying text was written by SLC.

You can read more about the impact of the 20th Amendment in our February 2021 report, Reversing Progress: Threats to Human Rights and Reinforced Impunity in Sri Lanka.