Open letter to the EU Commission: call to postpone the decision on the restoration of GSP+ status to Sri Lanka 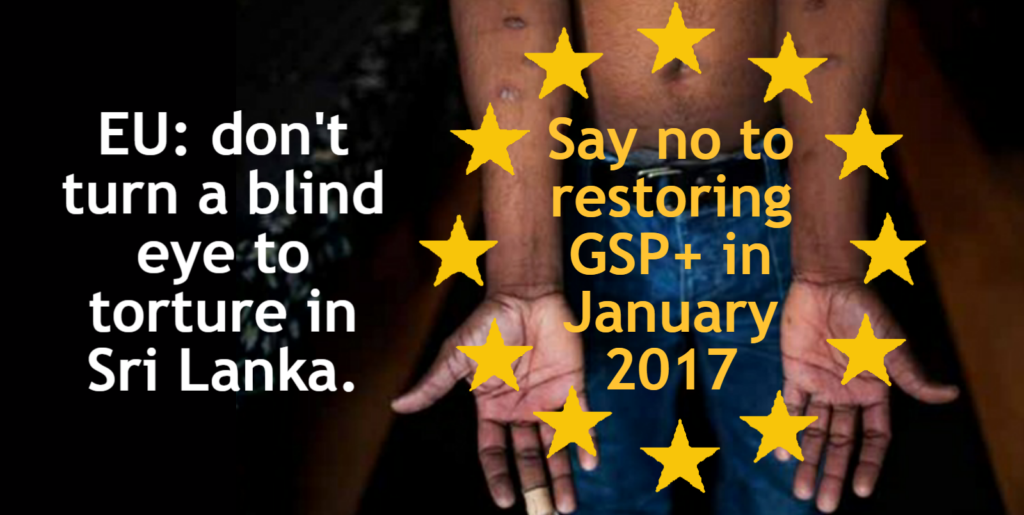 A PDF version of this letter is available here.

The Sri Lanka Campaign for Peace and Justice is deeply concerned by reports that the EU Commission may be preparing to approve the restoration of GSP+ preferential trading status to Sri Lanka later this week.

We wish to draw your attention to our latest campaign[1] in which we call on the members of the Commission to postpone any such decision – at the very least, until the UN Committee Against Torture has had time to evaluate a further implementation report that it requested from the Government of Sri Lanka by 7 December 2017. This request follows from the Committee’s damning progress assessment at Sri Lanka’s fifth periodic review in December, in which it affirmed the Special Rapporteur’s finding that torture remains “common practice” in Sri Lanka and cited multiple failures to implement the necessary institutional safeguards recommended during its previous review.

As of 8 January 2016, the petition had gained 593 signatures. It is a call which has been echoed by various international and local human rights organisations.

Members of the Commission will recall the 15 point criteria that it set out in June 2010 prior to the suspension of GSP+ in August of that year[2]. We note that, based on the Committee’s recent observations, none of those conditions relating to the prevention and elimination of torture (namely, points 3, 4, 5, 6, 12 and 13) have been fulfilled. A decision by the Commission to restore GSP+ at this point in time would therefore both violate its own guidance and seriously undermine the authority of the Committee’s conclusions in relation to them.

Whilst our campaign places special emphasis on the issue of torture, we also call on the Commission to consider the broader context in which a decision on GSP+ must be placed. As you will be aware, the UN Human Rights Council will meet in March 2017 to consider Sri Lanka’s progress in implementing the internationally mandated process of democratic reform and transitional justice laid out in Resolution 30/1 (October 2015). This will follow the publication of a progress report from the High Commissioner for Human Rights Zeid Al Hussein due next month. Given the government of Sri Lanka’s extremely limited progress in this area[3], further international monitoring and scrutiny beyond March 2017 will be essential.

We therefore request that the Commission refrains from any decision on GSP+ until it has had the opportunity to consider the report of the High Commissioner. Failure to do so would not only risk undermining the High Commissioner’s findings and recommendations – it is likely to also seriously weaken the leverage that EU states have over the process in Geneva. Many EU states have placed on record[4] their commitment to an extension of the process at the forthcoming Human Rights Council session. Those states have invested much political will and financial resources into bringing about the current process and we urge the Commission not to frustrate their ability to realise its objectives.

[CORRECTION (12/01/17): an earlier version of this open letter suggested that the (then) forthcoming decision to approve the restoration of GSP+ by the EU Commission was to be guided by a report compiled by Professor Clive Walker, acting as an independent adviser. According to Professor Clive Walker, his report was commissioned by the UN Organisation on Drugs and Crime and was not GSP+ related. We have therefore retracted the relevant paragraph.]