As the Sri Lankan civil war was ending in 2009, Ananthy Sasitharan’s husband Elilan, a Tamil Tiger rebel, surrendered to government forces. He has not been seen again.

Sri Lanka’s Rebel Wife is a powerful short film which follows Ananthy from the parliamentary elections in Jaffna to the halls of the United Nations in Geneva, in her quest to find the truth about her husband and the thousands of others who are still missing.

The screening was followed by a panel discussion, which discussed and expanded on the themes and issues presented in the film. Simon Long, editor-at-large for The Economist, moderated a discussion on the issue of disappearances in Sri Lanka with rights lawyer Dharsha Jegatheeswaran; International Crisis Group’s Senior Sri Lanka Consultant Alan Keenan; BBC journalist Nalini Sivathasan; and director Kannan Arunasalam. Attendees also heard a short statement from author Dr. Minoli Salgado, recorded at a major anti-government protest site in Colombo.

Watch Sri Lanka’s Rebel Wife and read our reflections of the panel discussion below. 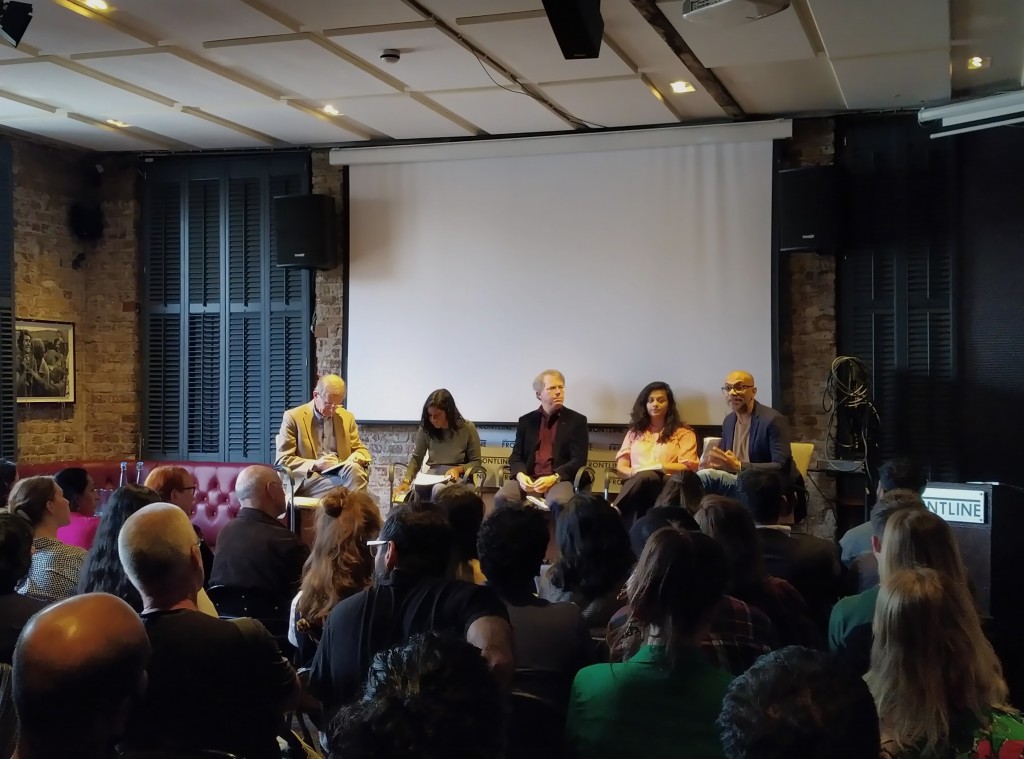 No Justice, No Accountability

The panellists took time to emphasise the bravery of Ananthy Sasitharan not only for her work to bring truth and justice for the Tamil families of the disappeared, but also for agreeing to be part of the film at all. As director Kannan Arunasalam explained, this was at great personal risk to Ananthy. In making the documentary, they were regularly surveilled, particularly whilst shooting at the scene of Elilan’s disappearance, and at one point were even intimidated into stopping filming.

Kannan Arunasalam hopes that his film, released during a time of great turmoil in Sri Lanka, will help shine a spotlight on this often-neglected issue of enforced disappearances. For Ananthy, however, her work does not stop here, and the struggle for truth and justice will continue. Whilst a short film can only go so far, a longer version of Ananthy’s story is in the works.

This use of intimidation is not a new development, nor is it restricted to Ananthy alone. Elilan is one of thousands who have been forcibly disappeared in Sri Lanka. Dharsha Jegatheeswaran spoke of the bravery of many Tamils in the North and East, particularly women, who have been protesting continuously since February 2017 for truth, accountability, and justice for their disappeared loved ones. These protestors were not deterred from travelling to Geneva, or making their voices heard domestically, despite facing harassment from security forces from the very beginning. However, the surveillance and harassment has become even more suffocating since the election of Gotabaya Rajapaksa in 2019, which has forced several leading women to step back from the demonstrations as their family members, including their children, have been threatened.

There was discussion of disappearances as an island-wide phenomenon, which have affected not just the Tamil community but all ethnic groups in Sri Lanka. Alan Keenan spoke of the JVP uprising in the late 1980s, during which time thousands were disappeared by the government, most of whom were Sinhalese. Whilst there has been some effort to unify the families of the disappeared across the island, these have not been universally successful. Dharsha Jegatheeswaran argued that whilst both communities could recognise the other’s suffering, their aims are different, as Tamil families have overwhelmingly rejected government compensation and demand accountability for disappearances which are recent and raw.

The panellists also discussed the anti-government protests taking place across the island, particularly at Galle Face in Colombo, in the wake of the economic crisis in Sri Lanka. Nalini Sivathasan and Dharsha Jegatheeswaran highlighted the conflicted feelings that many Tamils have towards the protests, both in Sri Lanka and in the diaspora. Whilst many sympathise with the protesters’ call for the Rajapaksas to be removed from power, there is a feeling that these protests deal solely with economic concerns, and that many Tamils’ long-term grievances against the government are not being addressed. Nalini Sivathasan also highlighted the failure of the international media to capture these grievances, or to delve into the deeper structural problems in Sri Lanka highlighted by some protestors.

Whilst panellists did express reservations about the inclusiveness of the protests, there have been encouraging signs. Alan Keenan praised some of the statements that had been made by cross-community civil society organisations, which have highlighted the connection between the crisis of accountability in the country, whether regarding economic mismanagement or the violation of human rights. Kannan Arunasalam highlighted the small but important gestures that the protestors in Colombo had made to highlight the grievances of the Tamil community, such as when some protestors carried placards which called for an investigation into the deaths of Tamil journalists. Nalini Sivathasan, and many attendees, pondered whether such community outreach would continue once the crisis ended, or whether this was a fleeting moment of relative unity.