The Paranagama Commission has done great damage. Now that damage must be repaired

The ‘Presidential Commission to Investigate Complaints Regarding Missing Persons’, otherwise known as the ‘Paranagama Commission’ or the ‘PCICMP’, was an unusual body which has taken at least three different forms since its establishment by President Rajapaksa in August 2013. Whilst failing in each, it has succeeded in doing considerable damage to the level of trust war survivors have in Sri Lanka’s reconciliation process.  This damage must be repaired if the Office of Missing Persons that ought to replace it is to ever restore that trust.

Yet while the Paranagama Commission’s mandate may have finally come to an end, and the chair of the Commission accepts that its work is finished, it is still applying for further extensions and continues to offer unwarranted and legally unsound opinions with the aim of exonerating the Sri Lankan Government of war crimes.

In the article below we explain what the Paranagama Commission was and argue that the Sri Lankan government must now seize the opportunity to make a break with its toxic legacy. The lack of clarity over the Commission’s current status helps no one and it should be made clear as soon as possible that the Commission will not play any part in Sri Lanka’s future.

The first mandate: disappearances – inaction and a refusal to listen 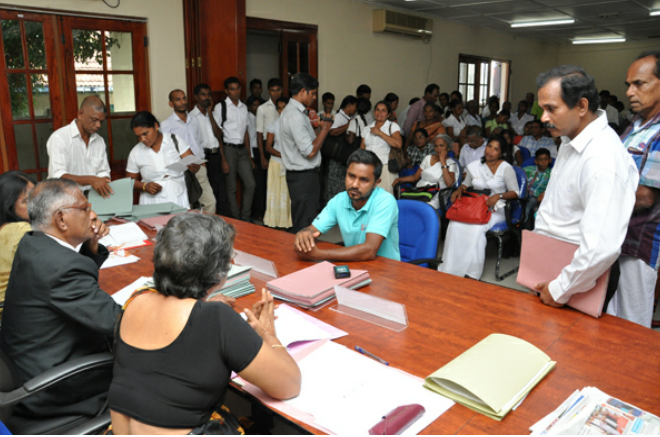 The Paranagama Commission was initially constituted to investigate the many cases of disappearances that took place during Sri Lanka’s civil war – a war in which the Sri Lankan Government, the Tamil Tigers, and various paramilitary groups – are accused of abducting many thousands of people who were never seen again.

The Paranagama Commission received 24,000 complaints relating to disappearances. Due to a lack of resources, in 2014 the Centre for Policy Alternatives estimated that it would have taken the Commission 13 years just to hear these complaints, let alone investigate them.

Our reports into war survivors’ views of the transitional justice system have shown that this process has had a devastating effect on war survivors’ trust in any kind of government backed investigative mechanism. Indeed, the Paranagama Commission has taken on a special meaning for many war survivors as shorthand for Governmental disingenuity.

Sri Lanka’s UN mandated transitional justice process calls for the creation of an Office for Missing Persons (OMP), and plans have been tabled for its creation. This office will seemingly replace the Paranagama Commission’s role in investigating disappearances, although it is not clear if, and how, cases will be transferred and information safeguarded. Families of the disappeared will want reassurances that the OMP will not repeat the mistakes of the Paranagama Commission.

In August 2014 the Paranagama Commission was given a second mandate to investigate allegations of war crimes. As we wrote at the time, it was clear that this was not to be an impartial and credible process, and indeed so it proved.

The Paranagama Commission filed a report in September 2015 in which it attempted to draw a new line of defence around the Sri Lankan Government, protecting them from culpability with respect to war crimes. Finding that allegations of war crimes were now undeniable, the Paranagama Commission instead attempted to allege that these crimes were the work of a few ‘bad apples’ and that they did not amount to systemic crimes.

As we wrote at the time, this view was excoriated by international legal experts who found that the report was based upon misquoted and misrepresented sources, and that its legal analysis was based upon a misunderstanding and misapplication of the law.

The report has in any case been rendered irrelevant by the United Nations own ‘OHCHR Investigation into Sri Lanka’ (OISL) report, which is now the primary reference point for discussions of the issue, and the basis for the justice and reconciliation programme the Sri Lankan Government has embarked upon. The report is highly critical of the attitude of the Paranagama Commission (paras 512-524); and indeed of all Presidential Commissions of its kind towards the question of war crimes (paras 1175–1264). It is also very clear that, contrary to the claims of the Paranagama Commission, these crimes were systemic in nature. To quote UN High Commissioner for Human Rights, Zeid al-Hussein:

“The sheer number of allegations, their gravity, recurrence and the similarities in their modus operandi, as well as the consistent pattern of conduct they indicate, all point towards system crimes.”

Even the Government of Sri Lanka have been equivocal about using it as a defence. Speaking this spring, President Sirisena first denied that the Paranagama commission report was an official report of the Sri Lankan Government, and then suggested it had only been released in order to demonstrate how badly the previous Rajapaska regime had handled the issue.

Having failed with respect to both its core mandates – and moreover, with its first due to be transferred to another body and its second concluded – it would be reasonable to expect that the Paranagama Commission would have disbanded in the autumn of 2015. The UN working group on disappearances joined families of the disappeared in calling for this to happen. Yet it received two further mandate extensions,  applied for a third, and is now applying once again.

During that time it published almost monthly press releases, seemingly unsolicited, giving the impression that the Commission had become a kind of lobbying group, actively advocating for a particular approach to reconciliation in direct opposition to that which the Sri Lankan Government has signed up to as part of its UN mandated process. In particular, recurring themes of the Commission’s advocacy were that:

i) There should be no international involvement in a justice mechanism in Sri Lanka.

This is a view which has been comprehensively rejected by war survivors, by the United Nations’ authoritative OISL report, and by the UN mandated process that the Government of Sri Lanka itself has signed up to.

ii) That “the Commission has dealt extensively and in detail with … the genocidal figure of 40,000 civilians killed in the final weeks of the war … [and] showed a significantly low figure of casualties which makes the allegation … a myth”.

This statement was repeated in different forms across a number of recent releases; additionally, very similar wording is used in statements made by the Commission’s erstwhile chief legal advisor Desmond de Silva in his post-commission advocacy.

The statement is incorrect in a number of ways. Aside from the fact that it misrepresents the concept of genocide – a crime of intent – as a matter of scale, it claims an authority and credibility in disputing the casualty figures that neither the nature of the commission nor the methodology it employed, warrant.

Credible allegations point to a wide range of figures for civilian casualties in the final stages of the war. The range runs from the tens to the hundreds of thousands. In disputing these figures the Paranagama Commission have done little more than recite the arguments frequently used by war crimes apologists over the last seven years. Yet it is simply not possible to pronounce on the numbers with such certainty. The authoritative account of the war’s end, the United Nations’ OISL report, states that:

“Counting or estimating the exact number of civilian casualties during the different stages of the armed conflict is impossible without full access to the areas and communities affected, in particular in Sri Lanka. Yet, on the basis of the information compiled by OISL, there is no doubt that thousands, and likely tens of thousands, lost their lives, indicating the widespread scale of the attacks. The patterns of commission of gross human rights violations and serious violations of international humanitarian law, the indications of their systematic nature, combined with the widespread character of the attacks all point to the possible perpetration of international crimes.” 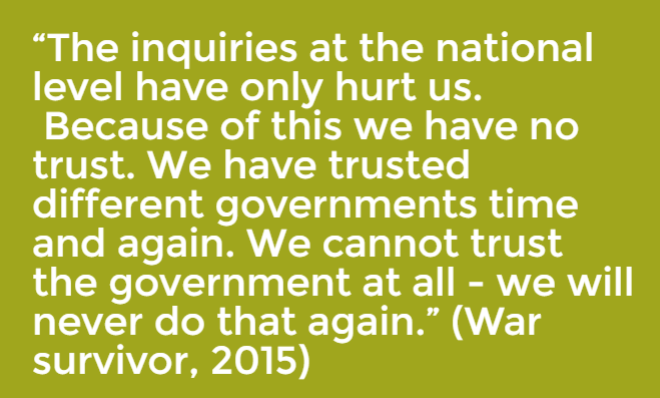 Equivocation over the status of the commission aside, the Government has not distanced itself from the Paranagama Commission’s arguments, and this is a very serious matter. As we indicated in our latest report one of the biggest barriers Sri Lanka faces in dealing with the past is the denialism and defensiveness of the Sri Lankan Government. For the process the Government has embarked upon to be successful they must acknowledge that terrible crimes took place in Sri Lanka, recognise that they need to be seriously addressed, and attempt to persuade the majority population of that fact.

By continuing to entertain the alternative to reality offered by the Paranagama Commission, the Sri Lankan Government demonstrates a lack of commitment to the process of dealing with the past which could prove terminal.

If the Paranagama Commission needs an extension to its mandate in order to ensure a smooth handover to the Office of Missing Persons and to meet its duty of care to the families of the 24,000 missing persons, then that may be appropriate. However it would be entirely inappropriate for such a tarnished and discredited process to seek any future role in Sri Lanka’s emerging truth, justice and reconciliation processes. Our concern about the Commission’s latest statement (making the dubious claim that use of cluster munitions in areas where large numbers of civilians were concentrated is legal) is that the Commission seems to consider itself to be of continuing relevance to these future processes. 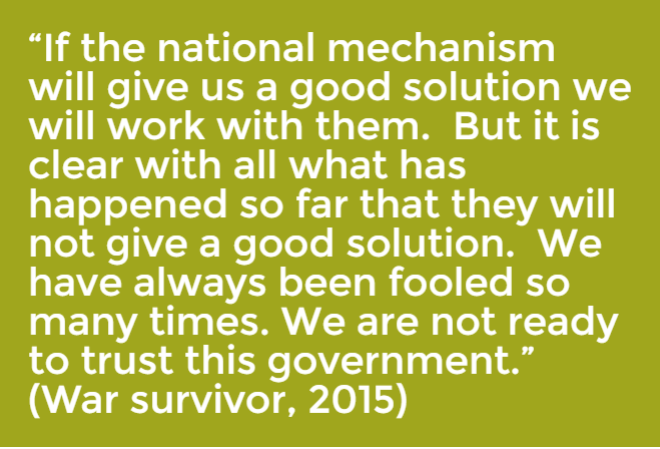 In our latest report we talk about the concept of lustration: the process whereby individuals associated with the leadership of a state or group complicit in mass atrocities are retired (voluntarily or forcibly) from service in order to allow a new, less tainted, generation of leaders to emerge. Lustration is a concept that is usually applied to political or military figures.  However, in a country such as Sri Lanka, where dealing with the past is complicated by a past history of sophisticated whitewashing processes masquerading as investigations (a process summed up by Amnesty International in the title of their report “20 years of make believe”), it is also necessary to apply it to those complicit in the systemic denial of war crimes.

For Sri Lanka to move on from its past, it must acknowledge it. The Paranagama Commission has served only to prop up a sense of denial designed to avoid coming to terms with that past. For this reason, the Commission – and those who employ its arguments – should not play any role in Sri Lanka’s future.