Political prisoners; something must be done 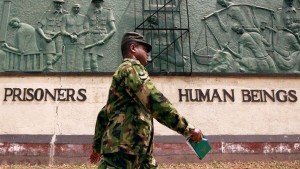 On Monday, over 200 Tamil prisoners began a nationwide hunger strike. They are pressing for release, and protesting against the draconian Prevention of Terrorism Act (PTA) under which many of them are held.

The term political prisoners is used because of the total absence of due process, as well as the evidence of political persecution apparent in the Sri Lankan government’s wildly varying standards of justice (many senior terrorist suspects are at liberty and were until recently cabinet ministers). Many of these individuals have served long periods in detention without formal charges being brought against them. A significant portion continue to be held on the extraordinarily broad grounds provided for by the terms of the PTA, including simply ‘encouraging’ or ‘supporting’ the LTTE –  a charge that could be levied against much of the population of LTTE occupied areas, many of whom had little choice in the matter.

As a recent report by Sri Lankan human rights organisation Watchdog highlights, among the 181 PTA detainees officially accounted for:

It is in the context of these appalling figures, and the government’s failure to push forward a clear agenda for resolving the issue of arbitrary detention, that this latest action takes place.

In its September report on the human rights situation in Sri Lanka, the Office of the High Commissioner for Human Rights made a set of clear recommendations to the Government of Sri Lanka to begin a serious review of the PTA (with a view to its repeal) and to take steps to either release or bring to trial those held under it. So far – and despite the Government endorsing this idea in the resolution they cosponsored – no major changes in policy direction have been announced.

Yesterday, the President did respond by ordering a Ministerial report into the matter, upon which a further decision would be made. But much more is needed. With the facts of PTA detention already well known and established in government, and now with a strong mandate for action provided for by the text of the recent UN resolution, there is a clear opportunity for the government to mark a break with past by implementing an immediate review of all of the cases before it – and for those individuals to be released, bailed or put on trial.

As the strike moves into its fifth day, and with reports emerging of several hospitalizations already resulting from it, it should be remembered that the PTA is not merely the source of enormous suffering and injustice by those held under it – it is also a major obstacle to the sort of trust between the Tamil community and the Sri Lankan Government that any process of national reconciliation will require. Whether the government now uses this moment to change tack will be a litmus test for whether it is willing to realise in deeds those commitments made on paper in Geneva.