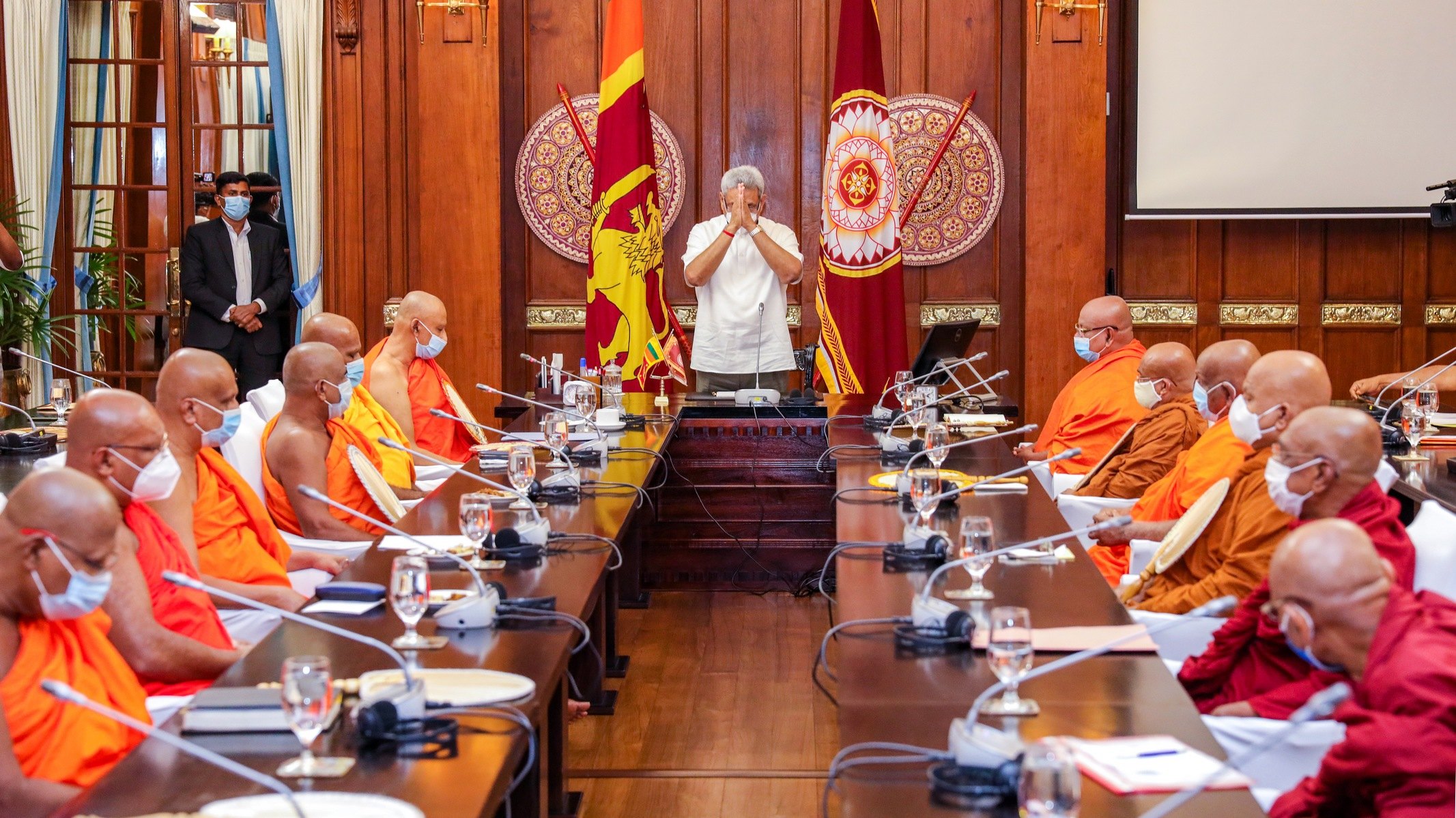 On 2 June 2020, whilst the Sri Lankan parliament had been dissolved since March pending delayed elections, President Gotabaya Rajapaksa announced the formation of two new Presidential Taskforces. One of these Taskforces, ‘for Archaeological Heritage Management in the Eastern Province’, was established to identify, preserve and manage important archaeological sites in the East.

The Taskforce is entirely Sinhala in its composition, despite ethnic Sinhalese making up less than a quarter of the Eastern Province’s population. The President appointed several Buddhist monks, and yet could not find room for any representatives of other faiths, or any non-Sinhala archaeologists. Professor Jagath Weerasinghe, an archaeologist at Kelaniya University, claimed that there were several qualified Tamil archaeologists already working in the East who could have been appointed to the Taskforce. One of the monks appointed to the Taskforce, the Ven. Panamure Thilakawansha Thero, has previously been accused of encouraging Sinhalisation in Eastern Province. The Chairperson of the Taskforce, the Ven. Ellawala Medhananda Thero, published a book about the ‘Sinhala-Buddhist heritage’ of the North-East in 2005, and claimed ’99.9 percent’ of archaeological sites in the East were Buddhist. Medhananda claimed to have identified 2,000 sites of ‘Buddhist heritage’ in the province; if the objective of the government really was to protect cultural heritage, would the Taskforce not also seek to identify sites of importance to the Province’s other communities? And why would its jurisdiction be limited to the East alone?

Very little information has been provided about what exactly the Taskforce has been doing. Given the vague mandates of Presidential Taskforces and the lack of Parliamentary oversight, there are very few checks on their power, and no requirements for public reporting on their activities. The Taskforce was reportedly launched ‘with the support of the Department of Archaeology’; it remains unclear to what extent the Department remains independent of this new body.

There have been concerning reports about the Archaeology Department’s activities in the North-East since the establishment of the Taskforce. Tamils in Batticaloa, for instance, registered their concern in April that the Archaeology Department was laying claim to their place of worship after officials had placed stones around a local Hindu temple, the Kusalanamalai Kumaran Kovil. This concern is understandable, given reports coming from neighbouring Northern Province, where Tamils are the largest community. In December 2020, the Archaeology Department filed a case against the trustees and the priest of the Athi Lingeswarar Kovil in Vavuniya, claiming that the site has a Buddhist origin. The department has also been active on Kurunthoormalai in Kumalamunnai, Mullaitivu District, home to the historic Athi Aiyanar Kovil, which has seen confrontations between Hindus and Buddhists since at least 2018. In January 2021, members of the Department, accompanied by soldiers and the State Minister for National Heritage Vidura Wickramanayaka, travelled to the site of the Tamil temple at Kurunthoormalai, where they placed and consecrated a Buddha statue and removed a Siva trident. The Tamil National Alliance (TNA) has since taken legal action against State Minister Wickramanayake, which has not prevented the Archaeology Department from claiming 400 acres of land around Kurunthoormalai. Whilst the Department has intervened in such matters before, such as when it attempted to excavate and erect a Buddhist Stupa at a Ganesha Kovil in Konniya in July 2019, it appears to have become increasingly active in the North-East since June 2020.

#SriLanka continues to use state institutions — archaeology department, military, forest department, and police — as instruments in its state-sponsored Sinhalization agenda. Yesterday the GoSL openly demonstrated its involvement in the #Mullaitivu land grab.

Religious sites in Sri Lanka have been contested spaces between the majority Sinhalese Buddhists and the island’s non-Buddhist communities for some time, and the state has consistently failed to protect non-Buddhist sites. In September 2019, a group of Buddhist monks cremated Kolompae Methalangathara Thero at the Neeraviyadi Pillayar Kovil in Chemmalai, Mullaitivu; Methalangathara had long campaigned to convert the temple into a Buddhist site. Whilst a court order had been issued prohibiting the cremation, the Mullaitivu Bar Association alleged police did not implement the court order, and TNA MP Shanthi Sriskandarasa claimed that police instead protected the monks and did nothing to stop the cremation.

The Sri Lankan army also has been heavily involved in building Buddhist temples for their own use in the North-East, with 14 of Sri Lanka’s 21 divisions deployed in the Northern Province alone. The Sri Lankan army is almost entirely Sinhala, with army divisions regularly receiving blessings from Buddhist monks. Reports suggest that the military built a Gamunu Vihara for a military base on land owned by the local Murugan Kovil near Thaiyiddy, Jaffna District. The army is further alleged to have demolished Hindu and Catholic buildings in Myliddy, a town which was under military occupation until 2017. These includes the historic 400-year-old Varasithi Vinayakar Kovil and 200-year-old St. Mary’s Church; another temple was allegedly demolished to build a hotel.

These suggestions that Buddhist temples are being constructed across the North-East fits with a concerning pattern being reported in these provinces. Over the past few years, the human rights group People for Equality and Relief in Lanka (PEARL) has been publishing articles about the reported ‘Sinhalisation’ of the North and East. Several Tamil MPs expressed their concerns about the ‘artificial alteration of the demographic pattern’ of the Northern Province in a letter to the Internal Security Minister in October. Last week, Tamils in Vavuniya, including politicians, protested against what they see as government-sponsored Sinhalese settlement in the North-East. Recently, Tamil Catholic leaders told the Swiss Envoy that they believed the government was attempting to alter the demographics of the region through Sinhalese settlements; this was a rare intervention by the Catholic hierarchy and is a measure of how much concern exists among the local population. These concerns are not new; under former President Mahinda Rajapaksa, there were reports of Sinhalese settlement of the North and East with army support from 2009 to 2015.

It is not unexpected that contested religious spaces would exist in a country as diverse as Sri Lanka. However, it is very concerning that the government and armed forces are explicitly partisan actors, who intervene on behalf of Buddhism in these conflicts and build their own Buddhist shrines. Under the problematic Article 9 of the Constitution, the President has a duty to give Buddhism “foremost place” in Sri Lanka, and this President has embraced Sinhalese Buddhist nationalism wholeheartedly. He has affirmed his prioritisation of Buddhism and defied tradition by being sworn in at the Ruwanweli Seya – one of the most sacred Buddhist sites in Sri Lanka.  Given this clear partiality, the President should not attempt to exercise control over the archaeological excavation of contested religious spaces, but particularly in Sri Lanka’s North and East, where there are tensions between communities and Buddhists are in the minority. Given Sri Lanka’s post-independence history, with important buildings in the North-East – such as the Jaffna Public Library – having been destroyed before and during the Sri Lankan civil war, an effort to protect sites in this regions would be valuable. However, genuine and non-partisan archaeological preservation cannot possibly take place under the auspices of this Sinhala-Buddhist majoritarian government.