Rajapaksa has lost, the transfer of power must be peaceful 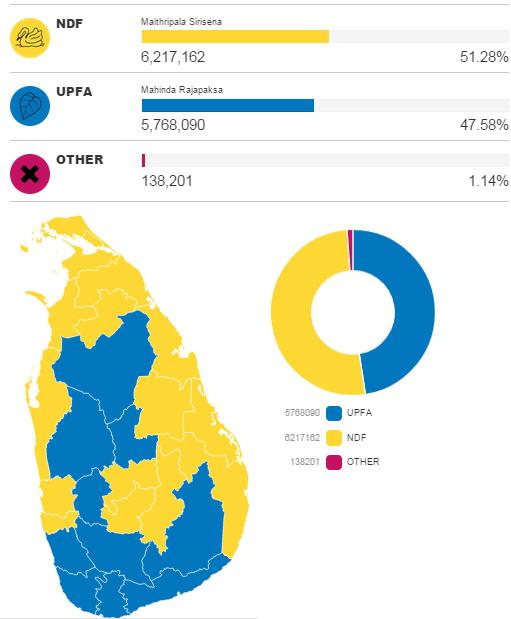 Multiple credible news sources are reporting that President Mahinda Rajapaska has conceded defeat in Sri Lanka’s presidential elections. At the time of going to press provisional results had common opposition candidate, Maithripala Sirisena, in the lead by 52% to 47%. This ends the authoritarian reign of South Asia’s longest-serving ruler.

The bitterly contested election was marred by violence, abuses of state power and fraud – hallmarks of the Rajapaksa regime. In the lead-up to the vote, the Campaign for Free and Fair Election received over 1,200 complaints of election law violations. The Centre for Monitoring Election Violence documented over 400 incidents – including armed attacks. The Commonwealth Observer Group reported concerns about military intimidation, particularly in the north of the country. Opposition supporters were harassed and human rights activists threatened. The severed heads of dogs were nailed to the homes of two campaigners.

Now that the elections are over there is a very real risk of reprisals against journalists, human rights activists, and Sirisena supporters. The result has done nothing to reduce this risk. The international community must make it very clear to Rajapaksa and his supporters that any such reprisals will have severe consequences for Sri Lanka’s foreign relations – and for them personally if they have assets abroad or wish to travel there.

Meanwhile Sirisena has promised to lead a “compassionate” and inclusive government. He has pledged to crack down on corruption and nepotism, abolish the executive presidency, restore the independence of the judiciary, respect human rights and democracy and safeguard the media.

Many are rightly sceptical. In some ways, he is a more authentic version of Rajapaksa’s populist nationalist persona. He was Defence Minister during the final stages of Sri Lanka’s civil war, and thus must bear at least some share of responsibility for the war crimes committed then. He has ruled out more autonomy for Tamils and said that “no international power will be allowed to ill-treat or touch a single citizen of this country on account of the campaign to defeat terrorism”.

Yet a democratic mandate for him cannot be any more a mandate for impunity than was the previous election victory of Rajapaksa. Only if he makes a firm commitment to dealing with war crimes allegations – with the support of the international community – can he hope to secure a just and lasting peace in Sri Lanka. He would do well to look at the example of the Cote D’Ivoire, among other places, and realise that working with the international community on the question of accountability is the only way to achieve this – perhaps even the only way to ensure that the Rajapaksas do not somehow orchestrate an undemocratic return to power.

The Sri Lanka Campaign calls on world leaders to help Sri Lanka correct its course. This must include strong action at the UN this March, as well as bilateral policies geared towards accountability and human rights.

We must do our utmost to support Sri Lankan activists who have worked tirelessly, and at great risk, in pursuit of truth and justice. We must stand with the people of Sri Lanka who have voted and now must be heard.

Sirisena has been given a mandate to build a sustainable peace. He must recognise that this depends on justice and accountability.

Full results will be available via the electoral commission website: http://www.slelections.gov.lk/