May 18 marks the end of the Sri Lankan civil war. On this day we remember the many civilians who were killed at Mullivaikkal in the final stages of the war.

In the final months of the war, tens of thousands of Tamil civilians were killed, the majority by deliberate shelling from security forces targeting areas where civilians were sheltering, including hospitals and food distribution points. The UN has credibly estimated that as many as 40,000 to 70,000 civilians were killed in the final stages. Civil society groups suggest the total could be much higher, with up to 147,000 people unaccounted for.

This memorial image is dedicated to victim-survivors of the 26-year war and their indescribable perseverance in the pursuit of justice. Although people from all communities were affected by war, a large majority of victims were Tamils. Several elements have been incorporated to symbolize the dehumanizing struggle of Tamil victim-survivors and ongoing human rights abuses against Tamils and Muslims in Sri Lanka. 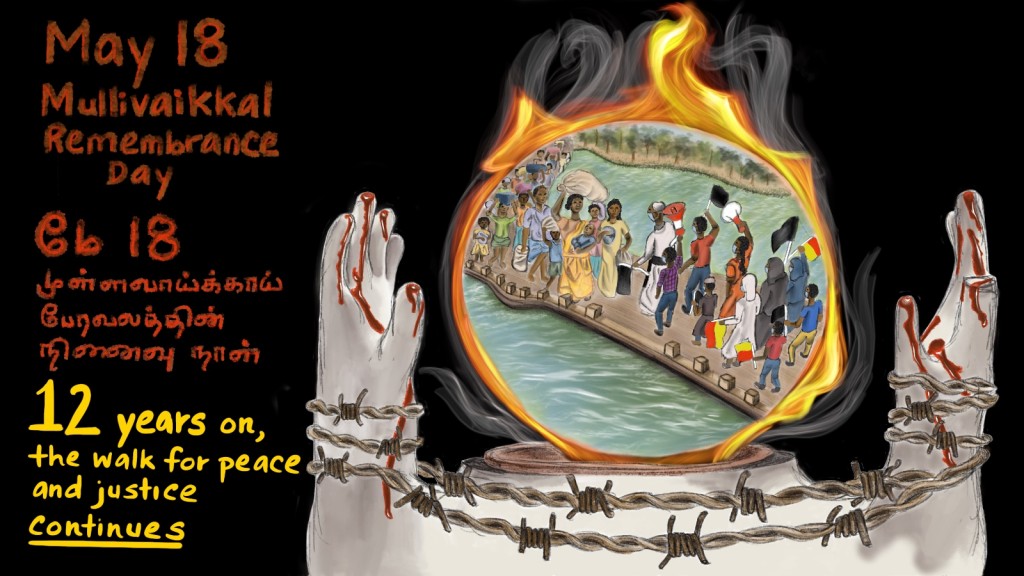 The hands of the Mullivaikkal memorial monument are bound by barbed wire to symbolize the inhumane detainment of Tamils in government-run internally displaced persons (IDP) camps and rehabilitation centres for months and even years in the aftermath of the war. Systematic and widespread rape, sexual and physical torture, and enforced disappearances of Tamils by Sri Lankan security forces and paramilitary groups occurred in sites such as IDP camps, rehabilitation centres, and military camps. Since the war there have been persistent credible reports of abductions, torture, and sexual violence of Tamils by the security forces.

The barbed wire also symbolizes the Sri Lankan government’s crackdown on Tamil memorialization events since the Rajapaksas’ return to power in 2019, including the demolition of a memorial for Tamil war victims in January 2021. The Rajapaksa government has suppressed basic human rights of Tamils and Muslims in the Northern and Eastern provinces – including the right to memory, the right to peaceful assembly, the right to not be subjected to arbitrary arrest and detention,  and the right to freedom of religion.

The procession of Tamil war victim-survivors on the Nandikadal causeway over the Nandikadal lagoon represents the last escape route for civilians in the final days of the war, by which civilians left the war zone to enter government-held territory. This weary procession also signifies the persistent demands for truth and accountability made over the past 12 years by activists and Tamil families of the disappeared in the face of extreme surveillance, intimidation, threats, and arrests by state security forces and intelligence agencies.

In the Pottuvil to Polikandy (P2P) protest of early February 2021, Tamils and Muslims marched together across the Northern and Eastern provinces of Sri Lanka, including crossing the Nandikadal causeway. Many of the protestors were war victim-survivors who crossed the causeway 12 years ago. This was a  powerful gesture to the incessant demands of justice for wartime atrocities made by survivors amidst a climate of entrenched impunity.  The protesters demanded an end to abuses including ongoing militarisation, enforced disappearances, land grabs and Sinhalisation in Tamil areas, forced cremation, intimidation of activists, and the use of the Prevention of Terrorism Act to detain people without trial. This image depicts the P2P protestors receiving the Tamil war victim-survivors of 2009 on the causeway, to symbolize the endurance and resistance of a community that has been denied truth and justice for over a decade.

On May 12, the first day of Mullivaikkal Remembrance Week, the memorial monument at Mullivaikkal was vandalized overnight. Tamil community leaders believe police and security forces were responsible, as the monument and surrounding area was being guarded by police and army personnel. The Sri Lanka Campaign for Peace and Justice condemns this shocking act of vandalism and repression.