Repression of dissent on the rise as Sri Lanka nears elections

INFORM Human Rights Documentation Centre have just released their regular monthly report on repression of dissent in Sri Lanka for the month of May. It records an alarming uptick in incidents when compared to previous months.

The graphs below illustrate some of the key findings: 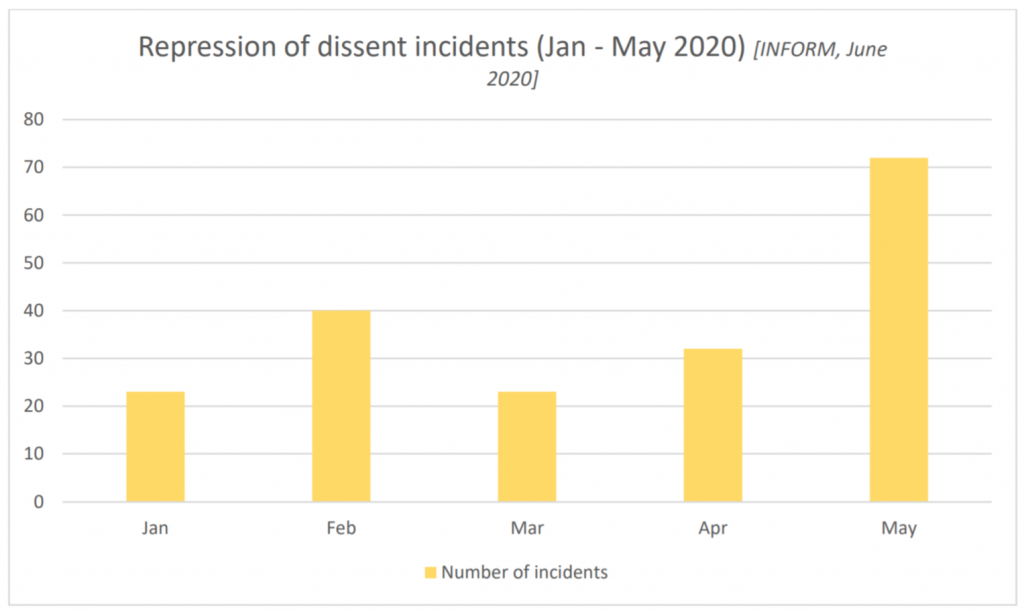 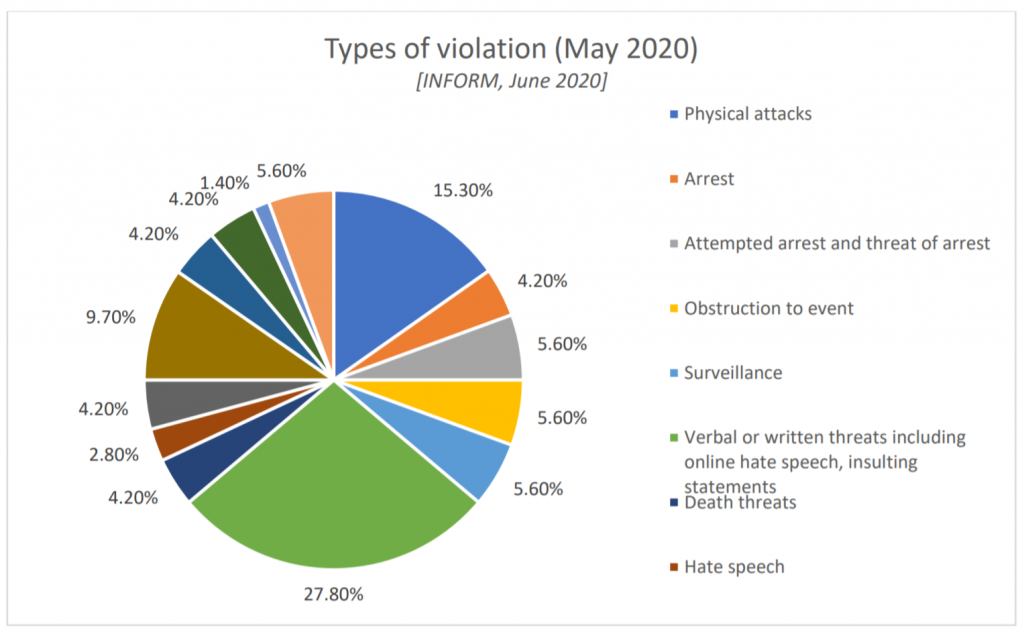 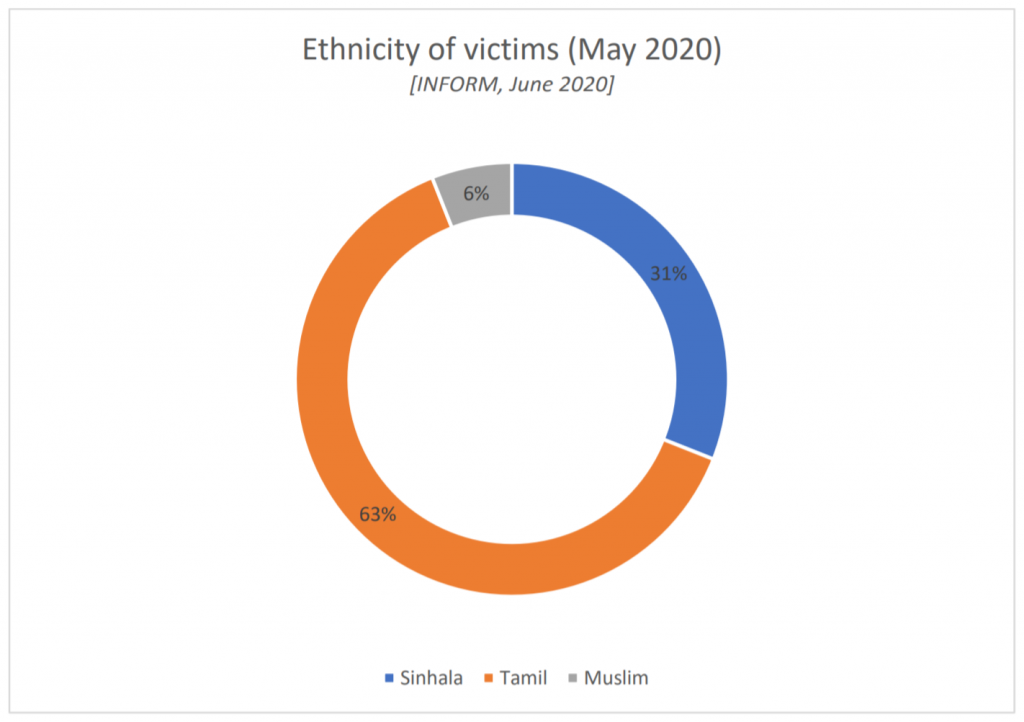 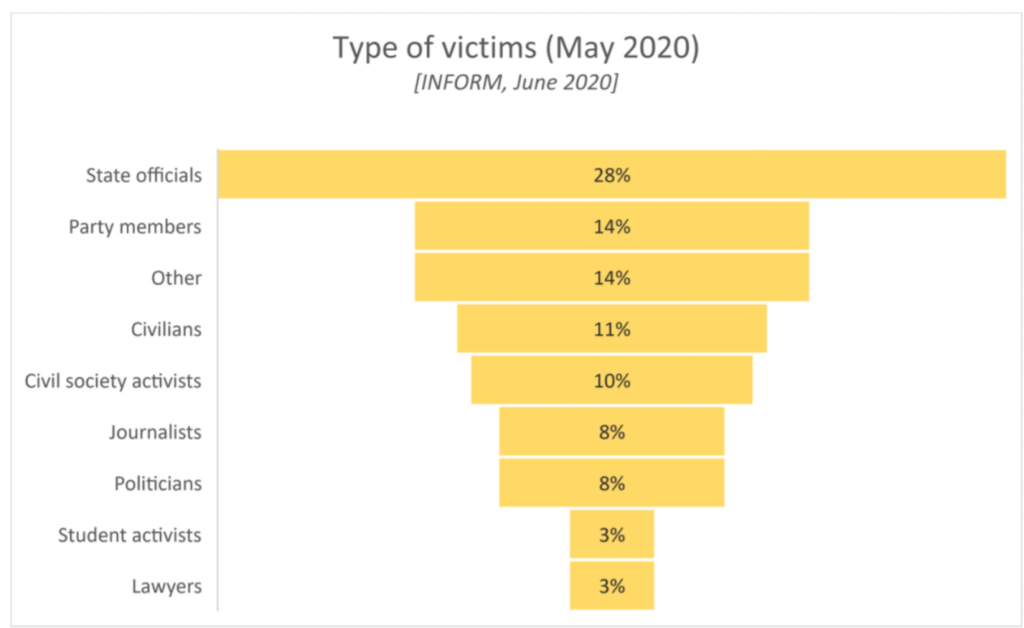 As INFORM note in their report, both the increase in incidents for the month of May – and the disproportionate targeting of Tamils – may be linked to last month’s Mullivaikkal remembrance activities commemorating the tens of thousands of Tamil civilians who were killed at the end of the civil war in 2009. The days around 18 May saw large numbers from that community harassed, threatened, and intimidated while organising or participating in remembrance events.

These trends coincide with what we described several weeks ago as Sri Lanka’s ‘authoritarian slide’, which has seen the prolonged dissolution of Parliament and the increasing concentration of power into the hands of several highly militarised ‘Task Forces.’ They also come as Sri Lanka gears up for a high-stakes Parliamentary election on 5 August.

Worryingly it has recently been reported that those elections will see a reduced presence from international election observers, in view of the challenges posed by the ongoing health crisis. If those reports are accurate, that would be an incredibly risky – and potentially very dangerous –development. Sri Lanka’s most recent election in November 2019, although largely peaceful, witnessed a disturbingly high number of non-violent electoral violations, as well as some violent attempts to prevent those from minority communities from casting their vote. With Sri Lanka’s state machinery now in the hands of Gotabaya Rajapaksa – a brutal authoritarian with a proven disregard for democracy and the rule of law – the chances of serious electoral irregularities are even greater. Few commentators are in doubt that Gota is likely to use every means at his disposal to maximise his party’s vote share and obtain the desired two-thirds parliamentary majority that would enable him to amend the Constitution.

With Sri Lanka’s civic space s disappearing at an alarming rate, and with Gotabaya in the steering seat, now is absolutely not the time for outside observers to take a back seat. They must reject attempts to use the pandemic as an excuse for further erosion of Sri Lanka’s democracy.  To help ensure that Sri Lanka’s elections are not only free and fair, but also peaceful, they must show up.