Now unfortunately friends in Sri Lanka have sent us this update.

With great sadness, we share that this morning, the police exhumed the remains of the body suspected to be of disappeared friend and colleague, Pattani Razeek, who was the Managing Trustee of Community Trust Fund (CTF) and Executive Committee member of FORUM-ASIA, and disappeared on 11th February 2011.

Based on information provided by one of the arrested suspects, Mr. Ismail Mohamed Musdeen, the body that is believed to be Razeek’s was exhumed today morning, in Kavathamunai, Oddamavadi, Valachenai (Eastern Sri Lanka). Police had been in the area since Monday, 25th July.

Kavathumunai is the village of Musdeen. Musdeen is believed to be a close associate of former Minister Ameer Ali, and having close links with present Minister Rishard Bathiudeen and Mr. Shahabeen Noushadh, the person identified by the Police as the chief suspect about a year ago, and finally arrested on 8th July 2011. Noushadh remains in Police custody todate. According to available information, Musdeen was arrested on 13th July 2011. Musdeen’s wife is reported to have approached Minister Bathiudeen to obtain Musdeen’s release, but is reported to have said that he doesn’t want to get involved.

The body was not in state that we could identify. Razeek’s son tentatively identified the body. Subsequently, the body was sent to Batticaloa hospital, where it will be kept until the post mortem is expected to be conducted Tuesday, 2nd August 2011, after which the remains would be released to the family.

We will keep you updated of any further information. 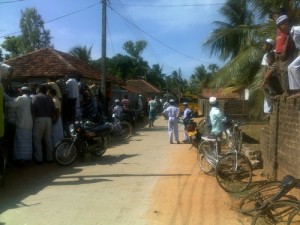 Villagers look on during the dig for Patani Razeek.