Salley has been released! But now the lying game starts

Last week we asked for your help securing the release of the Muslim politician Azath Salley. He had been thrown into jail under the draconian Prevention of Terrorism Act. Under this Act no evidence is required and the suspect does not even usually get to see what they are charged with. In Salley’s case we were actually able to get hold of the order: 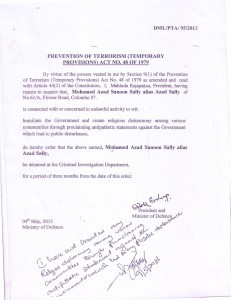 As you can also see Salley himself denied all the allegations in a signed statement he made at the bottom of the order. But of course, as no evidence is needed he was detained anyway. It is also almost certain that this wasn’t the real reason for his detention. That is more likely to be linked to his advocacy against the anti-Muslim Buddhist extremist group the BBS.

The good news is that after a powerful campaign by local activists and an international campaign Salley was released. However the Government of Sri Lanka immediately started a disinformation campaign, stating that Salley had confessed to his crimes in a sworn affidavit with some even going further and suggesting he was a dangerous Islamic terrorist.

However the affidavit Salley signed is freely available online and, as you can see, it does no such thing:

It is great news for Salley and his family that he has been released. But it is a disgrace that the Sri Lankan Government continue to use the media to discredit and attack them, while making no effort to censure the Buddhist extremists of the BBS who actually do incite racially motivated violence and hatred. The message is clear – that the regime will use the courts to stifle and suppress dissent while protecting the government’s admirers.

It is also appalling that under the Prevention of Terrorism Act people can be detained indefinitely without charge, without evidence, and often without being told what they have been accused of. And most shocking of all is that the man who signed the document ordering Salley’s detention will be made Chair of the Commonwealth in six months time.