The war ended more than ten years ago and I’ve heard that Sri Lankans want to move on – aren’t things better now?

While the war is over, the government of Sri Lanka is yet to take the steps necessary to bring about a just and lasting peace in Sri Lanka. To date, not a single person has been brought to justice for war crimes and crimes against humanity alleged to have been committed by both sides in the conflict. Indeed, many alleged perpetrators continue to occupy some of the highest offices in the country.

Despite promises made by successive governments to deal with the legacy of the war – and indeed, some very limited progress in a few areas – action has fallen far short of what is needed. Survivors and war-affected communities continue to demand truth, justice, compensation, and guarantees of non-recurrence, despite attempts to intimidate and silence them. Families of the disappeared await answers about their loved ones, but investigations are painfully slow despite the government acknowledging that some records exist which could help establish the truth. Minimal progress has been made in investigating and prosecuting the so-called ‘emblematic cases’, widely regarded as a litmus test for the state’s willingness to tackle impunity for serious human rights violations. Disturbingly Sri Lanka’s current President, Gotabaya Rajapaksa, has not only pledged to shield members of the armed forces from accountability; he has also begun releasing some of the handful of individuals who have successfully been convicted. 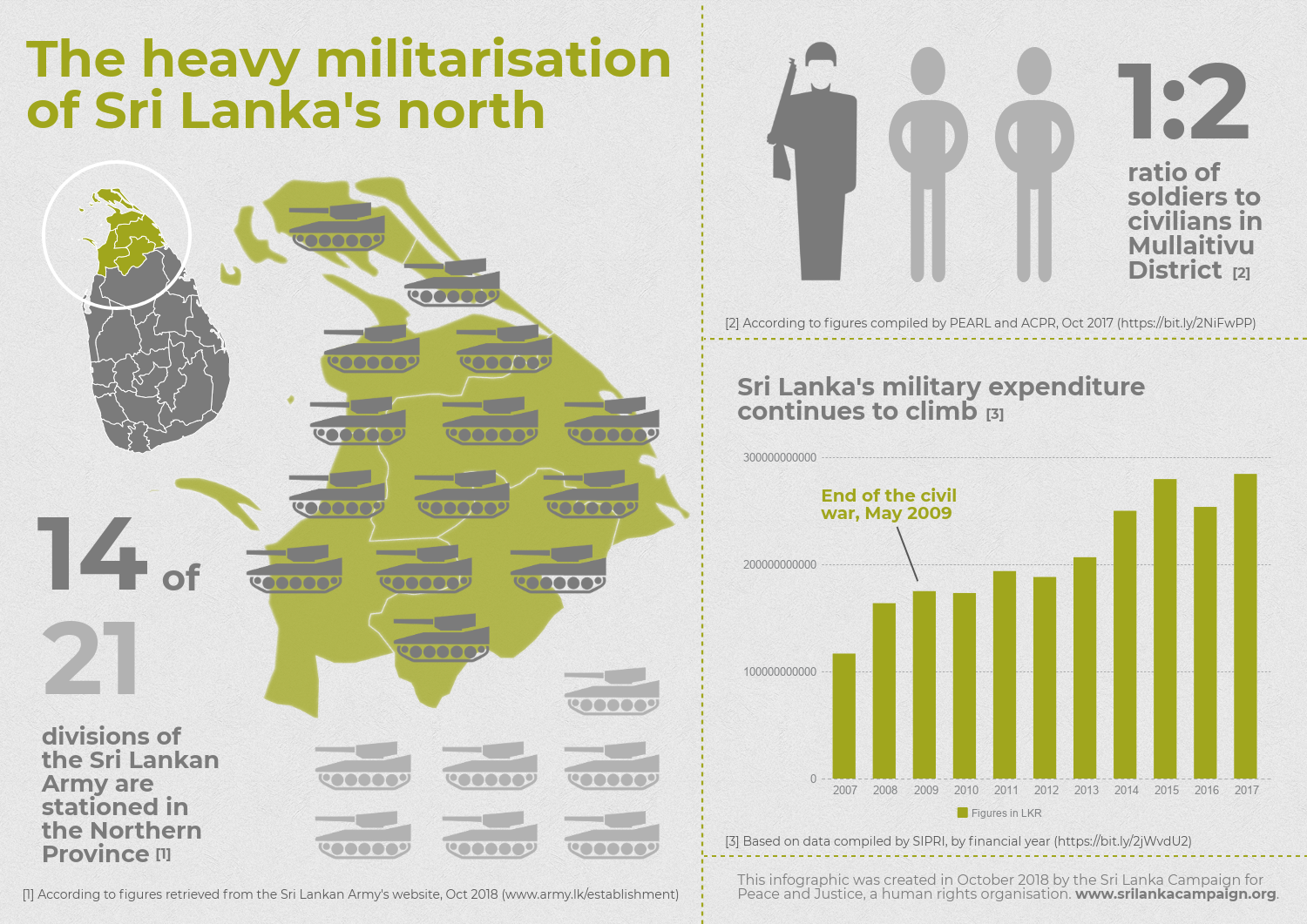 Meanwhile, the situation in the Tamil majority north and east of Sri Lanka remains grim. Although some progress has been made in releasing military-held lands back to civilians, a disproportionate number of Sri Lankan Army camps and tens of thousands of troops remain stationed in the area. In October 2017, researchers estimated the ratio of soldiers to civilians in Mullaitivu, the epicentre of the final stages of the war, to be as high as 1:2. While the period 2015-2019 saw a slight decrease in the visible presence of the military in war-affected areas, recently there has been a resurgence of roadblocks and checkpoints staffed by armed soldiers. Busses are stopped and searched in the middle of the night. The climate of fear is palpable.

Harassment and intimidation of journalists and human rights defenders in the north and east has continued, albeit unevenly, since the end of the war. With the return to government of the Rajapaksa family in 2019, the surveillance, harassment, and intimidation of dissenting voices is intensifying. There are disturbing ongoing reports of the use of torture and sexual violence by state forces, predominantly against Tamils.

As we note elsewhere in this FAQ, these trends are not only of concern to victims and survivors. They also increase the risk that Sri Lanka’s ethnic conflict might one day result in yet more mass violence on the island. That is why a credible truth and justice process that could help facilitate meaningful reconciliation is so important.

You can find updates on the latest human rights situation in Sri Lanka here.