Last week we and a group of other organisations ran a couple of initiatives designed to raise the profile of human rights abuses in Sri Lanka on Twitter.

On Wednesday the President’s envoy on human rights Mahinda Samarasinghe delivered his speech and we were on hand to correct his factual inaccuracies. Sri Lankan civil society also came out with a statement decrying the speech.

Then on Friday we ran a series of co-ordinated tweets drawing attention to the situation in Sri Lanka using the hashtag #UNlk. We were joined by @francesharris0n, @acf_france, @freefromtorture, @cpjasia, and various members of Human Rights Watch.

Using “hashtracking” we can see that the last 250 tweets could have reached a combined total of up to 979,026 people (reach measures the number of tweeters who follow each person who tweeted, so it tends to be an overestimate as obviously not all your followers will be signed into twitter when you tweet) and the phrase #UNlk could have appeared on twitter screeens 4,356,691 times (timeline deliveries multiples reach by number of tweets sent – so again tends to be an overestimate). Here’s a screengrab on which i’ve superimposed the figures you get by hovering. 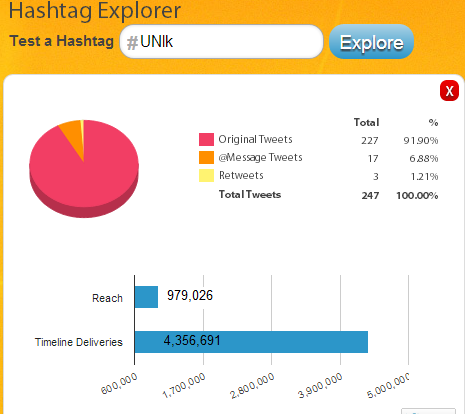 Using “Topsy” you can see that we dominated Human Rights Council both on Thursday and Friday (that highest peak on Feb 21st was the HRC session opening and all the official tweets that came with it).

Note Topsy’s figures will be lower than has tracking as Topsy’s methodology is to ignore all tweets that weren’t either retweeted, or had a link which someone clicked, as irrelevant.

To allow us to keep on running campaigns like this please do consider making a donation by clicking here. So thank you to everyone who took part. And if you are on twitter please continue to follow the story at #UNlk.