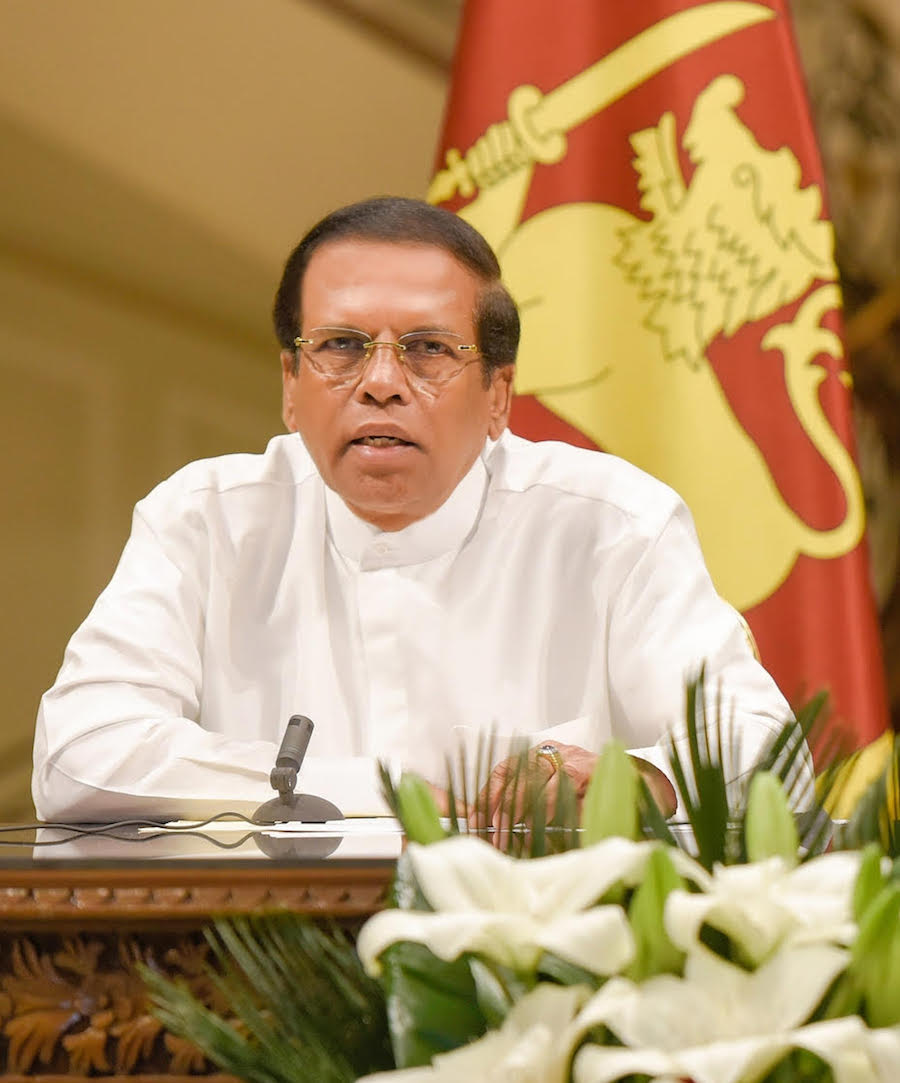 On Sunday evening, President Sirisena issued a statement on national television in which he explained that he had taken the decision to remove Prime Minister Wickremesinghe following differences in “policy, culture, personality and conduct.” The President further explained that decision to ‘appoint’ Mahinda Rajapaksa as Prime Minister was the “only alternative,” in light of frustrations that an alleged recent plot to assassinate Sirisena had not been properly investigated. While not engaging with the substance of arguments put forward by constitutional scholars about the illegality of his recent actions, the President stated that “no constitutional violation was done when appointments were made and [the] removal was enacted … I completely reject the charge that what was done was a violation of the Constitution.”

Shortly afterwards, Mahinda Rajapaksa released a statement in which he called for Parliamentary elections to be held “as soon as possible.”

Meanwhile, Prime Minister Wickremesinghe continued to occupy Temple Trees, despite earlier thinly veiled threats from politicians loyal to Mahinda Rajapaksa that force would be used unless he vacated the premises. Rajapaksa loyalist and MP Wimal Weerawansa had earlier said: “We have filled giant stadiums while in the opposition. Imagine what we can do with state power.”

By late evening, it was reported that the Inspectorate General of Police had ordered the removal of much of the Prime Minister’s security entourage, which was reduced to just ten police officers. A cabinet minister described the Prime Minister’s life as being “under threat” as a result.

There were further reports of efforts by the President to consolidate control of state media, with the appointment of three new heads to Rupahavini TV, ITN and ANCL Lake House. The entire contents of the Prime Minister’s website were deleted and replaced with images of Rajapaksa. There was unconfirmed speculation from a prominent cabinet minister about possible plans to restrict mobile data networks so as to create an “internet blackout”.

In one of the most disturbing developments of the past 48 hours, one person was killed and two were injured after a bodyguard to cabinet minister Arjuna Ranatunga opened fire on a group of pro-Rajapaksa protestors – described by the minister as “a mob” of individuals attempting to kill him – who confronted Ranatunga outside of his Colombo office.

Meanwhile, the United Nations Secretary-General issued a statement calling on the government of Sri Lanka “to respect democratic values and constitutional provisions and process, uphold the rule of law and ensure the safety and security of all Sri Lankans.” A statement by the formal opposition leader and head of the Tamil National Alliance requested that the President “summon Parliament forthwith”. Despite continuing to claim that Rajapaksa commands the confidence of a majority in Parliament, the President has yet to test his assertion by re-convening parliament and allowing a no-confidence motion to be brought.

Civil society organisations continued to express fears about the risk of a violent crackdown against victims’ groups, journalist and activists, particularly those from the minority Tamil community. Local human rights defenders launched a petition urging all branches of the government to “uphold the fundamental rights of its people as enshrined in the Constitution, and fulfil its international commitments on the protection of human rights.”