The past three days in Sri Lanka saw the intensification of public outcry over President Sirisena’s unconstitutional attempt to remove Prime Minister Ranil Wickremesinghe and replace him with former President Mahinda Rajapaksa. On Tuesday (30th October), thousands of protestors gathered peacefully in the capital Colombo to call on the President to immediately re-convene Parliament – and thereby to allow the question of who commands the confidence of a majority of MPs to be settled. A group of civil society representatives delivered a petition carrying that same message to Parliamentary speaker Karu Jayasuriya, who later wrote to the President expressing disbelief at the suspension of the democratic process and warning of a worsening of the crisis.

As of Wednesday (31st October) there were reports that Rajapaksa had secured the support of six additional MPs from the party of Prime Minister Wickremesinghe. Based on predictions about the likely allegiance of several smaller political parties, it is believed that a further nine defections would enable Rajapaksa to claim command of a majority in Parliament. As allegations swirled of vote-buying by the Rajapaksa bloc, on Tuesday the President purported to make a raft of new cabinet appointments, apparently in violation of the constitution.

Q: Which of these cabinet members have been appointed legitimately?

A: None. A legitimate cabinet can only be appointed by the President after dissolution of the existing cabinet (following the passing of a no-confidence vote in Parliament). That has not happened. pic.twitter.com/ZdgAOCg90K

International pressure continued to mount, with the EU and the UK both issuing statements calling on the President to immediately re-convene Parliament. The International Crisis Group released a briefing paper outlining a range of additional options for members of the international community to consider in responding to the crisis, including:

The International Commission of Jurists issued a hard-hitting statement, noting that “the failure to address past abuses, and to fully impleme­­­nt UN Human Rights Council Resolutions 30/1 and 34/1, has helped set the stage for the current political turmoil, and the possible return of an authoritarian figure who has proven his disrespect for human rights and the rule of law over and over.”

The Sri Lanka Campaign began to receive worrying ground reports of increased activity by the security forces in the North and East of Sri Lanka; possibly an indication of the beginning of a wider crackdown. 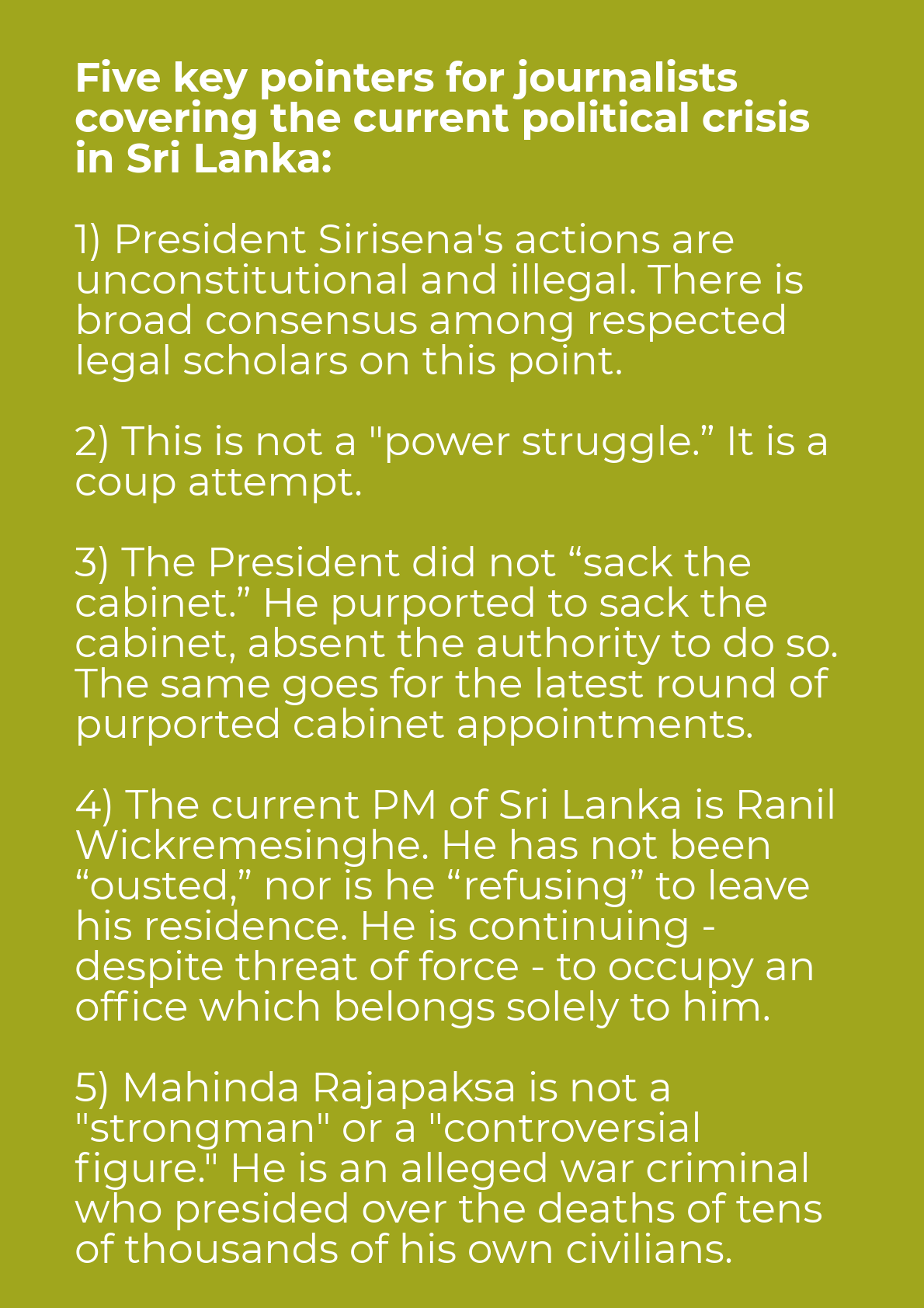 Are you a journalist covering this story?

Frustrated by some of the framing and language adopted in recent media reporting, we have produced a list of five key pointers for those writing about the current crisis. We hope you find them useful. For any further queries, please get in touch.